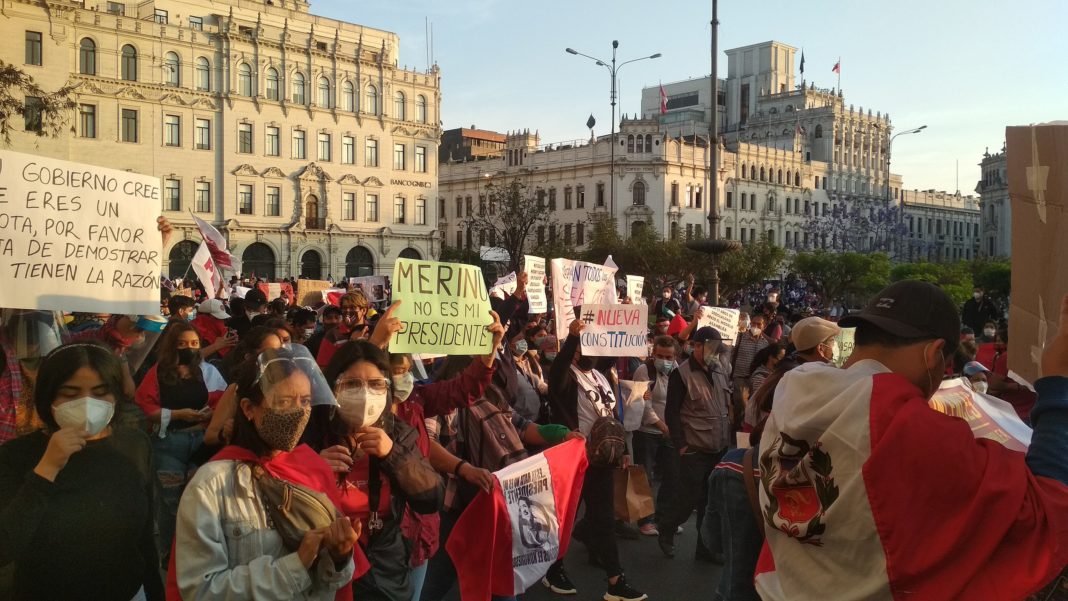 Tens of thousands of protestors have taken to the streets across Peru to protest the illegitimate impeachment of Peruvian President Martín Vizcarra.

The coup comes after years of political turmoil. In the most recent presidential election in 2016, centrist Pedro Pablo Kuczynski (PPK) narrowly won against the right wing candidate Keiko Fujimori, daughter of imprisoned former dictator, Alberto Fujimori. Keiko Fujimori refused to concede the election and began a bitter power struggle between Congress, which was dominated by her political party, and the president PPK.

Congress succeeded in forcing PPK to step down in 2017 amid accusations of corruption and his vice-president, Vizcarra, took over the presidency.

Vizcarra took advantage of widespread anger over the corruption of Congress to win over the Peruvian public. His government began working on an electoral reform which would prohibit candidates with open judicial or criminal cases from running for Congress. There was a constant power struggle between Congress and Vizcarra which led to the closure of Congress by Vizcarra in September 2019. New elections were called and a new Congress was elected.

Unfortunately, the new Congress was as corrupt as the previous one, with 68 of the 130 representatives facing some type of criminal charge from corruption to murder. This new Congress did not want to lose its immunity and also struggled with the Vizcarra government. The government also fought for an educational reform that would increase the regulations of private universities. Some members of Congress are involved in the creation and administration of these under-regulated private schools and would lose money under educational reform. Fearing they would lose profits and face punishment for their crimes, Congress worked to remove Vizcarra. They lacked enough votes in September, but won on November 9 with 87 of the 130 members of Congress.

While these politicians have been fighting over money and power, the Peruvian working class and poor are suffering one of the worst crises in decades. Like the rest of the world, Peru was hit hard by the coronavirus, making headlines for having the highest covid fatality rate in the world. In response to the resulting economic recession, the only assistance has been two bonuses of $223 to the poorest families in Peru. The process to receive these bonuses was complicated, barring many from getting the help they desperately needed.

The collective anger over corruption, political instability and economic inequality has drawn protestors into the street. Made up mainly of university students and youth, the protestors are united around demands to protect democratic rights in Peru and ensure that the upcoming April 2021 elections take place.

Police brutality against protestors has been extreme. The police have used tear gas and rubber bullets to prevent large groups of protestors from gathering and to keep them from approaching the building that houses the Congress. One crucial tactic that protesters used was to decentralize the march from the center of Lima, encouraging neighborhood groups to hold their own protests, drawing police officers away from concentrating in one part of the city.

On November 14, during one of the largest protests Peru has seen in decades, local government in Lima shut off the street lights downtown, causing chaos and confusion amongst protestors. The violence instigated by police tragically caused the death of two young protestors and injured dozens more. Many Peruvians are enraged by the police response to protests and are demanding President Merino and his cabinet step down.

Wave of Revolt Against Neoliberalism

The groups of protestors have been largely spontaneously formed. The internal violence caused by the conflict between the Peruvian state and the Maoist guerrilla group Shining Path in the 1990s eliminated many of the leftist political structures in the country. This has led to widespread distrust of any politicians or social movements on the left. However, this new generation of protestors are inspired by recent anti-neoliberal uprisings across Latin America. In particular, the protests in neighboring Chile last year that resulted in the abolition of the Pinochet constitution have been an example for Peruvians. Demands for a new Peruvian constitution have begun to be seen both on social media and on signs carried by protestors. Peru’s current constitution was written during the dictatorship of Alberto Fujimori in 1993. The experience of fighting against this unjust coup may lay the foundation for an organized youth-led movement in the future.

On the morning of November 15 Manuel Merino stepped down from the presidency, forced out by the sheer force of protests over the last five days, and particularly during the night of November 14. Protests will continue throughout November 15 as Peruvians are now increasing their demands for justice for the murdered protestors and a new constitution.

It is only through an organized working-class movement that Peruvians will be able to destroy the system that only works for the rich and the corrupt. Solidarity with Peruvians fighting in the streets! Let’s fight together for a united and socialist Latin America!