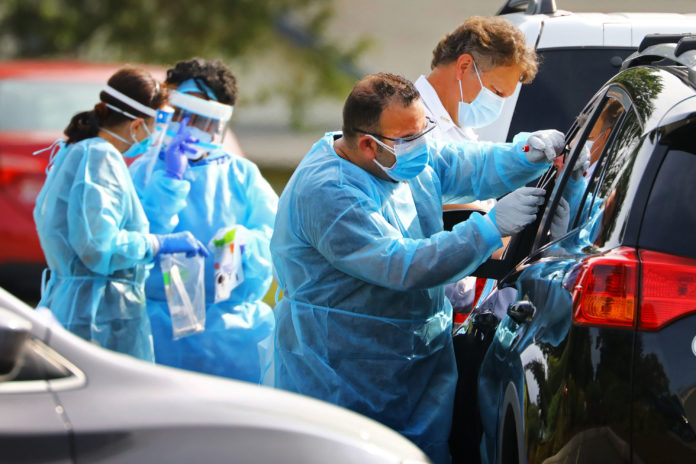 In October, the dreaded second wave of COVID-19 infections began – including the worst single week of the pandemic in the U.S.  In large parts of the country the virus is now completely out of control – most people don’t even know how they are becoming infected. Meanwhile in Europe, the second wave has forced a number of countries to impose new restrictions including complete lockdowns.

The “second wave” of the Coronavirus is focused in the Midwest and smaller urban areas. The strain on hospitals and health care resources in these areas is rapidly pushing them to the breaking point. There is a dire need to pour medical resources in to help these areas cope with the looming disaster.

For months, Democrats and Republicans on Capitol Hill have bickered over the next round of relief. As cases spiked, Congress… went on recess. Yup, the millionaires retreated to their mansions not to return to work until after the election. As cases surge across the country, the need for many cities and towns to shut down non-essential business is now concretely posed. Ordinary people understandably want to avoid this given the disastrous effects of the first lockdown. But the reason we’re in this situation in the first place is because of the failure of the capitalist health care system and the criminal incompetence of the Trump administration. Serious measures to flatten the curve need to be matched by massive assistance to working people to get through this.

Today, millions are out of work and hundreds of thousands of small businesses are facing closure. The need for a new round of stimulus is dire. Big business and the corporate politicians agree – more stimulus is needed, yet both parties stubbornly refused to make any sort of deal lest the other be able to claim it as a victory ahead of the elections.

State budgets have already been stretched to the max to cover COVID-19 costs as well as remote schooling and changes in other services. Now all states are facing budget shortfalls as they anticipate losing billions of dollars in tax revenue. State and municipal budget crises represent only one part of the potential worsening of the economic crisis. As corporate politicians of both parties refuse to tax big business, they will continue to take the budget shortfalls out of badly needed social services like education and health care. Billions have already been cut in New York, California, and elsewhere.

Working People at the Breaking Point

Unemployment numbers have declined as the economy has partially restarted. The government says the unemployment rate in September was 7.9%. However, the numbers also showed that nearly 20 million people who want to work don’t have jobs and massive layoffs have happened in the airline and hospitality sectors.

Combined with the end of the unemployment top up, the lack of jobs – particularly living wage jobs – presents a massive problem for working people who still have rent and many other bills due. Personal debt is rising. For example, during the pandemic there’s been a massive increase in the number of people paying rent with credit cards. These payments will come due and the corporations won’t allow a bailout of working people, the same way there was never a bailout for those who lost homes in 2008-9.

If the worst case scenario plays out, meaning no stimulus at all, the economy will crash. Working people won’t have the money to pay rent and bills, which will lead to empty units and unpaid mortgages which could mean a wrench in the gears of the entire financial system. Even with another stimulus, recovery will be difficult as a result of the second wave.

A new stimulus bill with relief to the states, more money for COVID-19 testing, prevention and relief, as well as an unemployment top up and other stimulus measures are needed to stave off the worst effects of this crisis. There also needs to be a federally coordinated and resourced plan for how to massively and safely produce and distribute an eventual vaccine, focusing first on the most vulnerable communities. Given the political games played by Trump and others with the vaccine question, there needs to be full transparency and democratic oversight to give people confidence and make this as effective as possible.

Working people will need to fight tooth and nail for relief and against the austerity promised to us by both corporate parties. As struggle returns to the scene, working people need a new party, not beholden to corporate cash to represent these future struggles at the ballot box.