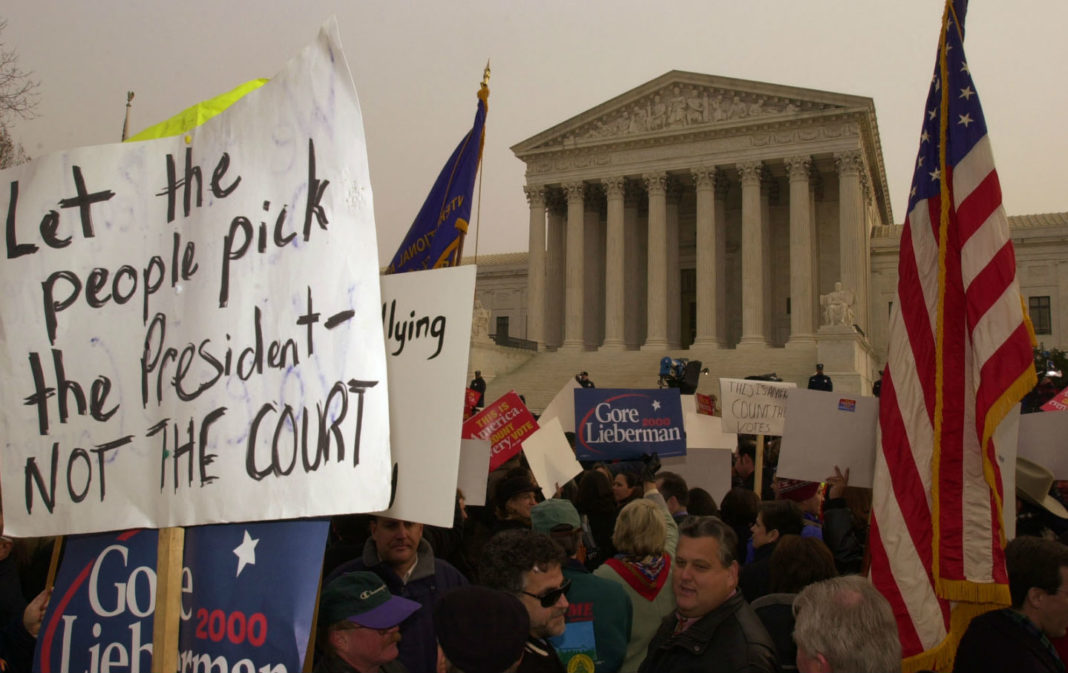 The events surrounding the 2000 election, while greatly misunderstood, still cast a huge shadow over the 2020 election. Until now, the 2000 election was known as one of the most contested in U.S. history. It was the first presidential election since 1888 where the winner of the popular vote lost the electoral college (of course this would then be repeated in 2016).  The state of Florida was the battleground where, by the morning after the election, George Bush was ahead of Al Gore by less than 2,000 votes, triggering an automatic recount which narrowed the margin to less than 350 votes. This tight margin caused frenzied legal attempts from the Gore campaign to carry out a series of recounts. A weeks-long legal battle ensued, which we detail below, and ultimately the Supreme Court decided in favor of the Bush campaign, causing Gore to concede.

The true story behind the 2000 election is that the Democrats put up a status-quo candidate against Bush, causing very tight margins, and in the face of out-and-out election theft from Republican strategists, the Democrats refused to fight. They spun a story that it was indeed the fault of Ralph Nader’s left independent campaign that Bush won, rather than their own uninspiring candidate and their unwillingness to fight.

A central narrative churned out by Democratic and liberal spokespersons is that Nader’s independent campaign was what led to the election of Bush and the defeat of Al Gore. However, this conclusion is based on a very biased view of events.

The 2000 election was fought against the backdrop of ‘new democrat’ Bill Clinton’s abandonment of New Deal politics during his presidency between 1992 and 2000. The now dominant Clinton Democratic Party was determined to emphasize to big business their support of neoliberal policies in the face of a sharp backlash by workers and young people.

The Clinton administration brazenly implemented these neoliberal policies despite opposition from labor and social organizations. They included: pushing through the North American Free Trade Agreement (NAFTA) without safeguards demanded by the labor and environmental movements, setting up the World Trade Organization (WTO) to implement NAFTA, pushing through mass incarceration with the ‘94 Crime Bill, and eroding welfare.

These were all direct attacks on labor, civil rights, women’s, and environmental movements. Mass protests erupted through the anti-globalization movement. Anger in unions resulted in the creation of the short-lived Labor Party in 1996 and the growth of the Green Party. Finally, Seattle erupted in the anti-WTO movement in 1999 where a mass campaign shut down the WTO. These movements were channeled into the insurgent, independent Nader presidential campaign of 2000.

It’s hard to describe the energy and enthusiasm for this independent Nader campaign to those who were not there. People surged into the campaign, spending $10 to attend mass rallies of 10,000’s across the country for a fresh start in politics. In the summer of 2000, Nader began polling around 10% in some parts of the country. Socialist Alternative joined and helped build this campaign. Nader tapped into a ferment within the labor movement and received some important union endorsements. This included dozens of union locals including AFSCME Local 1108 in Los Angeles, the Seattle locals of the Postal Workers and Teamsters, and the California Nurses Association.

The Democratic Party refused to change its neoliberal policies even in the face of this insurgent threat. They put forward Vice President Al Gore as their candidate in a continuation of Bill Clinton’s neoliberal policies. For most of the summer, the Gore campaign tried to ignore growing support for Nader. Two weeks before Election Day, the Democratic Party spent millions on anti-Nader messages on all media platforms, involving high-profile tours by liberal spokespersons like Gloria Steinem and Melissa Etheridge to cut across Nader’s support. Its effect was to cut Nader’s vote in half, while also demobilizing millions of young people who supported his radical program.

On election day, the result was too close to call, and would be determined by a recount of votes in Florida. After a recount of machine votes, George W. Bush was only 327 votes ahead. This tight margin caused the Gore campaign to demand a hand recount in four counties. It was this move by the Gore campaign that triggered a reaction from Republican strategists. In the days that followed they organized right-wing “rent-a-mobs” to disrupt the recount on the grounds that it was “fraudulent.”

One of these Republican rent-a-mobs stormed the Democratic stronghold Miami-Dade county where official election canvassers were recounting ballots, with Republican staffers throwing chairs and tables. This scene has been historically remembered as the “Brooks’ Brothers Riot.” The result was a halt to the vote recount.

Labor activist Jane McAlevey who was on the ground in Florida organizing for a protest recounts that in her first days in West Palm Beach, she worked on collecting affidavits from Floridians, mostly retirees who believed their votes had not been correctly tallied. There were huge numbers of them, and they were furious. McAlevey asked her superiors, “So when can we actually mobilize them, put these wonderful, angry senior citizens into the streets and on camera?” It never happened. Instead, her union leaders told her that: “The Gore campaign has made the decision that this is not the image they want. They don’t want to protest. They don’t want to rock the boat. They don’t want to seem like they don’t have faith in the legal system.”

Since courts in Florida as well as the Supreme Court were under the control of Republicans, it was a foregone conclusion that they would rule in favor of the Republicans. If the Democrats were to win, it would only happen through struggle. It was clear that the left could out organize the right in the streets and in public opinion. The Democratic Party refused. In the end, the Supreme Court stopped the recount as it was trending towards Gore, essentially giving the Republicans the White House in a “cold coup.”

These events go to the heart of the Democratic party. As a corporate party, it was determined to demonstrate its shift to neoliberalism, and that its politics would not be affected by social movements and the labor movement. That included accepting losing an election.

The Democrats did not even use all their legal means to challenge the election. As documented in Michael Moore’s documentary Fahrenheit 9/11, a joint session of the House of Representatives and Senate is needed to certify the election result. It only needed a signed letter from one Senator to support objections brought to floor by mainly Black members of the House of Representatives to open an enquiry into the result. No Democratic senator did.

Instead, the Democratic Party went on the offensive against Nader, blaming him for electing Bush. This achieved two aims. It diverted attention from their own attacks on social movements and weakened the growth of an independent political campaign that could challenge them.

The evidence does not back up the Democrats’ accusations against Nader. Gore had won the popular vote in 2000 nationally and almost certainly in Florida as well and was only prevented from winning by the undemocratic electoral college, the Supreme Court, and politics of the Democratic Party establishment.  On the issue of Florida, the 97,488 votes Nader received are dwarfed by the 308,000 registered Democrats in Florida who voted for Bush.  In other words, it was dissatisfaction with the Democrats that was the dominant issue in the 2000 election.

The vote was marred by systematic voter suppression, particularly in Florida. In the 2000 election the direct suppression of thousands of voters, primarily in the Black community, were illegally blocked from voting because their name happened to match that of a convicted felon. The Democratic party refused to challenge this.

Instead of 2000 being the start of a new left independent political movement, the completely short-sighted role of liberal and many left commentators was to repeat the mantra that Nader cost Gore the 2000 election. The thinking of these individuals was dominated by their deeply held view that the Democrats are the only possible force to defeat the right and must be protected at all costs from the growth of an energetic left movement. This drastic mistake was confirmed by large numbers of Democrats — like Joe Biden himself — voting for Bush’s reactionary policies especially the Iraq War.

Today, we see history repeated in the Democratic Party leadership’s refusal to build mass protests against Trump’s inhumane policies against incarcerated immigrant families, attacks on the environment and now Trump’s threat to steal the 2020 election. Not to mention their blocking Bernie Sanders to be their nominee. That is why Socialist Alternative is organizing to build for mass struggles in the streets if Trump threatens to steal this election. We certainly can’t rely on the Democrats! That’s why we will raise even higher our call for building a new working-class party.