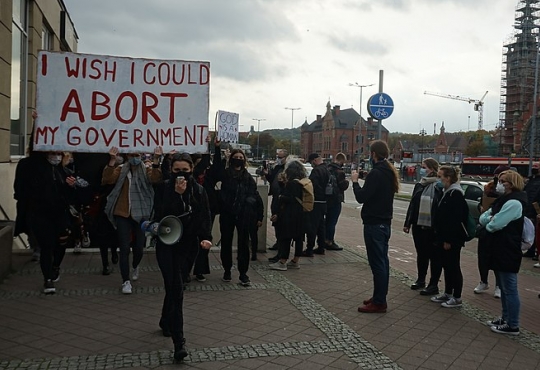 Following last Thursday’s ruling of the Constitutional Court that abortion in the case of fetal defects is unconstitutional, protests and mass demonstrations have swept the country, gaining in numbers each day. After the ruling was announced on Thursday, a spontaneous demonstration marched on the ruling Law and Justice (PiS) party headquarters in Warsaw and then on to the private home of Jarosaw Kaczyński, leader of PiS. Demonstrations and protests have continued each day since the ruling, growing in scale and sweeping across the country. On Sunday, thousands of protesters stormed the churches and faced a standoff with police in many towns. On Monday blockades in over 50 towns brought the country’s traffic to a standstill.

Currently, abortion is still legal in Poland in the case of rape, incest, or when the woman’s life or health is in danger. However, in practice the right to an abortion in these cases is usually blocked by the “conscience” of the doctor, and there are regions of the country where no hospitals will perform an abortion. The other case when abortion is legal, when the fetus is damaged, first came under attack four years ago when a parliamentary bill introducing a ban was discussed in parliament. At that time, a massive movement developed over several months, culminating in a “women’s” strike which also involved school and university students. Fearing that the movement could get out of control, PiS decided to put the draft bill banning abortion into the parliamentary “freezer”.

However, now PiS have decided to force through the ban again by cynically exploiting the fact that the new pandemic restrictions in the country prevent public gatherings of more than five people. The anger is particularly strong as this ruling, delivered by Kaczyński’s stooge Constitutional Court, comes at a time when the Covid-19 pandemic is spiraling out of control with over 16,000 new infections in Poland each day. But if PiS thought they could introduce this ban with the minimum of fuss they have seriously underestimated the depth of feeling in the country on this issue. The eruption of anger is similar to dropping a bomb into a volcano that was relatively dormant for four years. Despite the five-person limit, the sweep of the movement is much wider now, with much bigger and angrier protests than four years ago, particularly in the smaller towns.

The Youth Are Out

Like four years ago, there are a lot of young people involved — university students, but also school students. But this time the anger directed against PiS, the Catholic Church and the far right party, Konfederacja, has reached boiling point. Also, it is a much bigger, more elemental and spontaneous movement than four years ago. Although the Facebook groups that were organizing the protests 4 years ago are the same ones calling for action now, on the ground there are no organizers, no speakers, and where each demonstration goes and how long it lasts is anyone’s guess.

Four years ago the liberals around Civic Platform and KOD (Committee for the Defense of Democracy) were able to place themselves at the head of the movement and silence the more radical voices, even expelling protesters who had “vulgar” slogans on their placards or demanded abortion on demand. Left-wing political organizations were even banned from giving out leaflets on many of the protests.

In contrast, the level of anger is such that the central slogan now is “Wypierdalać!” (F**k off!). Another popular but more subtle slogan is “I wish I could abort my government”. Clearly protesters don’t want to simply reverse the ruling of the Constitutional Court — they want to get rid of the Law and Justice government and the corrupt Church hierarchy which dominates the state.

A “women’s” strike has been called for Wednesday 28 October. Alternatywa Socjalistyczna and Rosa Polska — the socialist feminist campaign — are calling on the trade unions to come out clearly against the abortion ban, actively support Wednesday’s strike and prepare to build for a one-day general strike on this issue in the future. We are also calling on all school students and university students to abandon their remote classes on Wednesday, demonstrate their opposition and get organized. We urge students and school students to create democratic committees of struggle based around their classes, schools and colleges.

We are not only fighting against the current attack on abortion rights. We demand a woman’s right to choose in all situations — abortion on demand, no questions asked, free of charge and free and easy access to contraception. The influence of religious fundamentalists should be removed from the state, the health service and the schools.

We demand a massive increase in the health budget to fight the COVID-19 pandemic and to improve women’s reproductive rights. For free child care. A massive increase in disabled carer’s allowance for parents of disabled children and adults. The separation of the church and the state. No religious education in the schools — replace it with sex education taught by well-trained specialist educators. Finally, this religious fundamentalist right-wing government must be removed — abort the PiS government and the system they represent. But we must not stop there but for women to really have a choice, we need to improve the social conditions that constrain us, and that requires socialist change.