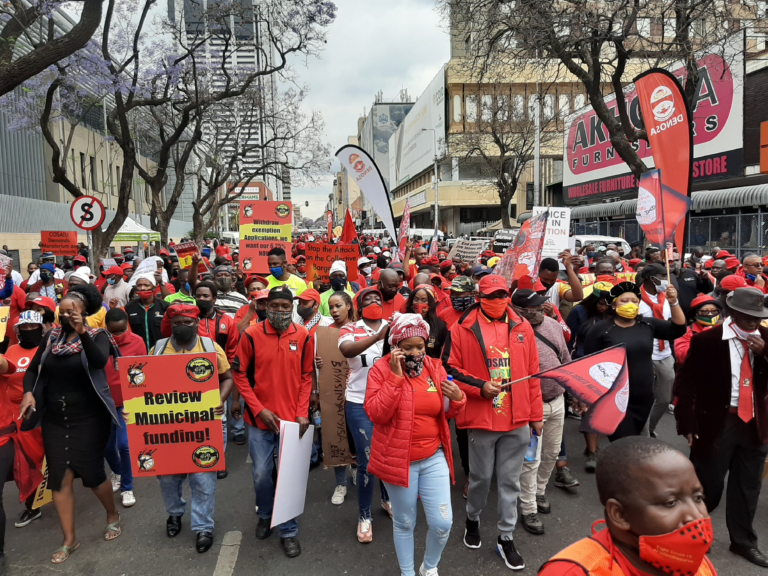 Awakening a giant: the mighty working class is on the march

Workers from all major union federations turned up in the thousands for the October 7 #CosatuNationalStrike. SAFTU, NACTU and FEDUSA called on their members to support this action, marking an end to the long paralysis in the labor movement and a historic moment of working class solidarity not seen since the fall of Apartheid.

Slogans on placards demanding jobs and against the privatization of State Owned Enterprises (SOEs) like ESKOM and PRASA, with chants calling for the end to corruption and the scourge of Gender Based Violence were seen and heard across the country. Union federations are calling on the state to implement the agreed wage increases in the public sector.

Marching to the Treasury in Pretoria, hundreds of COSATU members were joined by a small contingent from SAFTU. It was notable that issues facing working class women, such as workplace harassment and abuse, as well as Gender-Based Violence, formed one of the main themes of this march.

In Cape Town the mobilizing efforts of GIWUSA could not go unnoticed, bringing out the largest portion of the SAFTU workers present at the rally with militant women leading the charge. As SAFTU picketed opposite Parliament, the COSATU motorcade came through with hooting and cheering “Viva SAFTU, Viva COSATU” drowning any other noise. COSATU members in cars and minibus taxis quickly jumped out and joined the SAFTU picket. Together everyone danced, chanted, and sang before marching to the Western Cape Legislature to deliver their demands.

When asked what they were protesting, a NEHAWU worker responded: “Everything. We are facing so many attacks and we must start fighting back.” Another member added that “workers cannot continue being in the same union as the bosses”, referring to the Tripartite Alliance between COSATU, ANC and SACP.

In Johannesburg, COSATU marchers chanted “Viva SAFTU” urging the picketers to join them. Eventually everyone came together in a mass rally. COSATU members told our WASP cadre that the unity of the working class is essential in the current struggle against the system. The sea of red brought together the frontline workers, such as nurses in YNITU and DENOSA, public sector workers in NEHAWU SADTU and NUPSAW, as well as a significant presence from THORN and NUMSA rank and file.

Mametlwe Sebei from WASP addressed the crowd in Johannesburg, emphasizing that “the significance of this day not only lie[s] in the fact that workers in their thousands are out of work in demonstration — a fact of importance on and by itself — but this day will go into the annals of history as one of those rare moments in history when the working class stood together against capitalism and the austerity programs… The last time workers across federations were united was before 1994; not since the dawn of democracy have we ever had a strike endorsed by all major federations in this country.”

Organized workers were joined by unaffiliated and unemployed workers who either took part in the strike action or joined the rally during their breaks, in spite of the lies peddled by bosses that the strike was not protected. Leftist, climate change and community organizations also joined in solidarity on the day, including C19 People’s Coalition, Eastern Cape Water Caucus, and Extinction Rebellion to name a few.

It is clear that in spite of the delusions of some of the leadership in the labor movement and broader left, the workers know that there is only one working class, and that solidarity along class lines overcomes any other divisions. The union leaderships should take note of the participation in spite of COVID19 concerns and generally poor mobilization efforts. The working class turned up in thousands across the country — in every province — providing the kindling of a potential revolutionary fire.

It was WASP members in the trade unions who pushed for a motion to get SAFTU to endorse the COSATU General Strike and call on all other Federations to do likewise. We also insisted on the adoption of a clear program of rolling mass actions going forward. We are proud of this achievement and will continue to campaign for an active program for a fight back against the capitalist onslaught and for a strategy to rebuild the workers movement into a fighting force for socialism. Unlike those who enjoy shouting at the workers movement from the wilderness, WASP firmly believes that there is no genuine socialism outside the workers movement, because as Marx pointed, the emancipation of the working class is the act of the working class itself and nobody else. It is this which distinguishes us from the rest of the Left.

What this historic action shows is the Left as a whole cannot afford to wait — the working class is clearly moving into struggle with or without them. To critique the movement from the sidelines and actively obstruct it by refusing to stand in solidarity with the masses will prove to be a disastrous mistake. While this action offers a glimpse into what is possible, it was only a first step in lifting the paralysis of the workers movement. The declaration of solidarity from trade union federations and working class organizations is critical towards building the working class solidarity needed to overthrow this sick capitalist system.

WASP calls on all working class formations to build on this momentum and mobilize for the coming campaign of mass actions proposed by both COSATU and SAFTU. We need a Joint Shopsteward Council of workers from across all federations and independent unions, as well as a Working Class Assembly inclusive of activists from community, youth, gender and climate change movements to discuss the next steps in the mass rolling actions and perspectives and program for the whole movement in the current period.

We must seize this opportunity to fight not only against attacks from the capitalist class, but also to move forward and demand the nationalization of banks, commercial farms, mines, big factories and big businesses under democratic working class control. This fighting movement must aim to build a mass workers party on a socialist program as a real alternative to the current parties that unashamedly represent the bosses’ class.