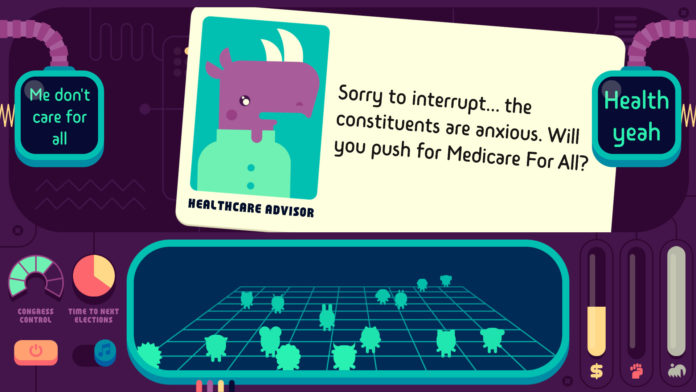 As global capitalism is thrown into ever-deeper crisis, it’s only natural that our entertainment will reflect this situation. The video game industry has been resistant to this process, producing Reaganite propaganda like the upcoming Call of Duty Black Ops: Cold War, and trying to pass it off as apolitical. But the indie scene, through games like Disco Elysium and Tonight We Riot have shown that video games can be used as a vehicle for leftist politics. Democratic Socialism Simulator, the latest entry from the Italian “culture jamming” group Molleindustria, continues this trend, using a Reigns-inspired simulation game to explore “the opportunities and challenges of a Sanders (or Sanders-like) presidency.”

In Democratic Socialism Simulator, you play as the first socialist to be elected president of the United States. The game’s promotional material promises that you can “Enact radical reforms, tax the rich, transform the economy, tackle the most pressing issues without alienating voters or bankrupting the government. But beware: the ruling class won’t give up its power easily. Even your closest allies may turn on you.”

In the game, various advisers present you with a series of policy proposals that you can accept or reject using the “swipe right” and “swipe left” mechanic from the dating app Tinder. The policies are all taken from discussions in the modern socialist movement: from Medicare for All and cancelling student debt to seizing the means of production. These decisions adjust meters indicating your budget, carbon emissions, and “people power,” as well as your overall popularity among different sections of the electorate. Your goal is to maximize “people power” and minimize carbon emissions, while successfully carrying out two full terms in office.

The game has a fun, cutesy aesthetic, with a cast of anthropomorphic animals reminiscent of Night in the Woods, and a soundtrack by Jesse Stiles combining synth pop and old labor hymns. It has a breezy runtime of 20 to 30 minutes per session, providing ample opportunity for multiple playthroughs where you can try different playstyles: from an uncompromising socialist stalwart to a complete sell-out. But its most fun aspect is the way its political statements spit in the face of conventional simulation game tropes.

The Politics of Simulation

The simulation genre of video games to which Democratic Socialism Simulator belongs is known for open-ended sandbox games. The player is given a set of systems that model a city (SimCity), a civilization (Sid Meier’s Civilization) or someone’s life (The Sims). They can use these systems to reflect whatever values they want, but the underlying systems are presented as politically neutral representations of reality.

But no simulation will ever be a direct replication of reality, and the systems driving simulation games reflect their own political biases. In a talk in 2017, a Molleindustria developer discussed the hidden neoliberal and technocratic biases in city simulation games like the SimCity series. He pointed out that, in that series “Class stratification is simply a constant beyond the player’s agency.” Because of this, crime is represented as its own system, detached from class, and it’s always solved by building more police stations. Meanwhile, once you raise taxes past a certain threshold, “citizens will simply leave regardless of the services you provide.”

Democratic Socialism Simulator, on the other hand, wears its politics on its sleeve. The developers are clear that their game is “by no means a serious simulation, but is based on extensive research on viable policies, and on the history of social-democracies.” If you object to this, the game’s tutorial kindly informs you: “Well, if you are interested in status quo simulators you might want to play literally any other game instead.”

While a game like SimCity limits your taxation options to raising taxes (for everybody) or lowering them (for everybody), Democratic Socialism Simulator lets you try out different tax policies targeted for the rich. You’re given a choice to accept or reject different policies, but the game lets you know what it thinks about those decisions. So, when you’re given the choice to raise taxes on corporations the choices aren’t worded as “yes” and “no,” but “Yes, invest in workers” and “CEOs work long hours.”

The funniest part of the game is a recurring gag with the defense advisor, an anthropomorphic eagle in a military uniform. He perpetually tries to sneak in budget items without telling what they are. It inevitably turns out to be some rotten program sucking up taxpayer money to fund spies, torturers, and weapons. Each time this happens, you have to force the defense advisor to come clean about what the budget item is for before you’re given the opportunity to reject it. In addition to the humor, this offers some insight on how the capitalist state props up militarism, and how badly it reacts to attempts of left-wing politicians to change things. While we don’t have a socialist president, we do have socialists like Kshama Sawant elected on the local level, who have faced similar pushback in attempts to defund the police.

While Democratic Socialism Simulator gives players the opportunity to challenge the capitalist norms that other simulation games take for granted, doing so provokes backlash from the ruling class. The capitalist media (represented by Fox News and the New Pork Times, run by an anthropomorphic fox and pig respectively) will make sensationalist distortions of your policies and manufacture scandals in efforts to turn the public against you. Moderate politicians ostensibly on your side can defect. And, in some endings, you can even be overthrown in a military coup.

Even as the game parades in cartoonish unrealism, it ends up being a lot more honest about what socialists can, and can’t, accomplish under the capitalist state than other games of its type.

The Limits of Reform

While Democratic Socialism Simulator challenges many of the base assumptions of other simulation games, it still has its limits. Some of this is inherent in the natural limitations of representing anything as a game. Making a series of individual yes-or-no decisions on policy measures is far from reflecting any sort of genuine workers’ democracy, something the game itself acknowledges when its tutorial declares: “Yes, a single player democracy is a contradiction in terms.”

But other assumptions made in the game raise questions about the ideology of the game-makers. The game still limits you to working within the framework of a parliamentary road to socialism. You’re given the option to support strikes if they break out. But you can’t use your platform to call for strikes and demonstrations, or even to build solidarity campaigns to strengthen them. This prevents players from even attempting to adopt the approach adopted by revolutionary Marxists who make use of the bourgeois electoral system, as Socialist Alternative has done, for instance, with Kshama Sawant.

The game similarly takes for granted that a democratic socialist president would come to power within the Democratic Party. Your ability to pass progressive legislation is determined by the balance between Democrats and Republicans in Congress. You can support left-wing primary challengers, but the idea of building a new, working-class party doesn’t figure into the game’s mechanics. Corporate Democrats can betray you by defecting to the Republicans. But the game doesn’t depict anything analogous to the open sabotage carried out by the Democratic Party establishment against the Sanders campaign.

The game does portray ruling class resistance to socialist politics. But, within the game’s mechanics, it’s the masses themselves that act as the biggest break on progress. The ruling-class sabotage mostly takes the form of media attacks that drive the voters away from you. The voting base is presented as a collection of game-objects with a pre-programmed set of values, who will be driven towards, or away from you, depending on how various developments align with those values. Even the military coup ending only occurs if you’ve already alienated the masses.

Democratic Socialism Simulator came out during the highpoint of Bernie Sanders’ 2020 presidential campaign. And the game’s politics reflect both the strengths and weaknesses of the activist layer around that campaign. At that time, Jacobin magazine (represented in the game as Jackalin and run by an anthropomorphic jackal), significantly downplayed the institutional pressure on the Sanders movement, declaring “It’s Bernie’s Party Now.” But after Sanders was defeated, Jacobin switched to a completely pessimistic approach, lamenting that “Bernie’s army never showed up” and blaming the masses for his defeat. Democratic Socialism Simulator has similar contradictory takes on the limits of reform: optimistically downplaying the resistance of capitalist institutions, while pessimistically downplaying the revolutionary potential of the working class.