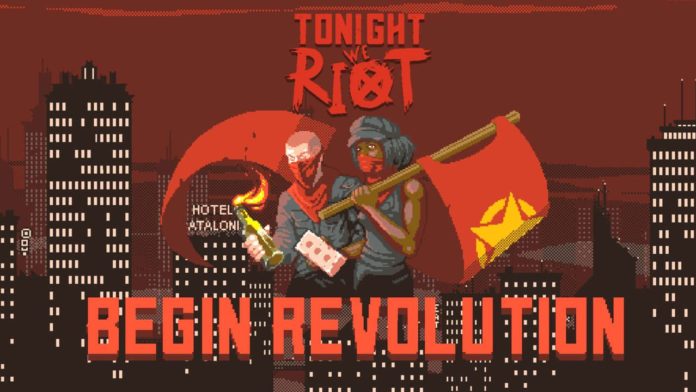 “The world is in the throes of global capitalism. Workers everywhere toil daily for a pittance. Many work multiple jobs just to make ends meet. But no matter how hard they work, it’ll never be enough to be free. For those who do not own the means of production will never know real freedom.”

Those are the opening words of Tonight We Riot, a new game from the worker-owned video game co-operative Pixel Pushers Union 512, now available on PC and the Nintendo Switch. With Tonight We Riot, the workers at Pixel Pushers Union 512 sought out to make an “unapologetically leftist” game. Combining the style of retro, side-scrolling beat-’em-ups with Pikmin-inspired crowd mechanics, the game lets you make a socialist revolution.

Shawn Tarver of Socialist Alternative sat down with Ted Anderson, one of the developers of Tonight We Riot, to discuss how it came to be, and political inspiration behind, along with the state of the videogame industry. Here’s what he had to say.

Shawn: Where did the idea come from? What made you want to make Tonight We Riot? Did something, in particular, inspire you?

Ted: The idea came from a disappointment with the way that Leftist ideas were handled in games and various other media. Whenever there’s a rebellion, or an uprising, or what-have-you, it’s always ideologically blank. It’s neutral. Everything from Hunger Games, to Game of Thrones, to Bioshock Infinite walks up to the line of realizing the violence inherent in a state/capitalist partnership and then sorta walks it back. It never crosses the line or speaks specifically to who holds the power, and why – or it tries to suggest that both sides are bad and that a rebellion is definitely prone towards becoming a cruel dictatorship.

So when we went into making Tonight We Riot we decided to make a game that was joyful in its rebellion, and cast its heroes as all members of the working class and specifically pointed out capitalism and capitalists as the villains. We wanted to connect both the notion of the “state” and those in control of wealth as being in cahoots towards viciously guarding that inequality at the barrel of a gun.

Shawn: In the current climate, even something as basic as having a female protagonist or allowing same-sex romance options in a game will result in a torrent of abuse against “shoving politics down our throats.” Are you worried about similar denunciations?

Ted: Not really. I feel like there’s a reactionary element out there and they’re always spoiling for a fight with what they see as inroads into their unspoiled “neutral” reality. It’s not actually neutral, but they see it that way. So when women or LGBTQA folks get represented in a game, they blow their tops! It’s upsetting that “neutrality” and now – to them – it’s lopsided against them. Any form of critical thinking would show otherwise, but our media, culture, and societal influences intentionally dissuade folks from that kind of introspection.

That being said, as an explicitly Leftist game, I feel like a lot of that reactionary crowd took a look, realized exactly what it was, and decided that we weren’t a “threat” to that “neutrality” because – like other Leftist media and literature – we were outside it.

Shawn: Pixel Pushers Union 512 is a worker-owned co-operative. How can such formations, as well as the unionization efforts at private studios, change video games for the better?

Ted: The same old cry for hundreds of years: Wages, hours, and conditions.

It’d be amazing to have worker representation at the table when a AAA studio is scoping a project or setting a release date. To have a concentrated voice to push back against crunch, or to secure royalties from the games that workers made? Fantastic.

In a worker-owned cooperative we all get an equal share of the games that we work on. We also get a vote on major decisions within the studio. We started off pretty granular with this, but eventually found that it was best to leave production level decisions to their departments – trust your fellow workers, after all! – and to leave the big decisions (travel, conventions, publisher deals, etc) to a vote.

Shawn: How did the current state of the video game industry affect the time it took to develop Tonight We Riot?

Ted: It really didn’t, I guess. The major factor behind the length of time “Tonight We Riot” took to develop was the matter of us building it on nights and weekends – a hobby-scale production effort.

Shawn: How did your desire to make an explicitly leftist video game shape the actual gameplay mechanics?

Ted: This is something we’re quite proud of. From the initial opener of the game, the player is shown how they, themselves, are different from those who own for a living. Then we plonk them into the world and they are shown that the enemies will always attack first and that there is no explicit “leader” for the player to play as, but rather a random rotation of workers who are in charge of moving the revolution forward. You can kill a person, but you can’t kill an idea, after all.

Shawn: Do you see a need for more leftist video games? Would games like yours serve as an educational tool to better teach and inform people of leftist history?

Ted: Absolutely! The grand response to our game has shown us that there is absolutely a market for leftist gamers out there and that making them honestly and earnestly as leftists ourselves we can create a dual system that we ourselves control. We will seize those means and make them our own and tell our stories and educate folks at the same time.

By spreading leftist information through fun, interesting, and explicitly leftist games we can help bolster a culture in a market that has – for too long – been the playground of the military-industrial complex, the wealthy, and so forth. We need more leftist games and media!