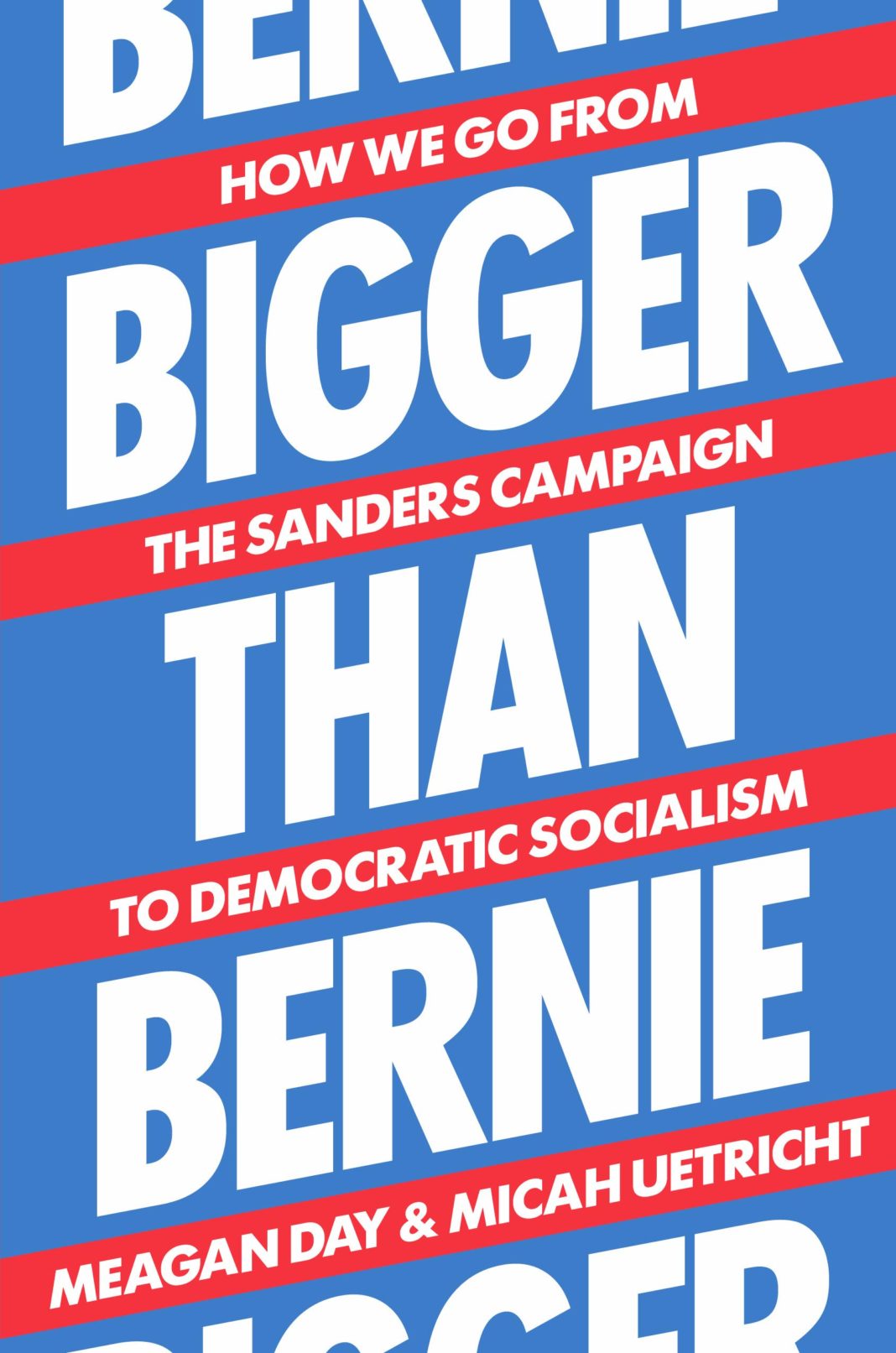 Bernie Sanders’ 2020 campaign inspired millions of Americans and brought tens of thousands into an organized campaign to fight for Medicare for All, free college tuition, a Green New Deal, and other bold demands. This was a movement aimed at defeating Trump, but also at defeating the establishment in both parties who remain bitterly opposed to the “political revolution” Bernie stood for.

Meagan Day and Micah Uetricht – prominent members of the Democratic Socialists of America (DSA) – dove into Bernie’s campaign head first and were inspired to develop a vision of creating change and popularizing socialism based on the electoral success of Bernie and others. Their book Bigger Than Bernie: How We Go from the Sanders Campaign to Democratic Socialism was published in March 2020 just before the major Democratic Party candidates lined up in a coordinated effort to deny Bernie a chance at the nomination.

Bernie then dropped out and endorsed Joe Biden, which was a major blow to the movement he built. Millions feel the loss of a leading figure who could have used the electoral race to develop a popular program to combat the COVID-19 pandemic or fight police brutality. Bernie’s campaign served as the main pole of attraction for people who wanted to fight for serious change in society. Now, after his capitulation, much of that energy has turned to workplace organizing around the pandemic and street action in response to George Floyd’s murder by the police.

In spite of this changed situation, Bigger Than Bernie offers insights on Bernie’s campaign and other left campaigns that will be valuable when electoral politics once again takes center stage, and is especially useful reading for activists who want to understand an important view in one of the most important debates in the socialist movement today.

Day and Uetricht represent an important trend in the socialist movement in the U.S., many of whom are organized around the Bread and Roses caucus of the Democratic Socialists of America. This trend sees that socialists – inspired by Bernie – can have a wide impact in society and can find ways to reach millions of people with socialist politics, particularly by using elections. They say, “Small groups of self-organized socialists and emboldened workers can play a very important role… but without millions in our corner, we’re no match for the United States’ political machinery.”

The authors argue to use electoral politics to reach a wide layer of working-class people, and advocate for a specific model they call “class struggle elections.” According to Day and Uetricht, “class struggle candidates” use their electoral campaigns to “popularize socialist ideas, clarify class lines, energize people to fight on their own, and build movements beyond elections.”

We welcome the popularity of these ideas. It’s clear that many active socialists today have learned from the weaknesses of past “progressive” political campaigns, and aim to develop a principled socialist approach to elections. A long history of betrayal by elected officials has pushed a section of the left away from electoral politics altogether, but we agree with the authors that elections are an important tool for reaching hundreds of thousands or millions of working and oppressed people with socialist politics. Socialist candidates should not see themselves as career politicians who try their best within the system to legislate in a progressive way, but should act as an instrument of the movement, whose job is to use their platform to raise the expectations, fighting spirit, and organization of our class.

Working Class is the Driver of Change

Day and Uetricht explain that the working class has the potential to change society, “They are the ones who can stop working all together in order to hold profits hostage and demand concessions from the capitalist class.” We agree about the tremendous power of working people, and we would go further: the working class is also the only social force whose conditions of life and work prepare it for collectively running society based on cooperation and planning, rather than competition and profit-seeking.

Does the power to transform society lie with workers’ representatives in elected office or with working-class movements outside the official halls of power? While elected officials have a broad platform to advance socialist ideas, the formal power they hold amounts to little without a movement fighting for those ideas. Working-class power mainly comes from our ability to disrupt the economy because of our crucial role in it, and ultimately from the potential we have as workers to reorganize the economy along socialist lines.

Bernie used his campaign machine not simply to canvass voters, but also to drive turnout to picket lines of unions on strike and to boost social movements. All socialists running for office or in office should be doing this! At times, the authors of Bigger Than Bernie advocate for the role that election campaigns like these can play in service of the movement. With the right political approach, these campaigns can “raise the expectations of ordinary working people, unite them against a common capitalist enemy, and promote mass working-class movements outside the state.”

But at other times they seem to overestimate the role of elected office and present winning elections as half the battle to winning socialism. In the chapter “The Dirty Break,” the authors put forward an approach they call “the democratic road to socialism,” which they explain is “the idea that we need to make good use of the democratic structures and processes available to us in order to advance our cause.” They explain that capitalists will defend their system, but that “By engaging in mass democratic politics … we can tip the balance of power in favor of the working class.” And later continue: “We achieve success in the electoral sphere when we’ve won over masses of people to our political agenda. Elections can be used to build mass working-class movements, and the project of wielding state power can be used to clear the path for those movements as they confront their class enemies.”

In essence, this is a model where the working class is first a voting bloc that gives a democratic mandate to an elected socialist government, and then a social tool to be “mobilized” by the government when the capitalists try to fight back. This approach is dangerous advice for working people.

Starting from the idea that capitalist democracy is widely seen as legitimate, Day and Uetricht try to find a way to win socialism using the existing system. In Socialist Alternative, our approach is based on looking at whose interests the key institutions in society serve. We have to answer the question: will the existing system of government, which is built to maintain capitalist inequality, be a tool that working people and the oppressed can transform and wield in our own interests?

Although many people have illusions in the system today, experience is the best teacher. The reemergence of the Black Lives Matter movement following the killing of George Floyd has learned from the ineffectiveness of the small piecemeal reforms that were accepted in 2014-2015. Through struggles, the working class will learn that the state machine is too deeply tied to the capitalist class, and it cannot serve our needs. At a certain stage, out of self defense and necessity, the working class will create its own bodies in the workplaces and communities to run production, organize distribution of resources and public safety. These democratic committees arising out of mass struggle will be the basis of a new form of government in which millions of people are involved in democratic decisions of how their neighborhoods and workplaces are run.

Day and Uetricht acknowledge that the Democratic Party is overwhelmingly controlled by the capitalist class. They support and promote DSA’s formal position of the need for a new party for working people. We agree with these two sentiments but differ in what actions to take. Socialist Alternative campaigns to bring the forces of the left together – including Bernie Sanders supporters, left unions, the DSA, and elected socialists such as Kshama Sawant in Seattle and Alexandria Ocasio-Cortez in New York – to form a viable independent party for the working class. We argue that the basis for such a party exists today and we are campaigning for the beginning steps to be taken.

For Day and Uetricht, all left approaches to the Democratic Party fall into one of three categories: realignment (or reforming the Democrats), clean break, and dirty break. They correctly reject the “realignment” strategy as virtually impossible. They also oppose a “clean break,” which they narrowly describe as immediately building a new party in isolation from the broader movement. They argue that what’s needed is a “dirty break,” where we prepare the forces to break away at some point in the future, but mainly run our electoral candidates on the Democratic ballot line for now. In effect, this means putting off to some future situation the task of actually building a new party.

Reality does not fit neatly into these three categories. As part of running electoral campaigns that clarify class lines, we believe that organizations on the left should run campaigns as independent socialists, not as Democrats. We reject that this necessarily means isolating this work from the broader movement. Socialist Alternative continues to work with people in the Democratic Party while pointing out the need for a new party. What’s needed is a clear campaign for a new party combined with tactical flexibility on how to engage rank and file Democratic voters and activists.

To develop a balanced strategy on how to break from the Democratic Party, we should take a close look at all of the important attempts to run left campaigns, both within and independent of the Democrats. The Kshama Sawant campaigns of 2013, 2015, and 2019, as well as the work of her council office, are highly relevant.

With its heavy emphasis on the role of elections in winning power, the book is already beginning to feel dated. This is a consequence of the rapidly changing political situation in the midst of the global pandemic and recession, but it also raises questions about the authors’ approach. Can we use these ideas to develop a strategy for this new political landscape?

We are facing an economic crisis that could rival the Great Depression of a hundred years ago, which may temporarily put the worker’s movement on the defensive. But these conditions also set the stage for even bigger struggles than we’ve seen in the past few years, and the movement is sure to grow and learn rapidly. Working people will demand more from their socialist representatives in office. Abstract questions about the capitalist state will become concrete. In this historic period, where even mild reforms are totally unacceptable to a ruling class desperate for profitable investments, revolutionary politics will begin to play a central role.