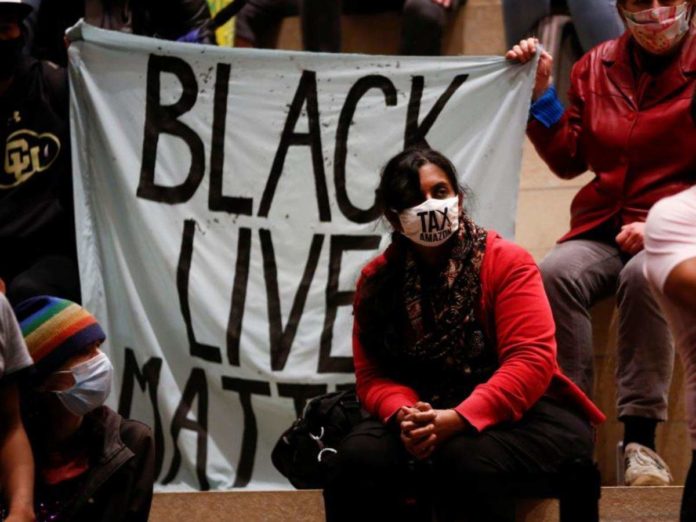 Kshama’s office has played a crucial role in groundbreaking working-class movements that have won major victories against the city’s most powerful big business interests, most notably the 15 Now movement which made Seattle the first major US city to adopt a $15 minimum wage and the recent Tax Amazon movement which won a $240 million per year tax on the city’s top 3% largest corporations to fund affordable housing and public services.

Kshama and her office also fought unambiguously alongside Seattle’s recent Black Lives Matter protest movement, both on the streets and in City Hall by introducing legislation to ban the use of crowd control weapons against peaceful protesters – which passed the council only to be challenged in court – and to defund Seattle police by 50% – which was rejected by all eight other Councilmembers.

While the recall petition was officially filed by an individual resident of Kshama’s district, the language in it is notably all but identical to a public statement from Seattle Mayor Jenny Durkan calling for the City Council to expel Kshama.

More evidence that a section of the political establishment and big business are behind the recall campaign quickly surfaced after the petition was filed. As reported by The Stranger, Egan Orion, the Amazon-backed candidate who ran unsuccessfully against Kshama in 2019, is backing the campaign. Representing the far-right is Trump-donor and billionaire ICE landlord Martin Selig, who has also emerged to back the campaign, reportedly privately offeringing unlimited funding to support the effort to unseat Kshama. The recall campaign has hired a top-dollar bigtime establishment lawyer to represent them in court: former US Attorney under George W Bush and former Republican John McKay, who reportedly also happens to be a personal friend of Mayor Durkan.

The recall has raised over $50,000 in anonymous donations so far – likely kept anonymous to hide its right-wing and corporate donors. But as the campaign heats up, as in Kshama’s 2019 election campaign, we have every reason to expect corporate PAC money to emerge so that billionaire backers like Selig can try to buy the election.

The recall effort against Sawant is happening in the context of a nationwide reaction from the right-wing and political establishment against BLM protesters and progressive movements in general. The strength of the recent global BLM uprising and increasing frequency of strikes by essential workers have enraged and frightened the ruling class, who will do whatever it takes to defend their profits and system at the expense of working people.

Contrary to the cynical claim heard everywhere during the pandemic that “we’re all in this together”, the Democratic and Republican parties are working together with big business to force the costs of this pandemic and economic crisis onto the backs of working people through vicious austerity at every level of government.  As always, the working class, and particularly Black and Brown people, will bear the brunt of these attacks as well as continued police violence.

The political establishment and big business can’t accept the democratic choice of working people who have now elected Kshama three times, most recently last year in which they went all out and spent unprecedented sums of money trying to unseat her.

This recall effort is above all an attempt to overturn the historic gains working people have won in Seattle through movements built by Kshama and Socialist Alternative: the Amazon Tax, the $15/hr minimum wage, landmark renters rights laws, and other victories.

In fact, three of the four articles of recall approved by the judge directly take issue with the leading role Kshama and her office played in social movements, including Seattle’s recent Black Lives Matter protests and Tax Amazon. Two of them accuse her of endangering people and property by participating in BLM protests at City Hall and in the neighborhood of Seattle Mayor Jenny Durkan’s home. A third accuses her of illegally using public resources to support the Tax Amazon ballot initiative, despite no ballot initiative having been filed by the movement until months after the expenditures in question were made.

The fourth article takes issue with Kshama being a socialist, accusing her of delegating the authority of her office to an “outside organization”, Socialist Alternative. Not only is this an old accusation already dismissed by the Seattle Ethics and Elections commission,  it boils down to attacking Kshama simply for being principled and democratically accountable to her own grassroots organization, Socialist Alternative, and its working-class political platform. In reality this is a quality most working people wish other politicians had!

These attacks are a direct result of the success of Kshama’s office and the movements we’ve helped organize, building enough working-class power to threaten the interests of big business. Working people and socialists have no choice but to fight back.

We are launching an all-out mass campaign to defend our Council seat for working people from this right-wing recall campaign. Simultaneously, we are fighting to win immediate concrete victories on the things working people in Seattle most urgently need:

We are appealing the decision of the Seattle District Court Judge and we will fight every inch of the way to defeat the recall in court, but we recognize that the courts are on the side of the ruling class, not working people. We cannot afford to wait on the state Supreme Court decision. If this ruling is upheld, the recall campaign will need to collect 10,700 signatures in order to qualify for the ballot. This would be an extremely challenging task without serious funding, especially during a pandemic. However, given the recall campaign’s unlimited funding from the right wing and corporate elite, we should be prepared that they will be able to accomplish this.

Working people need to be prepared for a ferocious allout campaign from big business and the right wing. Not only will the recall campaign itself have unlimited funds, it will be supported by the corporate media, the Democratic establishment, and by countless big business lobbying groups, all of whom will brutally attack us without concern for accuracy or the needs of working people.

But we also have good reason to be confident going into this fight. With the leadership of Kshama’s council office and a fighting movement, the establishment was just days ago forced to back down on an attempt to reverse modest gains recently won by the Black Lives Matter movement in the city’s budget – an important victory! And in just the first week of our Kshama Solidarity Campaign, we have already raised over $40K in donations from working people.

We have begun campaigning on the ground in Kshama’s district, Seattle City Council District 3, to ensure working people understand what’s at stake and how they can get involved.

If you don’t live in Seattle, don’t worry- you can still help!