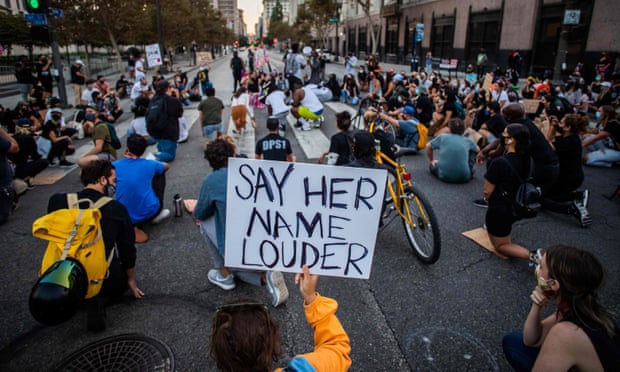 The below is the text of a leaflet Socialist Alternative members distributed at protests the night of the non-indictment in Breonna Taylor’s murder.

Under intense pressure from the political establishment, a Kentucky Grand Jury failed to charge any of the cops for the murder of Breonna Taylor. In what amounts to a slap in the face against those who spent six months fighting for #JusticeForBreonna, one of the cops will be charged for endangering her neighbors when he blindly shot 10 rounds from outside of Taylor’s apartment.

The Whole System is Guilty

Initially, the political establishment didn’t acknowledge her muder at all, even refusing to place the officers involved in her death on leave. It took relentless protests to get them to even look into her death. When they finally did, the investigation focused on discreting her, even trying  to bribe her boyfriend by offering him a plea deal in return for saying Breonna was a “criminal”.

When asked about Breonna’s murder earlier this month, Joe Biden said “I think we should let the judicial system work its way.” This couldn’t be more tone deaf. The Black Lives Matter rebellion this summer broke out precisely because of the failures of the judicial system!

Breonna’s real crime was being poor, Black, and at the wrong place at the wrong time living under the racist system of U.S. capitalism. She was murdered during a “no knock” military style raid, a common tactic of the racist “war on drugs”, which destroys the lives of millions of Black, brown and working class people.

It would be a mistake to dismiss the important victories the movement has won so far, though there is a lot that still needs to be won. The most concrete win, “Breonna’s Law”, makes no-knock raids illegal in Louisville, and should be expanded nationally. Street protests are a critical tool in our struggle, but we need sustained organization in order to carry the movement forward.