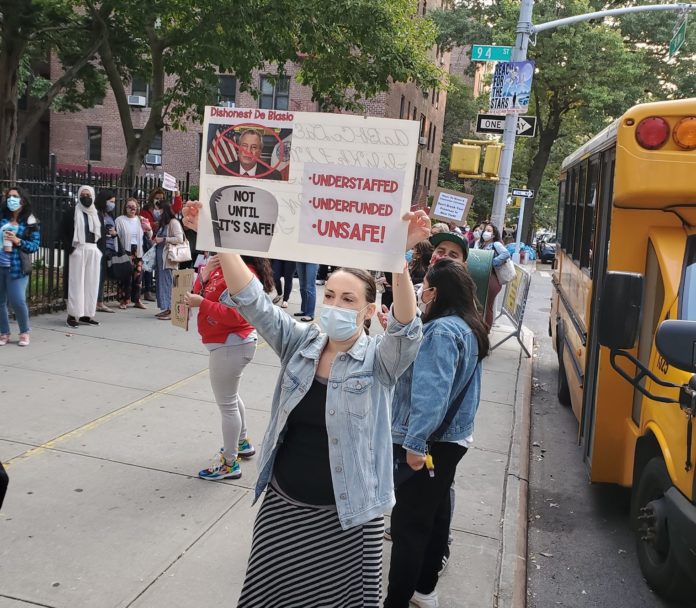 Tax the Rich and Wall Street to Provide Necessary Resources

K-12 schools are reopening across Europe and Donald Trump has demanded that they reopen across the United States regardless of the safety of students and education workers.

New York City is the only major city in the country whose public schools are reopening and even then only on a partial basis. This is for the simple reason that in almost every city, public authorities have had to concede to parents and educators who correctly do not believe that the virus is under sufficient control. In some cases, as in Chicago, teachers had to threaten strikes in order to get the authorities to see sense.

But with NYC schools set to reopen next Monday, September 21, many educators and families are increasingly alarmed about the lack of resources provided to the schools to safely reopen as well as the lack of resources to allow the “hybrid” model — teaching some students in person and others online — to work. Teachers in some schools have organized building wide sick outs and rallies outside the school.

Can Schools Be Reopened Safely?

New York, after going through the worst disaster in the country, with COVID-19 with over 23,000 deaths, has been more careful than almost anywhere else in lifting lockdown restrictions. This has kept the rate of transmission relatively low over the past two and a half months. It is more comparable to that in European countries where the virus is fairly well contained like Germany or Denmark.

In this sense New York meets the first objective test for safely reopening schools but this is far from resolving the question of whether the reopening will actually be safe and successful. A letter signed by a number of groups entitled “Slow Down to Save Lives” correctly points out there are still neighborhoods, mostly Black and immigrant, with infection rates above the 3% rate for reopening set by the city and even above the 5% set by the state. They called for making decisions on reopening at the Community District level and for not reopening schools in an area with an infection rate higher than 3%. Socialist Alternative would agree with that demand. We do not, however, agree with some educators and the Democratic Socialists of America who say the schools should not reopen until the city goes without a confirmed case of COVID-19 for two straight weeks as this would keep schools closed indefinitely.

We have been very clear that the closure of schools and online learning has been a disaster for most working class and middle class kids and their parents. Many parents are eager to get their kids back in school not just because of the impossibility of remote learning in some circumstances but also because of the critical social services schools provide like free meals and counseling.

The remote learning nightmare has contributed to already massive racial and class inequities in education. We have called for educators, parents and scientific experts to have a direct say and veto in developing a plan for a safe reopening. We have called for taxing the rich to provide the resources to make this possible. None of this has happened in New York.

While capitalist politicians cry crocodile tears for the emotional and educational damage being inflicted on children, they only care about the reopening of public schools in terms of its effect on the economy so that big business can get back to making mega profits. But if the country had been locked down earlier and the reopening had been done in a more responsible way, millions would not have been infected, tens of thousands who died would be alive and it would be possible to reopen schools across the country. Trump’s criminal incompetence was a key part of the disastrous response but Democratic politicians like New York Governor Andrew Cuomo and New York City Mayor Bill de Blasio are also culpable.

The reopening plan in New York City, with its 1.1 million public school students, is based on using a “hybrid” model. Children will go to school on a rotating basis and do online learning from home on other days to keep class sizes low and reduce crowding in buildings. Families can also opt to have their children stay home and continue with online learning full time. The city also committed to regular testing of students and staff and cleaning of classrooms. They also agreed at the last minute, under pressure, that schools could create outdoor structures to expand their usable space and improve ventilation.

This all sounds good and in principle it is but the key sticking point is resources including sufficient staff to teach some students online while others are in school. The city education budget has already been cut by $700 million.This could mean 9,000 teacher layoffs! On top of that the state has begun to “temporarily” withhold 20% of its funding for school districts. The city’s School Chancellor, Richard Carranza, has openly admitted that without more money the schools will have to close. At the moment the state legislature will not even give the city the power to borrow money!

Take just one aspect of the plan, the outdoor structures. These were used during the 1918-9 flu pandemic. The city says schools will have to raise the money for this themselves. This is fine for schools in upper middle class neighborhoods where the PTAs sometimes raise millions each year. But in poor neighborhoods which need these structures the most there are no extra funds. This graphically shows how the lack of funding leads to completely unequal safety outcomes.

Meanwhile the effective rate of unemployment in the city is over 25% and there are discussions about massive cuts to public transit. The capitalist media tells us that transit and education are vital to the functioning of the economy of the nation’s financial capital. But they do not question the need for massive cuts. At best they call on the federal government to help bail out cities. We agree with that but in New York we also have a massive concentration of wealth with Wall Street stock market indexes reaching record highs in the middle of the pandemic and economic collapse. The wealth needed for a safe reopening and to keep the city’s services functioning is right there!

The leadership of the United Federation of Teachers which represents over 100,000 education workers in the city has come under massive pressure from rank and file teachers who are not convinced about the reopening plan. This pressure was exerted from a wide variety of teachers but was perhaps best organized by the Movement of Rank and File Educators caucus (MORE). Among many other issues raised were how to provide childcare for UFT members who are themselves parents on the school days when their children are doing online learning at home.

At the end of August, the UFT president, Michael Mulgrew, threatened strike action if the reopening was not delayed to give more time for schools to prepare. There was also significant pressure for a delay from the principals union. This threat which was credible led to a partial victory with the physical reopening delayed for a week and a half and an agreement that the union would inspect all buildings to make sure they were safe to reopen. But when teachers returned on Tuesday last week  to begin preparations, they found a number of schools had not been cleaned and lacked any PPE. This led to walkouts in several schools. While the Department of Education promises everything will be ready when students return on the 21st, “teachers are asking why that isn’t in place now, and why should they be the guinea pigs for safety.” (CBS New York, September 9)

At Middle School (MS) 88 in Brooklyn, teachers discovered after returning to their building that a colleague had tested positive for COVID-19. Teachers were then told the next day by the Department of Education (DoE) that it was safe to return to the building even though the proper level of contract tracing had not been done. The city’s own protocols were clearly not followed. Teachers were only told they needed to get tested before returning to the building on September 7, the day before they were to return!

The situation at MS 88 has now happened again at other schools. This and the lack of proper cleaning at some schools has led to further walkouts this week. This inspires very little confidence about what’s coming when students return. As the teachers at MS 88 wrote in an eloquent statement, “This new year has already evoked memories of last spring, when we had numerous cases among staff, tried to support our students through the loss of parents, grandparents and extended family, and had a colleague in the hospital, fighting for his life for 88 days.”

While the union leadership has adopted a slightly more militant posture under huge pressure, it is still avoiding the key fight on resources. Without a reversal of cuts and without hiring more teachers, counsellors, cleaning workers, etc, this reopening will not work. MORE has indicated support for the general demand for more resources, but their formal material is not concrete enough in calling for a tax on the billionaires and Wall St. This is an issue that urgently needs to be taken up by rank and file teachers in the UFT and forced on the agenda in the union.

We need mass demonstrations in the city, led by the unions, to demand taxing Wall Street and the billionaires to keep public transit running, fully fund school needs, and preserve all other social services. We should have no faith in Cuomo, de Blasio or any of the other corporate Democrats who have mismanaged this crisis and refuse to even consider taxing the rich. If they won’t listen, teachers, transit workers and the rest of the public sector workforces should stage a one day general strike.

There are different scenarios for how the reopening could play out in New York City– 42% of students have already opted for full time online learning. An even higher percentage of Black and Latino families have opted out of hybrid learning. If the reopening is chaotic, these numbers will continue to grow. A second wave of the pandemic could force the closure of the schools altogether based on the 3% infection rate which the city has said cannot be exceeded. It is also possible that the reopening will be somewhat successful but the latter will only happen if massive pressure is kept on with community and worker mobilizations, including credible strike threats.

Building the strongest possible alliance between teachers and working class parents was key to the gains made in the wave of teachers strikes in 2018 and 2019. It is also the key now to winning and executing a safe reopening.