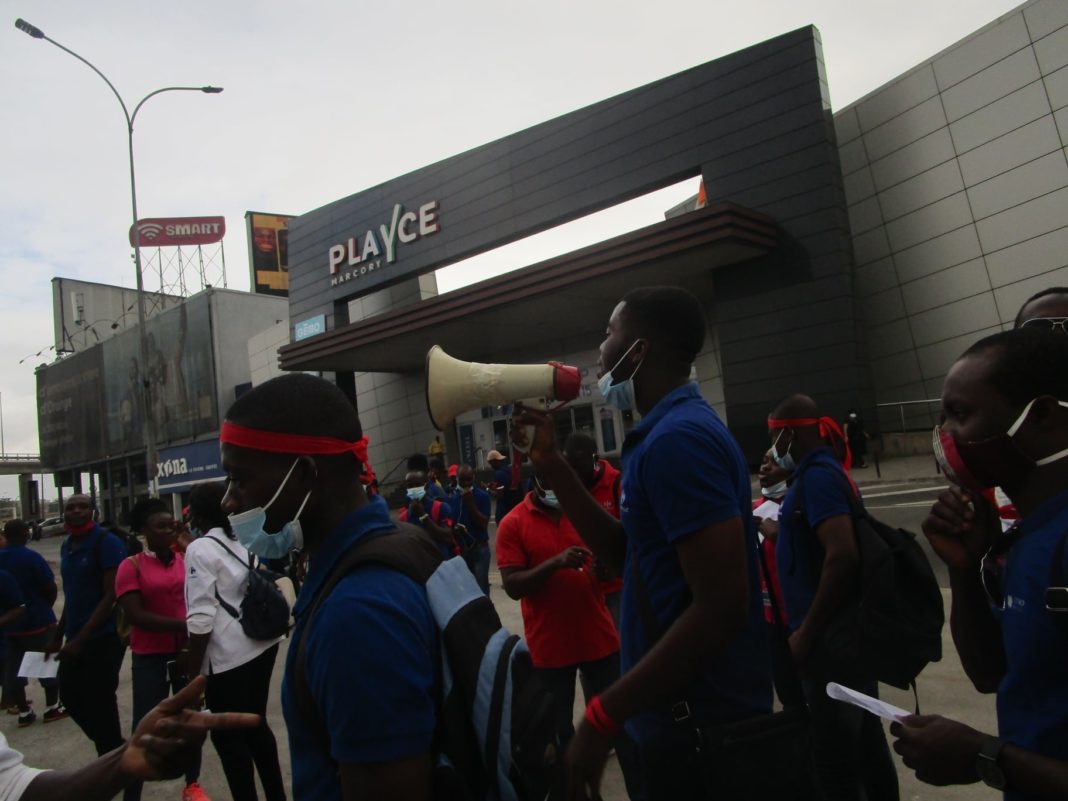 Workers at CFAO-Retail in Côte d’Ivoire have started a strike at four shopping malls: drivers, cashiers, technicians, accountants and department managers are all involved each presenting their own specific demands.

When in 2015, the shopping mall « Playce-Macory » was inaugurated by President Alassane Dramane Ouattara, sympathizers of ISA in Côte d’Ivoire predicted that this would become an important stronghold for working class struggle in the country. Five years later, history has proven us right.

The company, “Corporation For Africa & Overseas” (CFAO), a French corporation active in Côte d’Ivoire since 1852 and now present in 38 African countries has, since 2012, been 100% owned by the Toyota group. It has used Playce as a pioneering project to establish Carrefour supermarkets in Africa. Carrefour, another major French multinational corporation, is co-owner of the African malls. After the success of its opening in Marcory, an affluent district of Abidjan, it launched similar Carrefour shopping malls in three other Abidjan districts as well as in other African countries, such as Cameroon and Senegal.

Most of the thousands of people who came to work in CFAO/Carrefour’s shopping malls started with huge dreams. Some had never had the experience of working in a capitalist company. Many promises were made in the beginning, but never implemented. Although each day workers see mountains of wealth coming in and out of the mall, brought by affluent and not so affluent customers, they are only paid a meagre 150 euros per month, from which a big part is deducted to finance the company’s health insurance. Most employees make barely enough to cover their rent, having to rely on partners or second jobs to pay for food, school fees, electricity, or even the bus to come to work.

Meanwhile, the company is not ashamed to keep asking more from its workers. Truck drivers are used for home deliveries. Cashiers are forbidden to take tips from the customers. Section managers risk being fined for not meeting responsibilities, but are paid about the same as their colleagues. The company’s health insurance fund is always suspiciously “empty”. Some workers, such as the bosses’ relatives, get unexpected pay rises and other favours, while the rest are tired of waiting for year-long promises to be met. This is without mentioning constant harassment from top management.

In short, people who were part of the “urban poor” and recently joined the working class with huge expectations, are now experiencing first-hand all the ugliness of capitalist exploitation, and are utterly disgusted by it.

The strike came with surprising efficiency and unity. Workers stopped working in all four malls at once. Drivers, cashiers, technicians, accountants, department managers — all have their own specific demands. A very impressive picket was organized from early morning to dusk, even though the shop was not closed for those few who still wanted to work and for the adventurous customer. As usual, the shops’ entrance is overseen by a detachment of the government’s armed military police. On the picket, workers are organized along the same lines as they are in the shop, with department and store managers organizing the picket and talking to journalists. The strikers are also very aware of the traps put forward by their bosses: on one of the four pickets, our comrades were met with suspicion, and had to stand aside for an hour before a phone call from their own union gave the green light for the local picket organizer to talk to us.

In a country where most strikes are badly organized, with a divided workforce, different “unions” in competition with each other, ineffective leaders, and a tendency for strikes just to fight for “their own corner”, this strike is different. It can become a model for the whole Ivorian working class.

It is all the more important in that it poses very sharp questions. What is the point of the country’s much-vaunted “emergence” with a 10% economic growth and the building of super modern shiny shops, if it means that thousands of workers are still being paid under the survival threshold? It is a very telling lesson about the class nature of the “development” of the last 10–20 years in Africa. And it also raises the question: how are we going to get out of widespread poverty, when even those mega projects fail to meet expectations?

Please send solidarity messages and pictures to the striking CFAO-RETAIL workers in Côte d’Ivoire and solidarity messages from workers’ delegations and groups from the retail industry, especially the Carrefour Group, which has a worldwide presence under various brands (locations can be found here) as well as from CFAO, established in Nigeria as “CFAO Motors Nigeria’ to the General Secretary of the Carrefour workers’ union at Konanalfred100@gmail.com and konankonanjules@gmail.com.