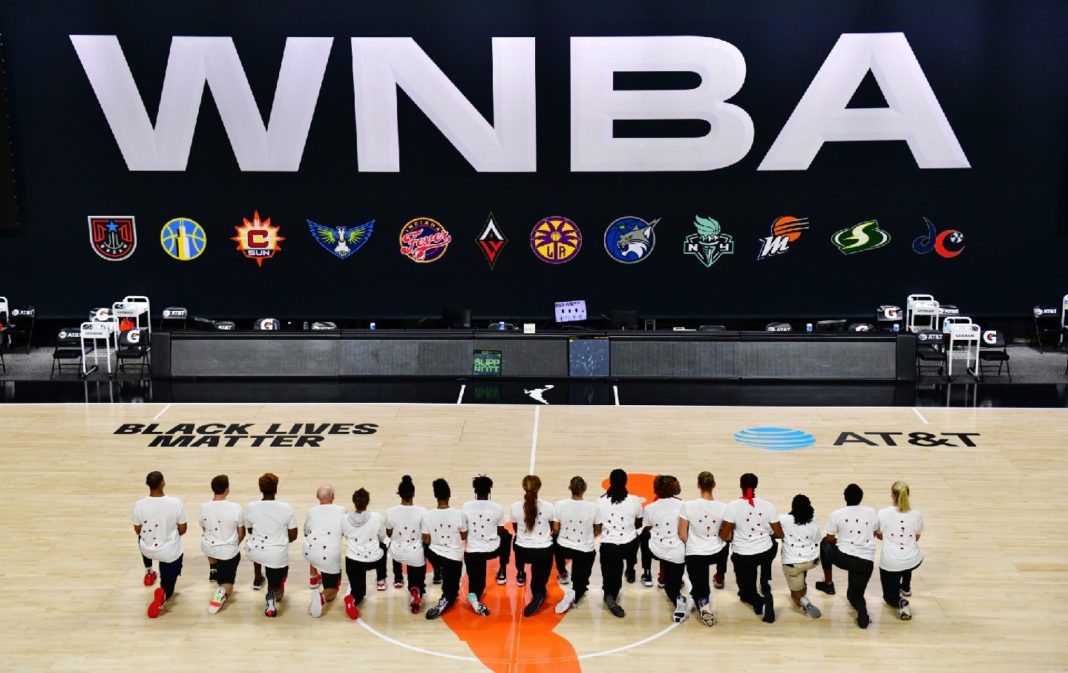 On August 26th, exactly four years since Colin Kaepernick began his peaceful protests of systemic racism and injustice in the United States, the NBA’s Milwaukee Bucks set in motion a political strike that will have an important impact on the movement for black lives and workers in general. Like Tommie Smith and John Carlos’ black power fist at the 1968 Olympics and Muhammad Ali’s resistance to the Vietnam War before it, the players’ protest against oppression quickly dominated headlines across the country. Almost instantly after the Bucks announced their strike, players on teams across the league also decided to withhold their labor and the NBA’s playoff schedule that day melted into air.

In an unprecedented show of solidarity, the strike leapt across the border of men’s professional basketball as players in the WNBA, MLB and MLS voted to sit out games as well. Team owners and league administrations scrambled to catch up after being caught completely flat footed. When Major League Soccer released a statement saying the league decided to cancel games, LAFC player Mark-Anthony Kaye countered, “We as players made the decision. Fix this, please give the right narrative.”

The catalyst for the decision to not play was the shooting of unarmed Jacob Blake seven times in the back by a Kenosha, WI police officer. However, as with the George Floyd protests, it was not just the single act by a racist local police department, but the build up of a nationwide refusal to take meaningful action that made up the content of the political strike. Of all the professional sports leagues, the NBA and WNBA have led the way in terms of acknowledging the Black Lives Matter movement with slogans featured on league courts and player jerseys.

But this political signalling has quickly proven itself to be empty symbolism, as the popular demand to defund the police goes ignored across local and state governments. Breonna Taylor’s killers have still not been arrested despite months of massive public outcry to do so. Police departments continue to brutally assault BLM protestors while showing sympathy to right-wing militias, if not outright working with them. Many athletes have acknowledged and are attempting to move beyond this symbolism and toward real action. As Boston Celtics star Jaylen Brown said, “That’s the incrementalism idea that keeps stringing you along to make you feel like something’s going to happen, something’s going to happen. People were dying in 2014, and it’s 2020 and people are still dying the same way. They keep saying reform, reform, reform, and ain’t nothing being reformed.”

Professional sports owners purchase teams as business opportunities, and then unload massive costs on the public to fund their stadiums while privatizing the profits. Working class people bleed the colors of their local teams, allowing owners to hold cities hostage by threatening to move their team unless the city coughs up taxpayer money to subsidize stadium costs. Teams should be taken into public ownership and run for the benefit of players and fans, not as vanity projects for billionaires.

Further complicating matters is the racial dynamic of the NBA. Owners are almost exclusively white while players are predominantly black, leaving doubt as to whether systemic racism is an actual concern for the NBA’s bosses. The players correctly realized that an escalation to strike action, which directly cuts into league profits, was the next step forward to actually achieving meaningful change towards racial justice.

Anti-racist sentiment amongst the public has taken a measurable leap forward as shown in a recent poll where 57% of responders supported the strike action the Bucks players took while only 28% were in opposition. This is a drastic improvement from 2016 when the majority of Americans disagreed with Colin Kaepernick’s peaceful protests kneeling for the anthem. President Trump continues to attack black athletes who protest as a way to further his divisive agenda and tap into the racist sentiment of his base.

With the national spotlight on them, the professional athletes’ courageous decision showed the broader American working class a blueprint they can use in their own workplaces to pressure for change. The U.S. ruling class has spent decades trying to undercut any resurgence of the labor movement, but an action like the NBA players took this past week shows how much leverage a worker holds by refusing to perform labor. The players’ decision to strike was not made in isolation as it drew on the momentum and strength from the nationwide rebellion in effect since the murder of George Floyd in late May. Athletes, like essential workers during COVID-19, have been shoved back into their jobs under unsafe conditions adding further dimensions to the strike. NBA players specifically have been locked into a physical bubble in Orlando to complete the season, separated from their family and friends. It is no surprise that the corporate media quickly adapted a narrative referring to the players’ actions as a ‘boycott’ rather than the ‘s-word,’ worried that workplace strikes could catch fire and spread to other industries.

The American political system is a bipartisan gridlock where even amidst a global pandemic and untold economic devastation, workers are left wondering when they might receive any additional assistance to fend off evictions or receive affordable healthcare. Workers and those seeking racial justice cannot turn to the Democratic Party for material support as they already hold power in the cities where many of the militarized police departments exist. To assuage the concerns of wealthy suburban voters, Presidential nominee Joe Biden has declared that the police should not be defunded. It goes without saying the Republican Party is no friend to those fighting to end systemic racism as they actively foster racial tension and xenophobia in their ranks.

So where can workers turn? The NBA players previewed the path forward. While they are some of the most privileged members of the working class, with many earning lucrative salaries, athletes are still workers and hold massive leverage against the owners if they refuse to play. Professional sports are an avenue for the ruling class to reinforce the “boss – employee” hierarchy but this works against them when the employees take subversive action on the national stage. An amusing thought experiment is to imagine NBA owners playing basketball to replace striking players. While athletes can play an important role in ending racial oppression, the decisive factor must be action taken by the broader working class and labor movement.

The power the working class holds has been revealed during this pandemic as the Trump administration refuses to take action to prevent mass deaths as a result of the COVID-19 pandemic. Their anti-science agenda still continues to downplay the pandemic in fear that even a partially shut down economy would slow profits to its big business donors. It’s clear that it is not business owners but workers who make the economy run. As congress sits in stalemate, workers would do well to remember that the longest government shutdown in U.S. history ended in the blink of an eye when the airline industry was ground to a halt as a result of sickouts and flight attendants threatening a strike.

The NBA players and its union agreed to resume playing this weekend after only two days off the court. In return, the league and its owners have committed to forming a “social justice coalition” and to turn arenas into polling places for the 2020 election. Obviously these “concessions” are vague and do nothing to directly address the systemic issues that plague the country. A hypothetical coalition, at best, would come to the same conclusions that are already staring us in the face: figurative gestures can’t root out the underlying causes of racism in America. Worse, with the player’s leverage taken off the table, the owners have no reason to even follow through.

A testament to how threatened team owners were by the strike was the lightning quick intervention of former President Barack Obama and Michael Jordan, who both pushed players to get back on the court as quickly as possible while accepting the incredibly weak concessions. As the poster children of “post-racial America”, Obama and MJ represent the mistaken idea that putting people of color into positions that still require exploitation of the global working class will solve racism. Jordan, a billionaire and a current team owner, has a direct financial stake in getting his players back on the court and has been historically silent on social issues throughout his career over fear of alienating revenue sources. As President, Obama specifically oversaw the brutal police and military occupations of Ferguson and Standing Rock, which helped lead us into the current state of law enforcement terror. Even more telling of where his true intentions lie, Obama never pursued policies to reduce the racial wealth gap during his two terms. As capitalism’s failures mount, Obama is continually forced back into the spotlight to help prop up the legitimacy of the system he was tasked to manage as President.

The players mistakenly allowed the capitalist class to insert itself and thus take over the negotiation process instead of continuing to strike until a better plan was in place. Athletes should continue to press for systemic change through actual policies that would widely improve the material conditions for all, such as universal healthcare or the formation of a worker’s party free from corporate influence. It was easily anticipated that people of color would overwhelmingly bear the brunt of the COVID-19 pandemic given the long-standing racial and economic inequities baked into American life. Medicare For All is enormously popular amongst Democrat voters with 87% in favor, but the recent Democratic National Committee elected 125-36 to keep universal healthcare off their platform! Ushering fans into basketball arenas to vote for this party is an absolute dead end if we’re talking about Black lives mattering.

The unprecedented cross-sport wildcat strike of the past week may not have ended in giant victories for the BLM movement but it showed working people all over the country how they can harness their own leverage against the political apparatus that subjects them to endless austerity and for many, the loss of their lives. While the upcoming elections are important, the players’ strike shows that we don’t have to wait until a single, arbitrary date in November (or worse, four years from now) to pressure for and win meaningful change.