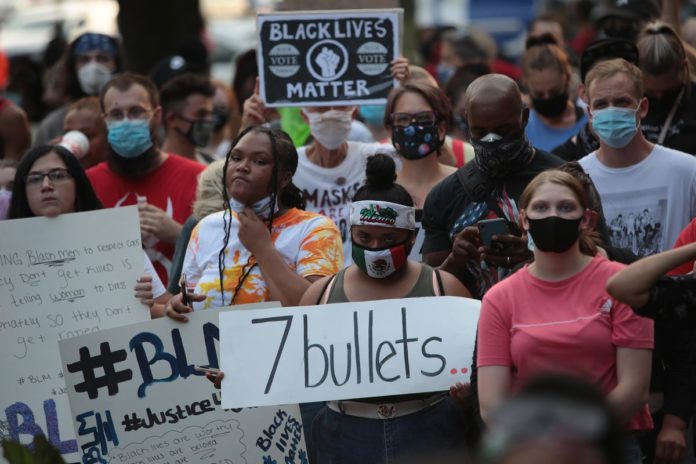 Jacob Blake: unarmed, Black, father, and paralyzed from the waist down. Seven shots in his back at point blank range from a cop’s gun in Kenosha, Wisconsin.  The video footage taken by a bystander witness is unmistakable.

Just as in the aftermath of George Floyd’s death at the hands of the Minneapolis police, the city was in revolt for days with justified rage accumulated through decades of unheard peaceful pleas from ordinary people and empty lip service from establishment politicians. All of it compounded by a new economic great depression and a deadly pandemic that have taken an especially heavy toll on Black working class communities.

In the first days after Jacob Blake’s shooting, a long simmering rage erupted as people took to the streets. Hundreds marched peacefully through Kenosha – a small city with a population just over 100,000 – in the days following the shooting. An understandable rage simmered at these demonstrations and in some cases it turned to riot-conditions with ransacked stores and burned down buildings.  Riot police and National Guard troops were sent in and the brutality from these forces was kicked off on the very first night of protests with tear gas being deployed almost immediately. Authorities tried to pen protestors using dump trucks only for those trucks to be set on fire.

Right wing militias were given special treatment from the brutal crowd control tactics that the cops and National Guard were using against anti-racist protesters. They were even thanked by the police for their presence. This type of blessing cleared the way for a 17 year old Blue Lives Matter fanatic and ex-police cadet Kyle Rittenhouse to shoot and kill two protesters and badly injure a third. All the justifications by his rightwing lionizers fall apart when you consider how long it took for Rittenhouse to find himself in a jail cell compared to 12 year old Tamir Rice, a Black boy who was murdered by Cleveland police for having a toy gun within seconds of their arrival.

Unlike the narrative of endless wanton destruction that Trump and rightwing media would have us believe, much of the devastation on the streets of Kenosha has been caused by reckless instigation by law enforcement as well as brutal violence from right wing vigilantes. There are elements within the demonstrations who are indeed engaging in antisocial behavior which, unfortunately, will play into Trump’s hands. The movement should push back against these tactics and instead focus on bringing a wider layer of working people into the movement in Kenosha.

For the Trump administration, the events are just being used in a cynical and deceitful manner to energize the far right wing vote in the presidential elections.  As if to throw gasoline into a fire for a ghoulishly cynical campaign ploy, Trump visited Kenosha this Tuesday to “survey the damage” and speak to police. Shocking to absolutely no one, Trump is not set to meet with the Blake family and in his speech he did not mention Blake’s name once.

Opposite Trump has been the completely lifeless response of the Democratic Party. Democrat Alderman Anthony Kennedy, relayed to the New York Times what he spent two hours telling people at the scene of the shooting “I understand why people are hurt. Why they are frustrated, but justice can’t be street justice. The process has to work out.” He did not supply examples where that has worked out. The response from other local Democratic Party politicians echoed the same, including the Mayor John Antaramian. Kenosha District Attorney Michael Graveley said “We ask people to be as patient as they can. We support all advocacy that is peaceful. I’ve had thousands of emails today from people who are quite appropriately expressing their strong feelings about this case.” The reality though is that too often the very length of the process is used to delay an outcome until long after protests and the pressure they bring have died down.

In the same breath of lip service to Black Lives Matter, it didn’t take long for Wisconsin Governor Tony Evers to send the National Guard. Not just that, he doubled the number twice. He then made a performative rejection of additional federal aid only to wilt after being scolded by top GOP officials in the state. Evers essentially opened the door to allow Trump’s goon squad of special agents from the Customs and Border Patrol who have been busy marauding the streets of Kenosha abducting protesters in unmarked cars.

For days, heavily armed right wing militias were given free reign by the police. Meanwhile activists that were simply providing food to protestors had their van window smashed in and were abducted SWAT operations style.

We need to be clear that unfortunately violence from the far right has become a feature of the period of revolt and reaction we are living through. No wonder given the endless fusillade of incitement raining down from the highest authorities of the country in the Trump White House and across the Republican Party. The most in your face example of this is how the wealthy St. Louis couple who pointed their guns at protesters received an official invitation to the Republican National Convention and were the object of frequent applause at the event.

The movement against racial injustice and all forms of oppression of course must take the greatest precaution going forward, but we cannot be bullied into submission by rightwing vigilantes. Otherwise, it will simply make all future protests far less safe because all it would take is one reactionary zealot to disperse them. Instead, it’s vital that we develop a serious organized collective self defense strategy to protect our movements. This means, in Kenosha and other cities where the movement is at a fever pitch, urgently organizing democratically run mass meetings in working class neighborhoods, especially communities of color, that can take up the question of self defense against vigilante terror.

These meetings, however, cannot be limited to a discussion of self defense. The movement needs a path forward. It needs structures and a strategy to bring wider sections of the working class into the fray. Any mass meeting to discuss the way forward should have the enthusiastic participation of the labor movement, faith organizations, and community groups. In Minneapolis, a key moment in the early days of the protests took place when Minneapolis bus drivers refused to transport protestors to jail. This is a model for how the labor movement can take up the banner of Black Lives Matter.

The extreme far right, while statistically significant enough to be a danger to our movements, is much smaller than our side. They can be more confident and devastating in some cases because the racist capitalist state will look away or even give a wink and a nod as they do their dirty work. But as we saw – the Charlottesville style confidence of their side was shut down by mass working class action like in Boston where 40,000 people turned out and chased away the few dozen far right wingers that showed up in 2017. This type of mass demonstration and display of solidarity should be a model for our movement.

Minneapolis offers a clear warning for the political establishment’s tactics aimed at demobilizing direct action and protest. In the wake of George Floyd’s murder, Mayor Jacob Frey played up the role of alleged white supremicist vigilantes infiltrating the rebellion as a way to justify mobilizing the National Guard, and pressure protestors to stay home. Although thousands of Minnesota National Guard were deployed, they never arrested a single white supremicist vigilante — but what is well documented is their role suppressing non-violent protests, targeting journalists, and terrorizing working-class people claiming to keep the neighborhood safe.

During the Minneapolis Rebellion, working-class people, especially people of color, were effective at stopping vigilante violence. For example, when someone was seen trying to start fires at a Somali mall, the Somali community organized to confront him while the police and National Guard ignored reports. In another example, protesters confronted a suspected undercover police officer breaking windows and starting fires at an auto parts store across the street from the Third Precinct.

While the political establishment will use increased police repression against the protestors, they will also open up longer term investigations linked to vague promises of reforms to slow down the protests. The best way to counteract this establishment tactic is for the movement to develop mass, democratically organized meetings to openly discuss what’s happening, to plan out next steps, and to mobilize the full power of working and oppressed people to win justice.

While Minneapolis City Hall mobilized the National Guard, they also made a giant promise to “abolish” the Minneapolis Police Department, making national headlines. Unfortunately, a section of social movement organizations declared victory too early, sowing illusions in participating in City Hall’s dead-end process, which slowed the momentum of the movement.

When Socialist Alternative Seattle City Councilmember Kshama Sawant, who has a solid track record of taking on the police, pointed out the dangers of these vague promises from establishment politicians, she was attacked by defensive Minneapolis City Councilmembers. When Socialist Alternative went further at exposing the limits of City Hall’s vague promise, we were lectured by city staff for “unhealthy cynicism.”

In the end, it was Minneapolis City Council who cynically pandered to the Minneapolis Rebellion at the height of the movement, only to utterly fail at passing any meaningful changes to policing in Minneapolis.

A few weeks after making their historic promise, Minneapolis City Council only managed to reduce the police budget by less than 1%, which included some important police-alternative pilot programs but did not fundamentally change the enforcement priorities of the MPD. When City Council’s proposal to change the city constitution to allow for further reforms to policing ran into opposition from the city bureaucracy, rather than work to re-ignite the movement to force change, City Council retreated with more vague pledges to make changes next year.

The primary lesson from Minneapolis is that spontaneous rebellion is not enough to win lasting change. Without a well organized movement with real roots in working class and oppressed communities, it’s very difficult to withstand the many tools available to the political establishment: to combine state violence, misinformation, and misleading statements designed to demobilize the movement into safer channels that ultimately cannot win fundamental, systemic changes for working class people and communities of color.

The biggest victory so far of the Justice for George Floyd rebellion in June is that broad support for Black Lives Matter is at an all time high. One poignant poll conducted by Monmouth University at the time makes that conclusion unmistakeable – 54% of Americans thought that burning down Minneapolis police station was justified after Floyd’s slow execution in broad daylight.  The problem is that the scale of clearly directed and organized expression is far smaller than the support that exists. This can change if the labor movement, socialists and other large social movement organizations pooled their collective muscle towards the effort.

Pro-Athletes Lead the Way by Striking for Black Lives!

Though it was brief, the sector wide strike for black lives in professional sports is an excellent example and inspiration. Milwaukee Bucks and Brewers, Seattle Mariners, Cincinnati Reds as well as teams in the WNBA and Major League Baseball all took part. Miami Heat player Andre Iguodala put it best  – “you have to be willing to sacrifice corporate money for people to realize there’s a big problem out there.” Unfortunately the players union buckled to the intense strike breaking pressure from ex president Obama as well as Michael Jordan NBA owner of the Charlotte Hornets. What if this was spread to key sectors of unionized industry as well as the public sector?

A Wisconsin wide and nationwide day of action around the following demands would be a good start towards these efforts: