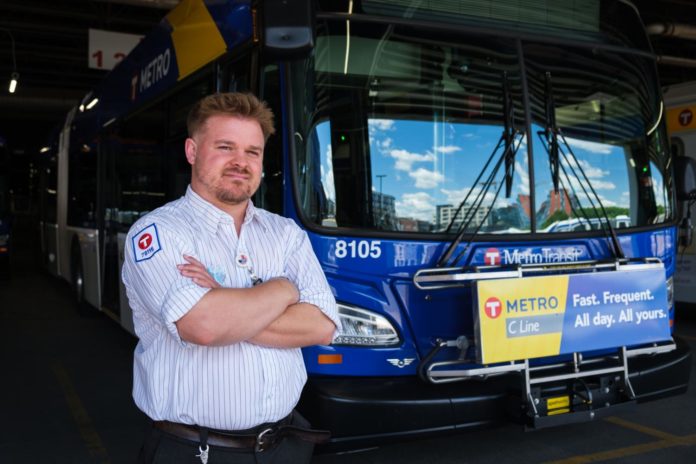 During a #JusticeForGeorgeFloyd protest on May 27, Twin Cities bus driver and Amalgamated Transit Union (ATU) Local 1005 member Adam Burch refused to drive a bus filled with arrested protesters to jail for the Minneapolis Police Department. His action inspired other bus drivers around the country to take similar action and, along with Socialist Alternative, he launched a union member petition supporting demonstrations.

Here James Graham, a member of Socialist Alternative and member of the United Library Workers union in Pittsburgh interviews him.

What made you refuse to transport arrested protesters that night?

I had participated in the first night of protests the night before, including the rally at 38th and Chicago and the march to the 3rd precinct. At work the next day, there was a message put out to all drivers that the Minneapolis Police Department (MPD) needed “police buses” for the intersection at the 3rd precinct where I knew an occupation had developed from the previous evening. I knew that this meant that MPD was planning on making mass arrests of protesters because they need Metro Transit buses to do so. I wanted to use my position as a bus driver and union member to refuse my labor to – at the very least – make it difficult for MPD to arrest protesters and suppress the movement for justice for George Floyd. I wanted the mass protesting to continue until all the movement’s demands were met.

How did you and your co-workers go about organizing that?

After my initial social media post received a lot of reactions and engagement, Socialist Alternative Minnesota decided to launch an online petition to use as an organizing tool among my co-workers and fellow union members. I also had shop floor conversations with other drivers in my garage. The conversations were already very politicized making it easy to discuss with them what we as drivers should do and not do.

How important was your union in being able to do that and in backing you up?

Very important. If I didn’t have membership in a union that protects my rights as a worker I never would have had the confidence in the first place to withhold my labor as a political statement and encourage my co-workers to do the same. Also, I’m only one driver in one garage.

Metro Transit eventually decided that it wasn’t going to ask any drivers to take arrested protesters to jail, and that drivers could refuse to shuttle police around. It was the union that forced the company to take that position which was a win for the movement. It was the union that took up an initiative from a rank-and-file member and turned it into a mass collective action. It really showed the strength of the union in real time, and made me an extremely proud member of my union.

What kind of action do you think other workers can take in the workplace to help build the Black Lives Matter movement and win justice for George Floyd?

Since launching the petition we used it to organize other workers and union members beyond just transit workers. During a big rally planned at the fifth precinct in South Minneapolis we organized a labor contingent that then joined the main rally. We had signs and banners that clearly identified ourselves as union members in solidarity with the movement for justice for George Floyd. A handful of rank-and-file union members spoke, linking the role labor can play in social movements. People there were excited to see a section of the labor movement in such strong solidarity with the BLM movement. Other union members were inspired by what we were able to do with our position in ATU and wanted to do something with their union.