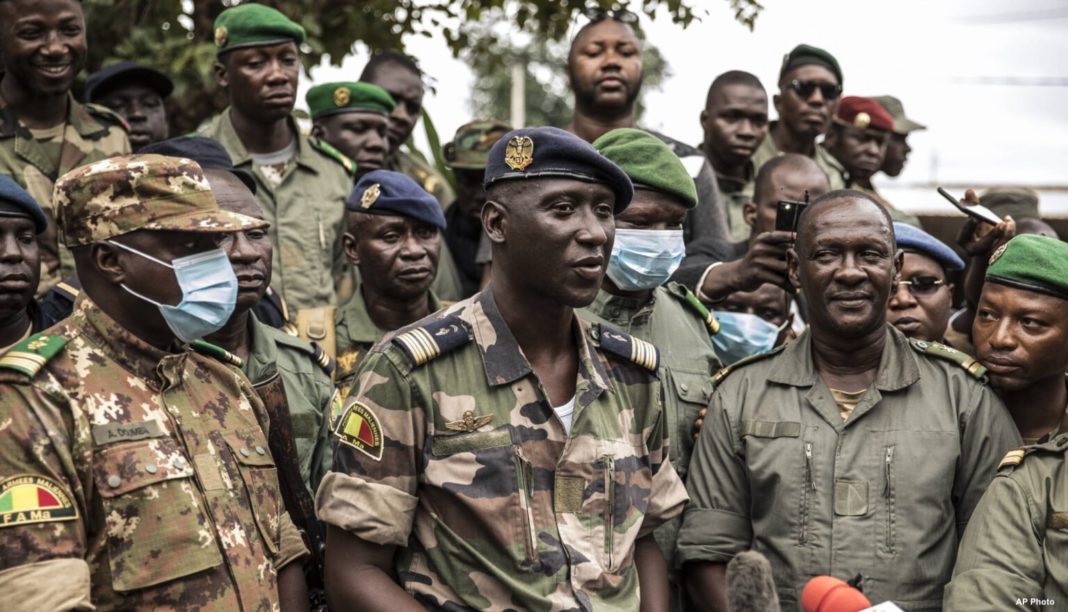 On August 18 President Ibrahim Boubacar Keïta of Mali was overthrown in a military coup. For months workers and the poor masses have been demonstrating to demand his resignation, yet this coup does little more than change one section of the ruling elite for another.

The military coup in Mali, Tuesday August 18, will not satisfy the needs of the masses, who have been demonstrating for months to demand President Keïta’s resignation. Rather the coup is underlining the deep crisis in the country and the entire Sahel region.

The officers behind the coup, naming themselves the National Committee for the Salvation of the People, immediately said they would organize elections. However, over the last weekend, a plan was presented for a three year transitional government led and dominated by the military.

On the day of the coup, they arrested Ibrahim Boubacar Keïta (IBK), president since 2013 and his prime minister Boubou Cisse, who both immediately resigned. This weekend, meeting representatives of the neighboring Economic Community of West African States (ECOWAS) led by former Nigerian President Goodluck Jonathan, the coup leaders promised to release Keïta.

The coup was initiated from the same military camp in Kati as the coup in 2012 that overthrew the then president Amadou Toumani Touré. In contrast, however, the leaders this time are high-ranking officers, colonels, including the deputy chief of staff of the air force and, it is speculated, with support from a leading general. Several of them have received training from the US and French military, and been allies in imperialist military actions against islamist forces. “Col. Assimi Goita, a Malian military officer who declared himself provisional leader of the country, participated in U.S.-led military exercises and training aimed to counter extremist groups operating in the Sahel region”, reports the US website foreignpolicy.com. Goita is head of Mali’s special forces.

The coup was welcomed by demonstrations in the capital, Bamako, particularly by the youth. The Washington Post reports that: “The office of the recently nominated justice minister, Kassoum Tapo, was looted and set on fire. He recently promised to jail protesters who have been on the streets as part of the so-called June 5 movement rallying against entrenched poverty, rising insecurity and corruption”.

Mass demonstrations demanding the president resign started on June 5. The trigger was the parliamentary elections in March and April, hastily called at the same time as Covid arrived in the country. Only around a third of the electorate voted. When the government parties only gained a minority of the votes, the constitutional court overruled the result in 31 seats.

The demonstrations reflected the anger not just at the elections, but at the increased violence and killings by jihadists and the failed war against them by imperialist forces and the national army. “In the first six months of this year more than 1,800 people were killed in fights involving jihadist groups and ethnic militias, about as many as were killed in the whole of last year”, the Economist reports. In 2019, 200,000 people were made internal refugees and more than 1,000 schools were closed as a result of armed fighting. There are also reports of state forces being involved in massacres. The imperialist forces lack support from the population, with growing opposition particularly against the French forces.

Another key factor is the economic hardship against the background of the corruption of the elite, among them the president’s son. Mali is ranked 169 out of 191 countries on the United Nations’ list of GDP per capita (USD 822, compared to Sweden in 13th place with USD 54,043). The social crisis, with mass unemployment and price hikes, has been further aggravated by the pandemic. This goes on at the same time as multinational companies exploit its gold mines and the government signs agreements with China’s Belt and Road Initiative to build large railway projects.

Within the armed forces, there has been growing demoralization over the war against the islamists, alongside discontent over pay.

The demonstrations, called by the June 5 Movement-Rally of Patriotic Forces (m5-rfp), were first met with brutal repression. On July 10, state forces killed 10 and wounded 85 people taking part in what started as a peaceful demonstration. The protesters then occupied the state television building and tried to occupy the National Assembly as well. As with many other movements globally in 2019–20, the repression did not stop the movement.

The leading figure in the m5-rfp is a populist Iman, Mahmoud Dicko. However, despite the demonstrations demanding the president’s resignation, Dicko kept open the possibility of an agreement with Keïta. Immediately after the coup, Dicko declared he would no longer be involved in politics while other leaders of m5-rfp stated the coup had fulfilled the demands of the people and called for celebration.

Leaders in neighboring countries have been extremely worried over the mass movement and been trying to mediate since mid-July. They proposed new elections for the 31 parliamentary seats, but both the government and the m5-rfp opposed this.

The coup has been condemned by governments everywhere — from the UN security council, including China and Russia, the African Union, the 15 countries of ECOWAS and all the major European powers headed by France, the colonial power until 1960 that still dominates the region.

The coup, and even more the deep crisis, takes place in a country that has been a top priority for imperialism’s war against islamists. The UN force in the country (MINUSMA) has more than 12,000 soldiers, including 400 from China and 142 from Sweden. More UN soldiers are killed in Mali than anywhere else.

France has increased its presence this year, with more than 5,000 troops. The US, the UK and Germany also have forces in the country.

This intervention started in 2012–13 when jihadist forces took over the north of the country following the military coup. However, “Despite nearly a decade of international counter-terrorism operations and security assistance programs, these groups have kept their grip on parts of central Mali and spread further south into neighboring Burkina Faso and Niger”, summarizes foreignpolicy.com.

Violence has increased, with the islamists, Jama’a Nusrat ul-Islam wa al-Muslimi linked to al-Qaeda and Islamic State Group in the Greater Sahara both increasing their actions. There are also several criminal militias, dealing with trafficking and drug smuggling.

The imperialist powers and neighboring states above all want stability and fear both mass movements and military coups spreading in the region. ECOWAS immediately closed the borders to Mali and stopped all trade, alongside sending its representatives to talk to the coup leaders.

However, neither imperialism nor the coup leaders will achieve any stability. The high-ranking military leaders met no opposition in taking power, but they have no program or policies to meet the expectations of the masses. They now have support, but for how long?

Their first priority following the coup was to declare its ambition to continue cooperation with France and the ECOWAS governments. They also met with leaders of the ruling party for discussions.

If that is the case, the military take over could be similar to what happened in Zimbabwe in November 2017, where Mugabe was forced to leave by the military, but leaving the regime intact. So far, the coup makers in Mali have made very few promises at all, apart from general talk of a new constitution and coming elections.

The crisis of the Sahel region and the threat from right-islamist forces can not be solved by military forces. Even the BBC commented: “However, it is increasingly clear that the problem facing Chad, Niger, Mali, Burkina Faso and Mauritania, known as the G5 Sahel, is not just the presence of armed groups, and that more than military action is urgently needed”.

The rules are set by the global capitalist system. Mali, as most other African states, has been ordered by imperialism and its institutions such as the IMF, to privatize and prioritize exports. It is one of the largest gold producers in Africa, although this is of no benefit to the mass of workers and poor. Instead, imperialism has focused on using military force to keep the state intact. In 2016, the European Union signed a deal with Mali to block refugees for a small compensation.

The islamist groups have grown out the collapse of the already weak economies and states, and their support increases as state repression is stepped up. Workers and the poor in Mali and across the Sahel need to be organized democratically, to take the gold, agricultural products and natural resources into their own hands, and tear the region away from imperialism and capitalism.