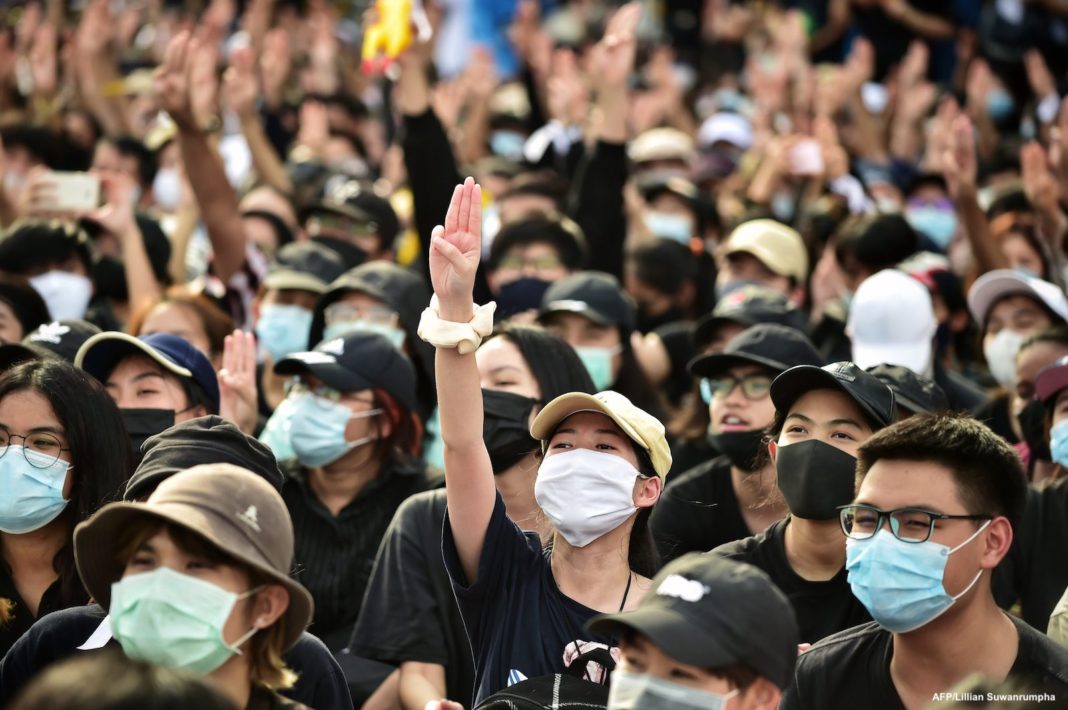 The wave of protests and demonstrations in Thailand is growing. On Sunday, August 16, more than 10,000 gathered to demand the resignation of the military led regime.

The protests now include open criticism of the monarchy, an extremely important development in a country that retains harsher laws than any other country against doing so.

Daily protests from students have been organized in more than half of the country’s 77 provinces. On Friday August 14, almost 1,000 students gathered at Chulalongkorn University in Bangkok, defying a ban on the rally and the government’s arrest of a protest leader.

Across Thailand, there have been huge protests against the military regime that took power in 2014 and in 2019 formed a “civilian” government, after fraudulent elections. The dictator, general Prayuth Chan-o-cha, became prime minister.

On August 16, at least 5,000 people held an anti-government rally in the afternoon at the Democracy Monument in Bangkok. The regime had readied 600 police officers in anticipation of the rally, and fearing potential escalation, Prayuth urged the authorities to be patient and not to use violence against the protestors. By that evening, at least 12,000 students were gathered, calling on Prayuth and his government to quit.

While demands for “reform” of the monarchy instead of abolition are more often being put forward currently, there is the potential for this to escalate.

Protestors use the “three-finger salute” (from The Hunger Games) as a symbol of defiance and resistance.

The open criticism of the monarchy in the present demonstrations is unprecedented compared to previous protests.

Under Section 112 of Thailand’s penal code, anyone who defames, insults, or threatens members of the royal family can be jailed for up to 15 years. During the military rule 2014 to 2018, there were at least 98 charges filed.

In 2016, the present king, Maha Vajiralongkorn with the title Rama X, succeeded his father Bhumibol, who was king for 70 years. The king spends most of his time in a luxury palace in Munich, Germany, and continues to do so while his “subjects” suffer under the Coronavirus pandemic. In 2018, he took hold of a $30 billion worth royal property company, and followed in his father’s footsteps as the world’s richest monarch. It is hardly surprising that on Twitter, the hashtag #มีกษัตริย์ไว้ทําไม (#whydoweneedaking?) had over a million reposts, despite it being an illegal post.

The pandemic has been devastating for ordinary Thais. Since it began in March, income for 70% of workers has dropped by 47%, and last month the Federation of Thai Industries predicted that almost 8 million jobs could be lost (Thailand is the 11th largest car producer in the world). Unemployment was already at over 3 million in July, while household debt continues to rise.

Yet the extremely sharp class divide in Thailand is nothing new. Between 2015 and 2018, the number of those living in poverty rose from 4.85 million to almost 7 million. While at least 16 million people may qualify for state aid, and there were 38 million informal workers in Thailand in May, the country is 9th on this year’s Hurun Global Rich List of dollar billionaires; 57 have a combined wealth of $135 billion.

The iron grip of the junta

In 2018, the military junta, recently known as the National Council for Peace and Order (NCPO), formed the now ruling Palang Pracharat Party. The 2017 constitution, brought in amongst a referendum with a low turnout in which criticism of the draft was banned, firmly establishes the military dictatorship’s hold on power. Palang Pracharat fared badly in terms of votes and only just won the 2019 election, thanks to the support of the Senate in which seats for military officers are reserved.

Prayuth and his party themselves stand on shaky ground; as well as the NCPO, they rely on a coalition of around 19 other parties to keep a majority in the House of Representatives. Loyalties towards the king rather than the government exist among certain sections of the military establishment, and King Vajiralongkorn has consolidated his control of the army to the extent of establishing his own protective armed forces.

There is also the potential threat of a coup against Prayuth by the hardline elements of the junta. No prime minister can be assured of safety from this; General Prem Tinsulanonda, who was prime minister 1980–88 and died last year, faced down two separate coups, despite being closely ingrained with the royalist establishment.

Thai politics has a history of coups and conflicts; since 1932, there have been 18 different coups by royalist forces. In 2006, the Thaksin Shinawatra government was overthrown by the military. His party was banned, and the military establishment ushered in Abhisit Vejjajiva as the replacement prime minister. From this erupted the conflict between the “Red Shirts” (supporters of Thaksin Shinawatra, formed around the United Front of Democracy Against Dictatorship, UDD) and the “Yellow Shirts”.

While the UDD portrayed it as a struggle between poor rural masses and the elite in Bangkok, it was in reality a fight between two different wings of the capitalist class. Shinawatra gained popularity for some reforms for the poor in order to strengthen his base, but his main policy was to satisfy multinational companies and his own business. The monarchy and top military, representing another wing of capitalists, forced Shinawatra into exile.

These tensions continued and in 2014, General Prayuth seized power himself through a military coup amid the instability and crisis within Thailand.

The Future Forward Party, formed in 2018 and led by billionaire Thanathorn Juangroongruangkit, gained huge popularity amongst young people. The regime moved quickly to not only ban the party, but to press criminal charges against Juangroongruangkit and other leaders.

After the party was banned in February this year, 55 of its members set up the Move Forward Party as its successor, even adopting a very similar logo. But the number of protests in recent weeks show that huge numbers of people in Thailand have little faith in “parliamentary” politics, which only serves the military junta.

The courts, the monarchy, the military — all the various arms of the state apparatus serve to preserve the rule of the elite.

The workers and youth need to build their own political representation. Democratic structures to organize and coordinate the protests today could be a step towards such initiative. It furthermore will need a program that fights the whole rotten system and raises the need of a society in which the interests of the majority of the people are central; in short, a socialist society.

What we stand for: