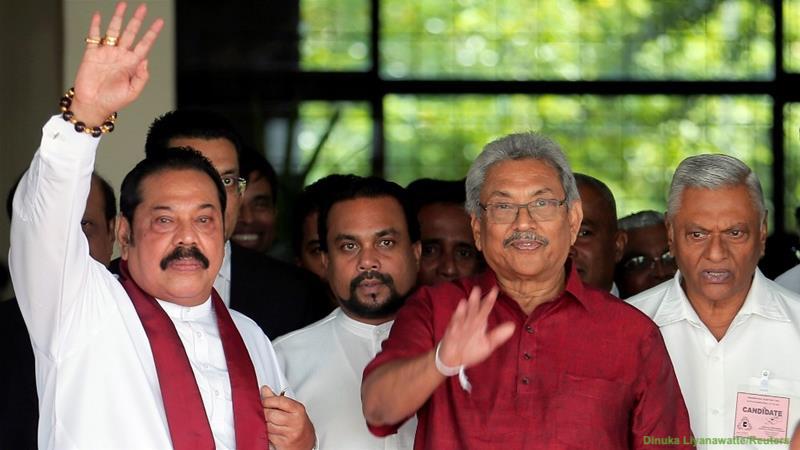 Sri Lanka is one of the few neo-colonial countries with a history of a certain degree of democratic rights and social achievements. This has been ensured by the existence of a labor movement and a left wing that were historically stronger than elsewhere. In recent decades, this has been increasingly undermined. The parliamentary elections of August 5 are a new step in that process.

In the parliamentary elections, the alliance around the Rajapaksa family won convincingly. The SLPP (Sri Lanka Podujana Peramuna or Sri Lankan People’s Front) obtained 59% of the votes and is five seats short of a two-thirds majority in parliament. President Gotabaya Rajapaksa then quickly appointed his older brother, Mahinda, as prime minister. The family was hoping for a two-thirds majority in order to amend the constitution and extend presidential power, and to remove the restriction on the number of terms of office to two. They will probably find enough partners to achieve this two-thirds majority.

The division of the opposition reinforced the possibility of a two-thirds majority. The hope for change that the conservative United National Party brought to power in 2015 turned out to be vain. The UNP was divided by an internal factional struggle. Former party leader, Sajith Premadasa, left with most of the UNP parliamentarians and allies to take part in the elections under the name Samagi Jana Balawegaya (SJB). The SJB won 23.8% and 54 seats. The alliance around the UNP led by Ranil Wickremesinghe fell from 106 seats in 2015 to just one seat. Ranil himself was not elected to parliament for the first time since 1977. This puts an end to the traditional dominance of Sri Lankan politics by the Sri Lanka Freedom Party and the United National Party. Both have been reduced to a marginal role and made way for more unstable successors, in the case of the SLPP heavily dependent on one family clan.

After these elections, the Rajapaksa family will try to consolidate power. After the bloody civil war that ended in 2009, Gotabaya and Mahinda Rajapaksa were not prosecuted as war criminals because of their role in the massacre that killed up to 40,000 Tamils. On the basis of the military victory, the subsequent “peace” and the strengthened Sinhalese chauvinism, they gained support in the years immediately following the end of the war. This came to an end when it turned out that peace did not equate to social progress for the majority of the population. On top of that came serious accusations of corruption.

In 2015, the alliance around the UNP won both the presidential and the parliamentary elections, but without an absolute majority in parliament, forming an uncomfortable coalition with the SLFP. In the absence of change for the life of the majority of the population, Sinhalese chauvinism remained the central political theme. At the end of 2018, the parliament was dissolved, but this decision was cancelled by the Supreme Court. A period of political instability followed in which Mahinda Rajapaksa was the de facto prime minister. At the end of 2019, Gotabaya Rajapaksa was elected president with 52% of the votes. Now the SLPP, led by Mahinda, has achieved a higher percentage but a slightly lower number of votes in the parliamentary elections.

To achieve a two-thirds majority, the SLPP would have needed to score better in the north and east of the country, even if there was progress compared to the presidential elections at the end of last year. In the provinces where the Tamil population forms a majority, the results were divided. This is an expression of the growing mistrust in the established Tamil politicians who hope to obtain rights for the population only through negotiations and political combinations, while the economic background and the position of Sinhalese chauvinism in the south of the country do not allow this.

The left was not really involved in these elections. The left-wing chauvinist JVP lost half of its six seats under the name Jathika Jana Balawegaya (National People’s Power). The small socialist parties did not achieve significant scores. Parts of the former left merged into the two big alliances. For example, the Communist Party traditionally supports the alliance around the authoritarian Rajapaksa clan (this link has in the past led to a scandalous attitude of Fidel Castro and Hugo Chavez, among others, who refused to condemn the genocide against the Tamil population). On the other hand, the former Trotskyist, Vikramabahu “Bahu” Karunaratne, of the Nava Sama Samaja Party (NSSP) was a candidate for the right-wing UNP.

The victory of the SLPP will strengthen China’s position as a privileged partner of Sri Lanka. Mahinda Rajapaksa previously brought Chinese infrastructure projects to Sri Lanka. Nevertheless, the Indian regime of Modi hopes to maintain an impact, partly on the basis of the disastrous economic situation in Sri Lanka. While the island was less affected by Covid-19 than its large Indian neighbor, the economic consequences are far-reaching. After an economic contraction of 1.6% in the first quarter, the World Bank expects GDP to decline by 3.2% for the year as a whole.

In these circumstances, it is an illusion to think that there will be stability and growing prosperity for the population. The only way the Rajapaksas can consolidate their regained power is through more authoritarian rule and stronger Sinhalese chauvinism, which carries the danger of an escalation of violence against Muslims and Tamils. At the same time, the government policies will further erode the historically-won social achievements. The workers’ movement must respond to this by reorganizing itself from the bottom up, in the workplaces, around a program of social progress and democratic rights, which must explicitly include the need for unity among workers and oppressed. Capitalism has only increasing poverty and sectarian tensions to offer the majority of the population; a unified struggle is needed for a socialist alternative.