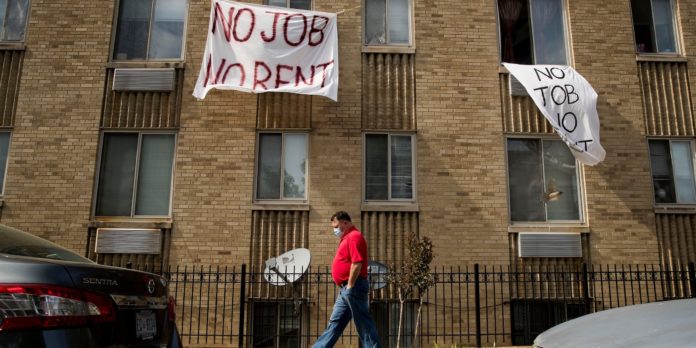 Before COVID-19, 75% of renter households (around 30 million homes) spent 30% or more of their income on rent. When the pandemic hit, tens of millions of people already struggling to cover housing costs were suddenly out of work. While expanded unemployment benefits, the $1,200 stimulus checks, and a patchwork of federal, state, and local legislation have staved off an immediate, massive eviction and foreclosure crisis, many of these protections have since expired. Without replacements for these protections, a series of new studies forecast that between 30 and 40 million people could be at risk of eviction in the U.S. in the next several months.

At the end of July, the federal ban on evictions and foreclosures, as well as the $600 per week federal unemployment top up both ended. As negotiations around the next round of federal stimulus stalled in Congress, in early August Trump issued an executive order that, while touted as a response to the coming eviction crisis, is simply a toothless recommendation to federal agencies to “consider” measures to protect against evictions.. It does not extend the federal moratorium on evictions that lapsed in July, which even if reimplemented would only apply to properties with federally backed mortgages, only about 25% of the country’s 44 million rental units. In over 30 states, eviction moratoriums have ended, leaving renters with no protections at all.

In some places, eviction hearings have resumed, taking place en masse in repurposed convention centers or via video conference. Many renters have been forced out by landlords in violation of eviction moratoriums, or left their homes because they knew they couldn’t catch up on rent.

The housing crisis, which has been deepened by the pandemic, needs much more than the important step of extending eviction and foreclosure moratoriums. We need to fight for rental and mortgage relief and cancelation. In April, May, and June, there wasn’t the sudden sharp drop in rental payments from residential units that many expected, largely because of the stimulus and unemployment money. Two-thirds of workers who were eligible for extended unemployment protections were making more than their normal wages, and 30% of renters reported using government aid for rent payments.

But as the stimulus money has dried up, now 32% of renters and homeowners have entered August with unpaid rent and mortgage payments, with over 20% owing more than $1,000. The use of credit cards to pay for rent has been steadily increasing since March. Small landlords who have lost rental income are at risk of foreclosure.

To the big landlords and real estate investors, housing is a commodity to buy and sell in order to maximize profit. Evictions, massive rent increases, and intimidating tactics are just tools of the trade. In the context of the mass unemployment crisis and the exodus from many cities, some landlords are realizing that letting tenants stay is better money in the long run when a vacant unit could sit empty for months. Recent studies show that  49% of renters who entered August with unpaid bills had renegotiated leases, set up a repayment plan, or were in the negotiation process. Only 18% said they had asked about a plan and were denied. Rents are dropping in major cities from San Francisco to Boston as landlords desperately try to lock in tenants, and rents in Manhattan dropped for the first time in a decade. The pressure of tenant organizing across the country that has reignited in recent weeks in New Orleans, Kansas City, Louisville and New York City has also played a role in forcing concessions from big landlords.

A failure to extend unemployment benefits could release a wave of evictions, an increase in homelessness, and desperation for millions amidst a deadly global health pandemic. Congress, state and local legislators have responded far too slowly and inadequately, and we can’t rely on them and their real estate backers to act. But while renters’ futures hang in the balance, landlords have been forced onto the back foot, and the potential to win more concessions is on the table. We need to get organized in our buildings and in our communities and build mass action for eviction defense and to demand a cancellation of rent and mortgage payments.