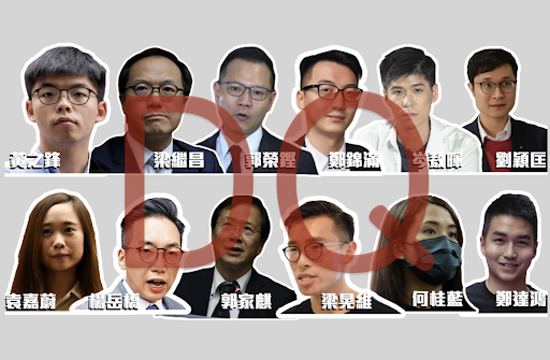 The passage of the draconian Hong Kong National Security Law means the counter-revolutionary suppression by the Chinese dictatorship (CCP) has officially arrived, following the ebb of the mass revolt against police violence that started in June last year. That the new law has not enabled the dictatorship to “stabilize” Hong Kong is shown by the local government’s decision, fraudulently citing the recent upturn in Covid-19 infections, to cancel the legislative elections due to take place in one month’s time.

On July 30, the government disqualified (“DQ”) twelve candidates for the Legislative Council elections originally set to take place on September 6. Of the twelve disqualified, four were pro-US “militants”, three were localists (right wing Hong Kong nationalists), four were members of the moderate pan-democratic Civic Party, plus another moderate pan-democrat running for election in the functional constituencies. The functional constituencies are undemocratic corporatist seats reserved for special business and professional groups, which account for half the 70-seat Legco.

In this latest wave of “DQ”, following earlier purges in 2016, 2017, and in subsequent by-elections, the CCP has excluded even moderate pan-democratic politicians, not only localists and “radicals” as in previous rounds of disqualification. Even with a legislative election system heavily rigged in favor of the pro-government parties, the dictatorship fears a loss of control in the next Legco elections, such is the massive opposition to the authoritarian regime.

A “primary election”, organized by pan-democratic groups in July, brought 610,000 people out to vote for anti-government candidates. While the choice of candidates reflected enormous political inconsistencies and lack of a clear alternative within the mass anti-government struggle, the huge turnout so soon after passage of the new law shook the regime. Beijing officials immediately declared the primary election to be “illegal” and in breach of the national security law.

The CCP clearly wants a large-scale disqualification of opposition candidates because the position of its puppet local government is chaotic and unstable. Even if the Legco is just a lame duck parliament, the CCP will never allow too many unstable factors. It is impossible for the CCP to allow the opposition to control more than half of the seats, which in itself would be a humiliating act of defiance by Hong Kong’s electorate.

Furthermore, this would allow the opposition to paralyze the Hong Kong government’s funding and operations and plunge it into a constitutional crisis. Carrie Lam’s government is unelected and not in any way controlled by the semi-elected Legco, but it must gain Legco approval for its yearly budget and certain other decisions. More importantly, if the opposition obtains a majority in Legco, this could have a big effect on people in mainland China by shattering the CCP’s propaganda claims that Hong Kong’s anti-government protests represent only a handful of “foreign forces with ulterior motives”. The masses in China may thus question the regime’s version of events and the Hong Kong protests could even spread to China.

The regime is still traumatized by the results of November’s historic district council elections, which gave 87 percent of the seats to opposition candidates. The CCP and its Hong Kong support parties were stunned by the size of the voter backlash in November, when they believed the popular mood had become negative to the protests. So big was their miscalculation that China’s regime-controlled media was completely silent over the Hong Kong election results for three days: editors and censors could not work out what had happened or how to explain it.

Not confident that the “trap” of the Legco elections could be navigated safely, even after the latest mass disqualifications, the government on July 31 announced postponement of the elections for one year due to the pandemic. Even next year there is no guarantee the elections will be held. As we explained when the national security law was imposed on June 30, the regime is now making up new rules and restrictions from one day to the next.

In the face of fierce domestic and foreign struggles, including renewed infighting within the top levels of the state, China’s dictator Xi Jinping cannot allow his ruling authority to be hit so hard at this time. Instead of waiting until after the election to impose martial law and shut down Hong Kong’s Legco, they have calculated that it is better to suppress it decisively now.

With the Legco elections postponed until 2021, the current Legco’s term may possibly be extended. Some pro-Beijing politicians are calling for the establishment of a “provisional Legco” based on government appointment and including the Legco’s current members. In this case, the three current members disqualified from standing in the next elections (Dennis Kwok, Alvin Yeung, and Kenneth Leung Kai-cheong) are also likely to be excluded. This would leave the establishment camp with control of over two-thirds of the seats. It would then be possible for the CCP to push through a fake universal suffrage reform similar to the one that was rejected under mass pressure in 2015.

However, simply postponing the election is only a delaying tactic, and it will create additional instability in the political situation for the coming year, which is not in line with Xi Jinping’s imperious style. If the CCP adopts its hardest line, it will go for a completely rigged Legco election. However, it is believed that Xi Jinping fears a blatantly fake election may trigger a wave of sanctions by the West.

On the one hand, the CCP wants to demonstrate the deterrent effect of the National Security Law, but it is also afraid that if it detains more internationally renowned pan-democratic politicians (such as Joshua Wong, Jimmy Lai, etc.), this will provoke a strong backlash from Western governments. Although Western governments do not really care about democracy and human rights issues, today Hong Kong is on the front line of world imperialist conflicts between China and the US. Therefore it is likely Western governments will resort to new countermeasures.

In the third wave of the Covid-19 outbreak, from July 19 to the time of writing this article, there have been more than 100 cases of infections in Hong Kong per day. The government has always refused to completely close the border with China, and grants Chinese and Hong Kong businessmen and seamen the privilege of exemption from isolation and quarantine. From February to the end of July, more than 290,000 people entered the city without compulsory quarantine. Many experts have suggested that this is the source of the third wave.

In addition to imposing restrictions on gatherings to a maximum of two people, the government initially ordered restaurants to ban all dine-in meals throughout the day. On this basis a large number of grassroots workers (such as construction workers and cleaners) are forced to eat in the street. At the same time, the restaurant of the Central Government Offices continues to be open for dine-in.

This absurd policy triggered a huge public backlash, forcing Carrie Lam’s government to withdraw it just two days later. Once again it showed how top officials are completely out of touch with the reality of how grassroots people live, producing another fiasco.

As of July 26, the utilization rate of 649 negative pressure wards and 1,207 negative pressure hospital beds reached 82.6 and 78.9 percent, respectively. Additionally, the isolation facilities of public hospitals are facing tremendous pressure.

The CCP stated that it would assist Hong Kong in building a “makeshift hospital” and send mainland medical experts to Hong Kong to carry out large-scale Covid-19 testing. But Hong Kong healthcare workers have raised concerns that the CCP will exploit this opportunity to take over Hong Kong’s healthcare system and even to collect DNA samples from Hong Kong people during the testing process, for later political surveillance purposes.

The current policy of Xi’s regime towards Hong Kong is not so much aimed at suppressing the struggle in Hong Kong as it is to shock the factions hostile to his rule inside China’s party-state, because more and more figures within the CCP elite believe Xi’s domestic and foreign policies are too hardline and create further problems for the Chinese ruling class.

Today this opposition has resulted in unprecedented pressure. Of course, Xi must also suppress domestic rebellion, because the economic crisis triggered by the epidemic has thrown the country into a downturn, and it will only be a matter of time before the high unemployment rate makes the working masses fight back.

For now, any concessions by Xi Jinping are equivalent to asking him to lay down his power, and dictators will never do this voluntarily. So the only thing he can do is further intensify the repression; but the anger of the people in Hong Kong cannot be calmed. It can be seen that the political situation in China and Hong Kong is entering a state of revolution and counter-revolution, and the mass struggle in mainland China will become the key. Socialist Action supports the struggle of the working class against authoritarian repression and capitalism.