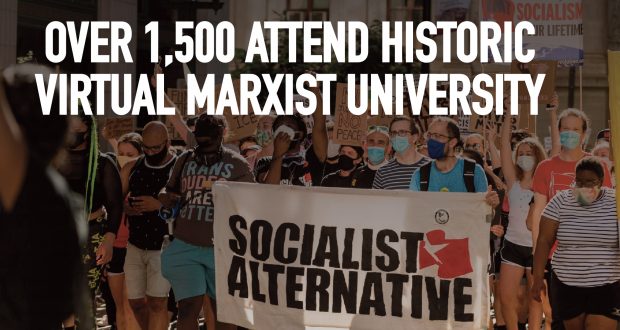 Socialists from 37 countries attended the largest ever international gathering of International Socialist Alternative (formerly the CWI) between July 18 and 25.

The first ever ISA Virtual Marxist University was an incredible success. It was full of vibrancy and enthusiasm, and at the same time, was extremely serious. Its success reflected a strong, youthful, confident Marxist international organization determined to prepare politically for the stormy period to come. The more than €197,000 and rising raised in the financial appeal which culminated at the event’s closing rally — 5 times greater than the next largest financial collection at any international meeting over our near-50 year history — spoke to all of these attributes and more.

Its organization presented many challenges. Sessions spanned over entire days, facing head on the problems posed by an event covering a world of timezones. Hundreds of comrades from Brazil, Mexico, Canada and the United States tuned into sessions starting at 3 and 4am, while those in Asia stayed attentive until late into the night.

Each day had its own theme, reflecting a crucial aspect of the political preparation necessary for Marxists to understand and intervene in a crucial period in world history. Saturday July 18 started with a plenary on World Perspectives, with Sunday then featuring a series of commissions delving deeper into different aspects of the world situation, characterized by a historic crisis of the system on all levels. This included a commission on Marxist Economics attended by over 200 comrades, and a fascinating discussion on the new Cold War and era of mounting inter-imperialist rivalries.

On Monday, commissions discussed the fight against oppression worldwide which featured an in-depth discussion led by US Socialist Alternative comrades on the Minneapolis-born 2020 Black Lives Matter rebellion, which has been a crucial part of ISA’s work over the past months. Comrades involved in leading ROSA — International Socialist Feminists, led off several commissions on socialist feminism, and at the same time, over 100 comrades gathered to discuss a socialist, working class approach to the fight for LGBTQ+ liberation.

Tuesday saw 13 different commissions discussing a Marxist view of history, from the lessons of the 1930s, to the process of Chinese capitalist restoration. Another highlight of this bloc was a commission discussing the 100th anniversary of the great Mexican revolution, led by members of ISA’s new, dynamic and growing Mexican organization, Alternativa Socialista.

Building the forces of Marxism

On Wednesday, sessions spanned over 12 hours — several brave Seattle and California comrades braved the meetings from 12.30am right through 1.30pm! This is precisely the type of determination required for the building of revolutionary parties worldwide — the theme of the day’s proceedings.

Our Marxist University was not a gathering of academics, but of actively involved revolutionary socialists, learning lessons from history and Marxist theory in order to better build support for socialism in workplaces, schools and neighborhoods.

A plenary session heard from comrades from every continent, addressing different aspects of party building. Then, 15 different commissions discussed these issues in depth, including recruitment and consolidation, building revolutionary finances, and an ambitious plan and perspective for Marxist publications in the 2020s, including social media.

Discussions on youth and student work underlined the crucial necessity of a turn to the youth, amid the explosive political radicalization and awakening of a new generation, whose outlook is being shaped by decades of crisis and struggle.

The seriousness and ambition of these discussions was particularly striking. Of course, the success of the VMU did not take place in a vacuum, but in the context of steps forward in the building of the forces of Marxism. The last 6 months have seen the fastest phase of growth ever for Socialist Alternative in the US. In England, Wales and Scotland, our newly refounded section has grown by more than 20% since lockdown, with comrades in Ireland and Belgium also reporting increasing levels of growth.

For ISA, building on solid foundations also means deepening our roots in workplaces and in the workers’ and trade union movement. For the first time at any international meeting, the VMU organized a bloc of commissions, on Thursday, to bring comrades together from different sectors internationally, including health, education, transport, industry, retail etc. These discussions allowed comrades to both learn from each other’s experience, and to lay the basis for future coordinated work in solidarity and struggle.

A theme throughout the week’s proceedings, and featuring in a special plenary on Thursday, was the grave situation in Hong Kong, where a historic crackdown on democratic rights by the CCP regime has shaken the world, and opened up a new chapter in the Cold War between US and Chinese imperialism. This follows a heroic mass movement for democratic rights which inspired workers and youth internationally.

Socialists, and all fighters against oppression in Hong Kong and in China, will require the solidarity and support of the workers’ and socialist movement worldwide. The work of organizing real socialist opposition to the imperialist dictatorship of the misnamed Chinese “Communist” Party is of vital importance, and our whole movement has a stake in it. For this reason, bringing the gravity of the current situation to the attention of the movement internationally is also of paramount importance.

Friday’s commissions all focused on revolutionary theory, without which, as Lenin said, there can be no revolutionary movement. Each commission was based around important Marxist texts. From the Communist Manifesto to Capital, comrades from around the world read and energetically prepared for weeks in advance of the VMU to get the maximum benefit from discussions on crucial books, pamphlets and documents.

This reflected how deepening our focus on political education and Marxist theory will be a crucial part of preparing ourselves to take advantage of an epoch of revolutionary opportunity. As was pointed out in the VMU’s closing rally, Russian revolutionary Leon Trotsky famously commented that the party that led the Russian Revolution started not with dynamite, but with Marxist ideas. So must we, as we fight to build such a party, on a world scale, today.

A colossal collective effort and achievement

Between plenary meetings and blocs of simultaneous commissions, the event included 78 different sessions. Plenary sessions, on world perspectives and party building, began with introductions broadcast simultaneously with subtitles in 12 languages. Throughout the week, heroic teams of translators worked over separate channels, ensuring a genuinely internationalist and participative event.

This was only possible to execute on the basis of an unprecedented collective effort. It is such an approach which will ultimately be necessary for a revolutionary party and movement to be successful in transforming society. Teams of comrades drawn together from different countries prepared intensely for months to master the technical necessities required, organize the financial aspect of the event, mobilize attendance and plan the political content.

Above all, such an event would have been impossible in an organization without a high political level, and a wide layer of comrades, both young and old, capable of providing quality Marxist insight and analysis. Over 140 different comrades gave introductions and concluding speeches throughout the week! People from 33 different countries also contributed points and questions in the discussions. Many comrades commented both during and after the event, on the inspiration provided by the emergence of a new generation of leading comrades from sections around the world, with countless outstanding contributions throughout the week.

This underlines one of the defining traits of ISA — the struggle to build a real collective leadership, and a revolutionary party in which not only a small handful of individuals provide quality political leadership.

The VMU ended with a closing rally, which was not only the end, but the climax, of proceedings. It heard from comrades around the world and drew the lessons of the week together in a powerful message — “We Need a Party of World Socialist Revolution — Build ISA!”.

The rally included an important financial appeal, to fund the work of our international going forward. An ambitious target of 90,000 — double our largest ever collection — was set, and comrades worked doggedly to achieve it over weeks before the event. The result, when it came in, literally took many comrades’ breaths away: Over 197,000, representing the dedication and sacrifice of revolutionary militants from over 30 countries.

Build ISA! Fight for Marxism to be the defining idea of the 2020s!

The VMU — which was a product of the disappointing need to cancel our in-person international summer school — is symbolic of how ISA has faced up to the challenges of the new situation. Our approach has been determined, ambitious, optimistic and revolutionary. We have not allowed lockdown to prevent us from stepping up our activity, or from growing our forces. We are united in the confident belief that the 2020s is an epoch which can be defined by the ideas of Marxism, amid the rottenness and bankruptcy of capitalism. Get in touch today, and help us to build a worldwide revolutionary socialist party worthy of the name!