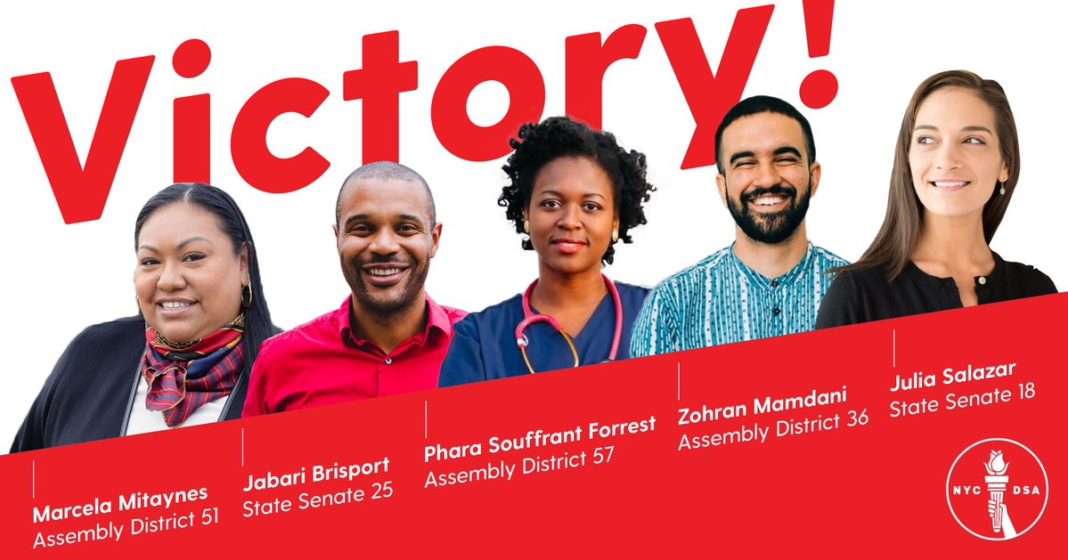 The June primary results are finally in, with a clear result: “Socialism won,” as victorious New York State Assembly candidate from Queens, Zohran Mamdani, wrote on Twitter. The five statewide candidates endorsed by the Democratic Socialists of America (DSA) all won their primaries, including several with come-from-behind victories on absentee ballots. We congratulate State Sen. Julia Salazar, Mamdani, Jabari Brisport, Marcela Mitaynes, and Phara Souffrant Forrest, and all their campaigners. Rep. Alexandria Ocasio-Cortez handily won her primary election as well. Socialist Alternative called for a vote for all of these candidates. Furthermore, at least two self-described democratic socialist candidates not endorsed by DSA also won at the state level, in addition to progressive but not democratic socialist candidates like Jamaal Bowman for Congress.

DSA’s victories break new ground for socialist politics in New York. These victories came because of the inability of the establishment to effectively deal with COVID-19, racist police violence, and the economic effects of the pandemic, including 25% real unemployment in New York City. The DSA socialist candidates campaigned on a platform to house New York’s over 70,000 homeless, build affordable housing, reform the criminal justice system, win single-payer healthcare, promote the Green New Deal, and tax the rich and Wall Street to pay for it all. These reforms are crucial, and Socialist Alternative supports them and looks forward to continuing to fight along DSA, labor and social movements to achieve every victory possible under capitalism and advance a vision for a socialist world.

How will these radical reforms be won? Socialist Alternative’s own seven-year history in elected office with Council Member Kshama Sawant in Seattle — punctuated by the first big city $15 minimum wage in 2014 and the $240 million Tax Amazon victory this month — proves that socialists in office can achieve major victories with a powerful organized social movement behind them rooted in daily grassroots organizing, one capable of dragging the establishment towards reforms and placing them on electoral notice if they stand in the way. To win DSA’s platform, we must unite our social movements, like Black Lives Matter, with movements in labor, environmental, and the women’s and LGBTQIA+ community. These united mass movements must have democratic structures, including mechanisms of accountability that ensure socialist elected politicians effectively battle for our reforms in the Legislature.

To that end, the growth of DSA in the Legislature should be accompanied by the formal creation of a Socialist Caucus. Socialist elected officials are in enemy territory, specifically the halls of power devised by capitalism to manage the state on behalf of the billionaire class and Wall Street. Trying to placate or mollify establishment leaders will not work. The approach instead must be to use the office as a bully pulpit to expose the failures of the capitalist leaders’ approaches and their system based on profits and greed. To this end, since we have plainly seen the failures of Senate Majority Leader Andrea Stewart-Cousins and Assembly Speaker Carl Heastie on so many fronts — to tax the rich even a penny more during COVID-19, to give just one example — DSA legislators should nominate their own candidates to lead the chambers when the Legislature convenes in January 2021, especially Sen. Julia Salazar for Senate Majority Leader.

There is also a need to build an organization in the districts that would conduct monthly town hall meetings, including discussion, debate, and decision-making. Those meetings should be a place of organizing the people, labor, socialists and youth to win their legislative agenda and program: a people’s assembly.

The economy is in freefall, and the capitalists are literally more concerned about returning to profitability and maintaining the dominance of the financial sector than the lives of essential workers, teachers, and seniors. Wall Street and their representatives will attempt to put the burden of the historic economic, social, and health crises on working people. That means that socialist representatives will need to organize to defend against these attacks and win further victories, while using elected office to build the forces of the working class, youth, and the most oppressed to move beyond a racist, sexist, capitalist system.

Although DSA candidates have been able to use the Democratic Party ballot line to achieve victories, there is a sharp limit to using that party to win radical reforms. There is a growing rift within the Democratic Party, and future clashes are poised between its progressive/socialist wing and its establishment wing, headed by Governor Andrew Cuomo, Carl Heastie, and Andrea Stewart-Cousins.

New York State is quickly running out of money, and going after the billionaire class to find new revenue requires an independent class struggle approach — arm in arm with working people across New York, in neighboring states, and across the globe. Such a class struggle-based, internationalist approach is the opposite of what Cuomo or the current shoddy crop of Legislative leaders want to see from socialists. They would prefer socialists who are willing to play nicely and provide left cover to the Democratic Party establishment who represent Wall Street. This underscores all the more that on the heels of its victories, DSA must be bolder in terms of connecting the dots for the working class on who our enemy is, what a united mass movement can accomplish, and proposing the right leadership and democratic, accountable structures necessary to win a socialist New York and a socialist world.

We look forward to continuing the dialogue with DSA members and elected officials. Solidarity and congratulations again to the socialist candidates on their victories!

May 1st, International Workers’ Day – Capitalism is the Virus: Socialism is the Only Cure