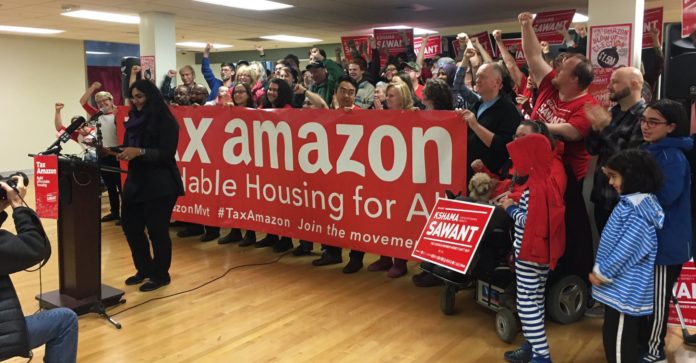 Today’s vote to pass an Amazon Tax in Seattle is a historic victory for working people.

This victory was hard fought and it was hard won.

By a movement that wouldn’t give up, and that faced down a seemingly endless series of obstacles: from the shameful attempts of corporate Democrats in the State Legislature to pass a ban on municipal big business taxes, to unfounded delays in the City Council, to a pandemic and lockdown which prevented signature gathering, to relentless attacks in the corporate media in Seattle and nationally. We are winning because of the determination of workers and socialists to smash all obstacles and find a path to victory. Congratulations to the grassroots Tax Amazon campaign led by the coalition led by my organization, Socialist Alternative, and progressive organizations and unions.

Today’s vote comes eight months after working people roundly defeated Amazon in the elections, and two years after Amazon and the Chamber of Commerce bullied City Council, with the majority of the Council shamefully repealing the 2018 Amazon Tax. Now, Jeff Bezos and his billionaire friends are wishing they could call a do-over and have the modest 2018 tax back. Because this new tax on Seattle’s wealthiest businesses is four times larger. And every penny is needed, and far more in fact, to stop the racist gentrification, sky-high rents, and homelessness in this city with a massive expansion of public affordable housing and jobs. This is a housing and jobs bill.

It’s no accident this comes in the midst of the historic Black Lives Matter rebellion. The legitimacy of the status quo has been utterly smashed by the protest movement, the pandemic, and the deepening crisis of capitalism. In Seattle, Tax Amazon was widely taken up at the Justice for George Floyd protests where we gathered 20,000 signatures in 20 days. Now the total is over 30,000.

The Amazon Tax is perhaps the biggest progressive win in Seattle since socialists and labor unions led the way on the $15 minimum wage, which passed first here and then was won in cities and states around the country. We hope that once again we can inspire working people and youth nationally and globally – in this crucial fight against the billionaire class which is attempting to force working people to pay for the current crisis of capitalism with massive budget cuts. Our rallying cry nationally must be NO to austerity! Tax big business, not working people! The Amazon Tax shows working people do not need to only play defense, we can also go on the offensive and win big.

We must reject all the pathetic attempts of corporate media, who after years of attacking the idea of taxing big business and those fighting for it, now desperately want to spin a narrative to discourage working-class struggle and empowerment.

Let’s be real: the Amazon Tax had nothing to do with the “savvy” of establishment politicians. It had EVERYTHING to do with the self-organization of working people.

Specifically, it has been the threat of the movement’s ballot initiative that has pressured the city establishment to act. Tax Amazon filed the ballot measure after a series of grassroots democratic “Action Conferences” where hundreds of people discussed and voted.

We must build on our momentum. The movement to Tax Amazon and big business to fund housing and essential services is needed everywhere and we must actively spread it. Here in Seattle we will need to immediately take this energy toward winning the release of all arrested protesters without charges, and to defund Seattle police by at least 50 percent, to stop the sweeps of homeless neighbors and fund tiny house villages, to win at least a thousand homes in the Central District for black working families. The struggle for black liberation will also mean campaigning for elected community oversight boards with full powers over the police, including hiring and firing, policies and procedures.

We were clear-eyed about naming the real force pulling the strings: Amazon.  Many argued that we should not “antagonize” big business and instead try to broker a deal, but we know that our power comes from working people getting organized, not from any negotiation with the elite. For those watching from outside Seattle, don’t let anyone tell you in your fight to tax big business in your city that you’re being divisive, because class struggle is what gets the goods.

Not just here and now, but everywhere and always.

Because capitalism is completely incapable of meeting the most basic needs of working people.

Internationally, the working class needs to take the top 500 corporations into democratic public ownership, run by workers, in the interests of human need and the environment, not billionaire greed.

I have a message for Jeff Bezos and his class.

If you attempt again to overturn the Amazon Tax, working people will go all out in the thousands to defeat you.

And we will not stop there.

Because you see, we are fighting for far more than this tax, we are preparing the ground for a different kind of society.

And if you, Jeff Bezos, want to drive that process forward by lashing out against us in our modest demands, then so be it.

Because we are coming for you and your rotten system.

We are coming to dismantle this deeply oppressive, racist, sexist, violent, utterly bankrupt system of capitalism, this police state.

We cannot and will not stop until we overthrow it and replace it with a world based instead on solidarity, genuine democracy, and equality – a socialist world.