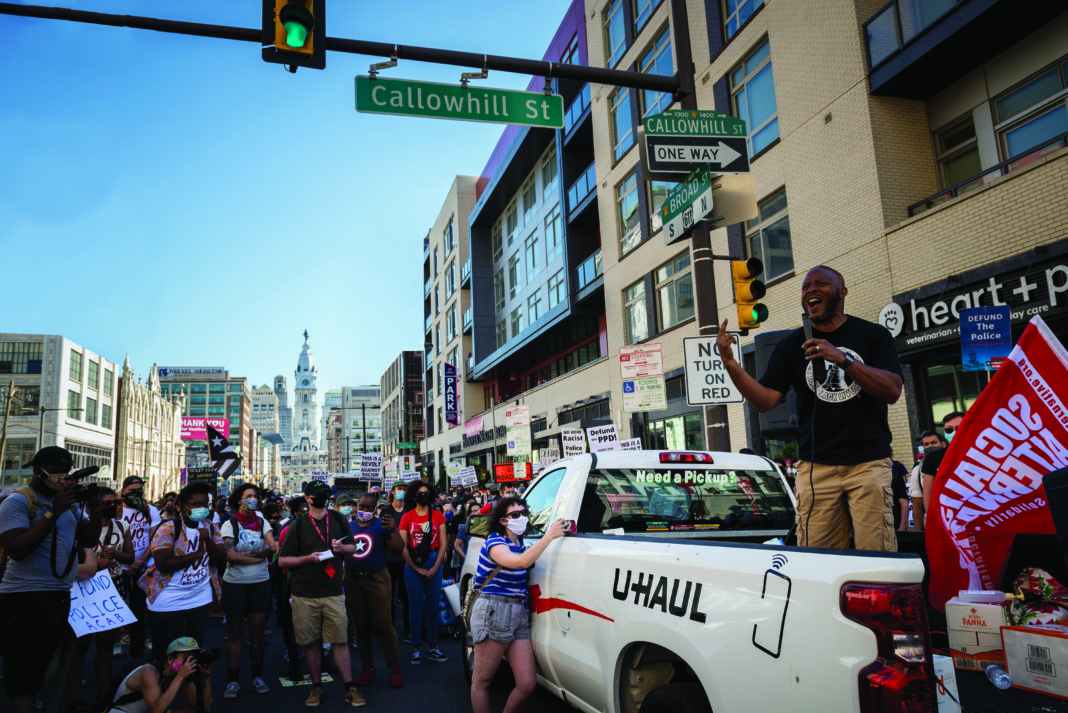 On May 25, four Minneapolis police officers killed a Black man named George Floyd by kneeling on his neck for 8 minutes and 46 seconds. Floyd’s death became the spark that lit the flames of rebellion both in Minneapolis and around the country. Millions of people poured into the streets calling for Justice for George Floyd chanting “Black Lives Matter” and “Defund the Police.” Cities and rural areas alike have seen protests, with the latter in some cases seeing the first protests ever!

In a continuation of the 2019 global revolt against neoliberal capitalism, millions of people have joined protests all over the world in solidarity with #JusticeForGeorgeFloyd. They are also questioning the legacy of colonialism and racism in their own countries. In Belgium, protesters pulled down a statue of King Leopold II, the butcher of the Congo, among other such reckonings.

As we said in early June: “It is clear from a mile away that the rage goes far deeper. It hangs like a cloud over the demonstrations. For many protesters demanding justice for George Floyd, it is obvious that our entire economic and political system is broken.”

The movement has already won the arrest and indictment of all four officers involved in George Floyd’s killing, a ban on police use of chemical weapons and choke holds in some cities and states, and reduced funding for certain local police departments. Despite all these concrete victories, the most significant accomplishment of this movement is the shift in consciousness of ordinary people in an anti-racist direction. Sixty-seven percent of adults across racial lines have expressed support for the protests and the popularity of this movement has put reactionaries in the U.S. like Donald Trump and the leaders of police unions on the back foot.

This sudden burst of struggle wasn’t random. The world is currently in the midst of the COVID-19 pandemic. Millions around the world are infected with the disease. Over 120,000 have died in the United States which became the epicenter of the pandemic. The COVID-19 pandemic was the push that sent the economy off the cliff, plunging it into crisis. Tens of millions of people are currently unemployed or furloughed. Congress was forced to respond with a $2.3 trillion stimulus package. However, the crisis is still here. Federal Reserve Jay Powell said, “Millions of workers will not be able to go to their old jobs.”

These crises have torn through the Black working class. Black people are dying at higher rates from COVID-19, have the highest unemployment rate, and make up a large section of essential workers who hardly have any protection against COVID-19. On top of all this, the epidemic of police brutality has raged on. Black people have been repeatedly harassed and targeted in every city and town in the U.S. It was only a matter of time before the working class responded with revolt.

This mobilization of the multiracial, multigender, working-class youth, headed by young Black people, has shaken this country to its foundations. In 23 states, Democrats and Republicans called in the National Guard to shut down the protests. Trump has touted himself as a “Law and Order” president, threatening to send in the National Guard or even federal troops to cities where he deems that Democrats aren’t effectively crushing the protests.

Protests Explode Out of Lockdown

The #JusticeForGeorgeFloyd protests are a continuation of the Black Lives Matter movement from a few years ago, but have started at a much higher level. They took on the character of an all out rebellion and occupation in some cities. The movement today is more widespread and is starting with demands such as “Defund the Police,” which shows an understanding that the previous reforms were woefully inadequate.

While so-called “riots” were a feature throughout the country, the majority of protests were peaceful. Protestors have rejected violent tactics while also arguing against those who demonized rioters and “looters.” Many quote Martin Luther King, Jr.’s insight that a “Riot is the language of the unheard.” There is a growing recognition among the working class that Black communities are routinely looted by the capitalist system through wage theft, low-pay, little to no health care coverage, and slashes in vital social services.

Young people, activists, and workers see this rebellion as not just being against police brutality. Hundreds of thousands across the country have called to defund the police and redirect money toward social services such as education and housing. Systemic racism in all of its forms is being called out as the target. The slogan, “Enough is Enough,” crystalizes the mood. Many, especially Black youth, are no longer appeased with ineffective police reforms like body cams or implicit bias training. Many are desperate for a complete restructuring of the racist system that plagues working people of color.

While generally the labor leaders have been woefully inactive in this struggle, some local leaderships and rank-and-file groups have launched into action.

In Minneapolis, the bus drivers union ATU Local 1005 denied the police use of their buses to perform mass arrests for the first days of the rebellion. In response to a Minneapolis post office being burnt down, postal workers stood in solidarity with the rebellion by marching with the slogan, “You can replace a post office, but you cannot replace the life of George Floyd.”

Many workplaces, union and non-union, held 9 minute walkouts to honor the death of George Floyd. This growing solidarity between the labor movement and the protests is the basis on which coordinated days of action could be organized. Mass protests combine with workplace actions would bring far more pressure to bear on the ruling class.

No Answers in the Halls of Power

Both the Democratic and Republican Party have been completely taken aback by these rapid developments.

The Democratic Party establishment continues to try to funnel the momentum of this movement into a vote for Biden in November. However, they refuse to acknowledge their own role in police brutality and systemic racism or fundamentally change their positions on mass incarceration and policing.  Joe Biden said that he doesn’t agree with the movement’s main demand of defunding the police. Knowing full well it would not pass in the Senate, the Democrats in the House put forward the boldest police reform package they could come up with. Even their most robust proposals are extremely limited.

The Republican Party, more overtly the party of “Law and Order,” has gleefully ordered militarized forces to descend on protestors. However, they have also had to deal with protests in small towns and suburban communities, which is their voting base. Both parties have made clear their hostility to working-class people taking to the streets for Justice for George Floyd.

Both corporate parties know that they are unable to deliver on the demands of ending systemic racism. To do so would require eliminating the economic order that allows racism to flourish: capitalism. Ending systemic racism would mean working people controlling their communities and workplaces under democratic control — putting the needs of the community over profit. This largely points to the need for socialism to end racism.

Tens of thousands of working people are desperately looking for the way forward in the fight against capitalism and racist policing. Only the working class is the force in society to deliver on these demands by taking control of our workplaces and communities under the nose of the capitalist class.