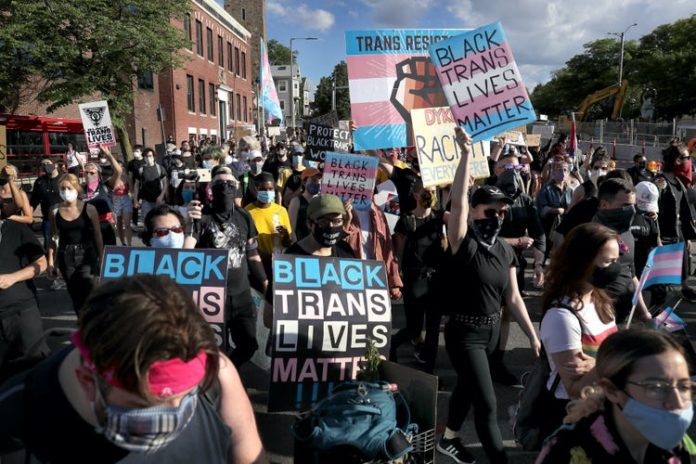 On May 27, while Minneapolis was engulfed in protests and police violence following the murder of George Floyd, Tony McDade of Tallahassee Florida was also murdered by police. McDade was a black transgender man police were pursuing as a suspect in a fatal stabbing. Details surrounding McDade’s murder are unclear. At the time of this writing the identity of the officer involved hasn’t been revealed. A Florida constitutional law that conceals the identity of crime victims is being used as justification to not release the names of the officers who killed McDade, because he allegedly had a weapon. However, likely owing to the strength of the protests around the country, a judge ruled the officer’s name couldn’t be withheld in this instance.

Though not the result of police violence, two other black trans individuals, Dominique Fells in Pennsylvania and Riah Milton in Ohio, were killed in early June. These murders point to a systemic problem related to violence in the US against transgender individuals, with 14 transgender or gender non-conforming people killed so far in 2020.

On June 15, the US Supreme Court ruled that the 1964 Civil Rights Act that bars employment discrimination based on race, religion, national origin and sex also includes sexual orientation and gender identity. While a historic victory, just days before the Trump administration rolled back protections for LGBTQ individuals in healthcare, making discrimination on the basis of sexual orientation and gender identity legal by hospitals, doctors, and health insurance companies. This is especially alarming in the middle of a global pandemic.

Trans and queer lives are still under attack. The deaths of Tony, Dominique, and Riah should not be understood as isolated incidents but as the product of systemic oppression. Capitalism has since its inception used ideas such as racism and queerphobia to otherize and justify the oppression of specific minority groups.

Police claimed McDade was in possession of weapons; however, eyewitness testimonies contradict this, with some witnesses alleging that police fired on McDade without warning immediately upon exiting their vehicles. This shooting is the 3rd police officer involved shooting by the Tallahassee Police Department since December of 2019.

In 2015, the largest survey around transgender issues was published by the National Center for Transgender Equality (NCTE) and found that 20% of black respondents experienced unemployment, double the unemployment rate of the general black population, and that over two-thirds reported feeling unsafe asking police for help. Police are often portrayed in the media as public servants called upon to help or assist people, yet the overwhelming majority of the black trans community has no faith in the police to fill this role and actively fears them. In fact, many trans individuals who have sought out the assistance of law enforcement end up as victims of police violence.

In the case of McDade, eye witnesses directly contradicted police statements but no video of the incident was taken unlike with George Floyd. In Floyd’s case, corporate media had no choice but to cover the criminal police acts due to video evidence, but when cases of police misconduct and violence don’t have video proof, the media downplays them or hides them from public attention to help legitimate police violence. The three-fold factors of McDade being black, trans, and the lack of video nearly guaranteed his murder wouldn’t be covered. It is because of the movement that Tony McDade isn’t another forgotten name, and buried statistic.

Against Racism, Against Queerphobia, Against Capitalism!

Florida has a long history of violence against people of color and LGBTQ individuals, and not just by police. Trayvon Martin was murdered in Sanford in 2012, and this murder helped spark the original Black Lives Matter protests nationally when Martin’s killer, George Zimmerman, was acquitted of the murder in 2013. In nearby Orlando on June 12, 2016, the Pulse Nightclub shooting occurred, in which a man entered the LGBTQ nightclub and killed 49 people and wounded 53 others. These heinous acts were not committed by police but by individuals, and speaks to how ideas of racism and bigotry permeate every layer of American capitalist society. It’s also worth noting that Trump’s reversal of health protections for trans individuals came on June 12th, the anniversary of the Pulse Shooting.

Stories like Tony McDade’s were not considered newsworthy until there was overwhelming pressure through mass protests by working people across the nation and even globally, and there’s no doubt that many stories like theirs continue to go unheard. These protests have also emerged during the covid-19 pandemic, where people of color face increased rates of unemployment, homelessness, poverty and deaths related to the disease. The violence inflicted on trans people as well is not just at the hands of police and transphobic individuals: it is structural and economic. To win the fight for trans lives and black lives will require the mass mobilization of all working class people, and the fight cannot be limited solely to the fight against police violence but must be expanded to a fight for public housing, universal and non discriminatory health care, free and quality education, and an end to climate change. In short: a fight against the entire capitalist system itself!