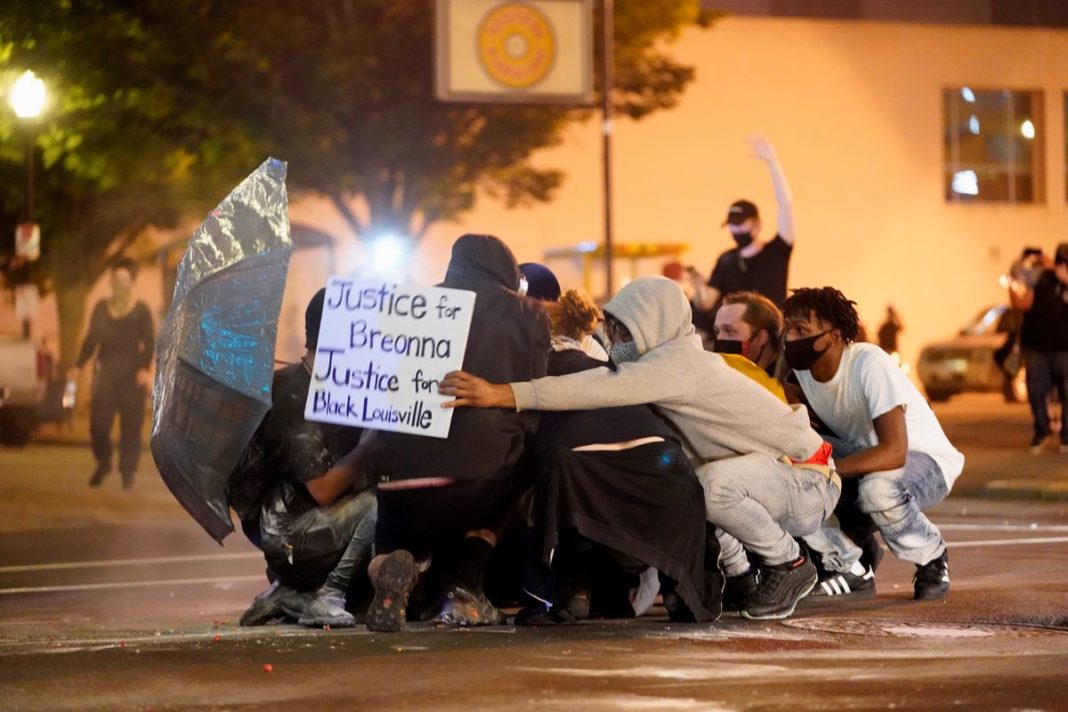 It seems like nowhere is safe or off limits to the over-militarized police force here in the U.S. A 26-year-old Louisville, Kentucky woman named Breonna Taylor was shot eight times and killed in her own home on March 13. According to the police, they were searching for a man with a warrant who lived miles from Breonna’s home, and had already been detained. Breonna Taylor was a frontline worker who had been treating Covid-19 patients in the emergency room. Breonna unfortunately is another name that must be added to the long list of black Americans wrongfully killed by law enforcement.

She was shot eight times after police broke into the home where she and her boyfriend were asleep. That number is beyond excessive and highlights the ridiculous nature of modern day policing, barging into people’s homes with their fingers on the trigger, shooting first and asking questions later.  After witnessing her death, Breonna Taylor’s boyfriend was arrested. He heard the shooting, took out his legally owned gun, and shot back one time hitting an officer in the leg. A 911 recording has him saying, “Somebody kicked in the door and shot my girlfriend.” This plea for help is baffling; it shows how unclear it was that it was actually the police that were in their home.

“No knock” warrants, which were used to bust into Breonna’s home, were created in the 1980s along with other law enforcement policies during President Ronald Reagan’s War on Drugs. Law enforcement agencies have abused this tactic and the numbers prove it. When the policy started in the early ‘80s we saw about 1,500 annually and 30 years later we’re at 45,000 annually, according to the LA Times. Policies like these have shown to be so ineffective. The police often enter homes just like Breonna’s and kill people, even sometimes children die in the crossfire.

The NRA and gun rights activists were ironically silent when this black man was put behind bars for trying to protect his family. These are the same gun activists who came out to support George Zimmerman, the man that killed young Trayvon Martin. The funny thing is, they both were protected under the same type of “stand your ground” law.  How can we rely on a system to properly serve justice when the rules are not implemented fairly? Luckily Breonna’s boyfriend was released some weeks later but the effects of being in jail do not just disappear. He now has to pay rent on a single income and will have been without pay while in jail.

The responsibility for the epidemic of black people being murdered does not just lie at the feet of the police. White supremacists and vigilantes do their fair share. For example, Ahmaud Arbery was shot and killed in Georgia by a father and son that were previously photographed at Klan rallies. Arbery and George Floyd’s death were both recorded on video but if they weren’t, would we even know? Thankfully with the help of social media, the public outcry can attempt to force prosecution proceedings to take place.

One interesting piece of these three deaths is that two of them got much more national attention than the other. Two of them were recorded. Two of them were men. There is something to be said about justified outrage of a video of what many Americans envision as true racism; the modern day lynching of a black man. But we need to acknowledge that so many thousands of people are killed by police where there is no video. Nothing to watch and prove just how terrible and unfair it all is. There is something about seeing the video that makes it more real.

Similarly to George Floyd’s murderer, one of the officers involved in the killing of Breonna Taylor also worked security at one of the local night spots. A few weeks after her death was reported, others came out about the corrupt and abusive actions of Officer Brett Hankison. Two women reported sexual assault after he gave them rides home, in his police vehicle. Another man filed federal lawsuit against him for planting evidence to lead to arrests. We are seeing how officers are involved with multiple complaints over assault, corruption, and brutality. Why are they able to keep their badges? Police should be used for public safety, and yet they are the ones creating the violence!

What is worse are the reports. Just like we cannot rely on cops to be honest with the use of body cameras, we cannot rely on them to be honest about what happens when they kill someone. The report of Breonna’s murder is utterly ridiculous in that there are huge discrepancies and missing information. The report lies about how the police entered her home and left blank her address and DOB which is widely known information. The movement celebrated her birthday on June 5 with vigils and rallies.

Louisville city council has voted unanimously to ban “no-knock” warrants going forward and called the new legislation “Breonna’s Law.” This is, of course, a victory and shows that movement building is what brings change. Would this have happened if we hadn’t seen the largest gathering of protestors in decades? We must use the momentum of victories like this to continue the fight for stronger gains, and we can’t stop there either!