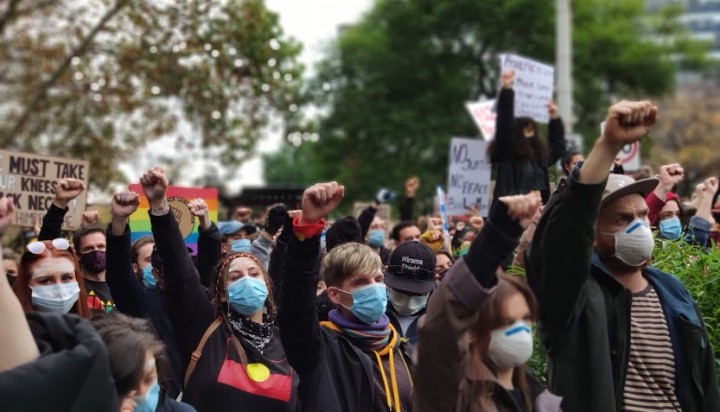 Hundreds of thousands of people turned out to protests around Australia in support of the Black Lives Matter movement on June 6. Angry, youthful rallies took place in Sydney, Melbourne, Brisbane, Adelaide, Canberra, Hobart and a number of regional centers, while 2000 marched in Perth earlier in the week.

Although sparked by the murder of George Floyd in the United States, the massive echo in Australia called attention to systemic racism at home. First Nations people in Australia are incarcerated at a higher rate than black Americans, the highest in the world. Indigenous deaths in state custody featured prominently among an outpouring of anger, grief and solidarity.

Across the continent, relatives of David Dungay Jr, Tanya Day and others who have died in custody spoke out about their battles for justice. Since the 1991 Royal Commission into Aboriginal Deaths in Custody, over 430 deaths have been recorded without a single conviction.

Aboriginal people were not the only community to highlight their struggles against discrimination and state violence. African-Australians, who have been subjected to racist scaremongering about “gang” activity, made up a significant part of the crowd in some cities. Other marginalized groups — such as activists from West Papua, who spoke out against their genocide at the Melbourne rally — also took part.

A sense of internationalism, that these struggles are connected to a global movement for a different society, could be deeply felt. Efforts by the authorities to stop the demonstrations from going ahead only provoked greater numbers and a mood of defiance.

Just days after a viral video showed a Sydney cop slamming an Aboriginal teenager face-first to the ground, the New South Wales Supreme Court granted a request by Premier Gladys Berijiklian and NSW Police to have the Sydney rally banned. The court’s ban was overturned on appeal at the last minute when a huge crowd began to arrive anyway.

Many people saw through the hypocrisy of politicians who said that protesting posed an unacceptable risk of COVID-19 transmission when these same politicians are rushing to reopen schools, sporting venues and shopping centers.

Home-made signs with slogans like “racism is a pandemic” and “the right to protest is an essential service” highlighted why so many thought it was important to attend. Organizers distributed masks and sanitizer and urged social distancing as much as possible to limit the risk.

Socialist Action members were present in solidarity at the Melbourne, Sydney and Brisbane protests. Our material, adapted from leaflets used by our sister section in the US, aimed to highlight how racism and police violence stem from the capitalist system that relies on them. We received a positive enthusiastic reception to our call for people to get organized to fight for a socialist alternative.

The day ended with a sobering reminder of why we were there. While the protests were underway, a 40-year-old Aboriginal man died in custody in Western Australia.

Later that night, Sydney police trapped protesters underground in Central Station and attacked them unprovoked with pepper spray. This attack, causing people to violently cough and retch, showed how hollow the establishment’s “concerns” about Coronavirus transmission really were.

The protests of June 6 were an inspiring show of strength by a movement that refuses to be intimidated. Ted Wilkes, a Nyungar man from Western Australia speaking in Melbourne, summed up the mood: “We’re the start of the revolution.”