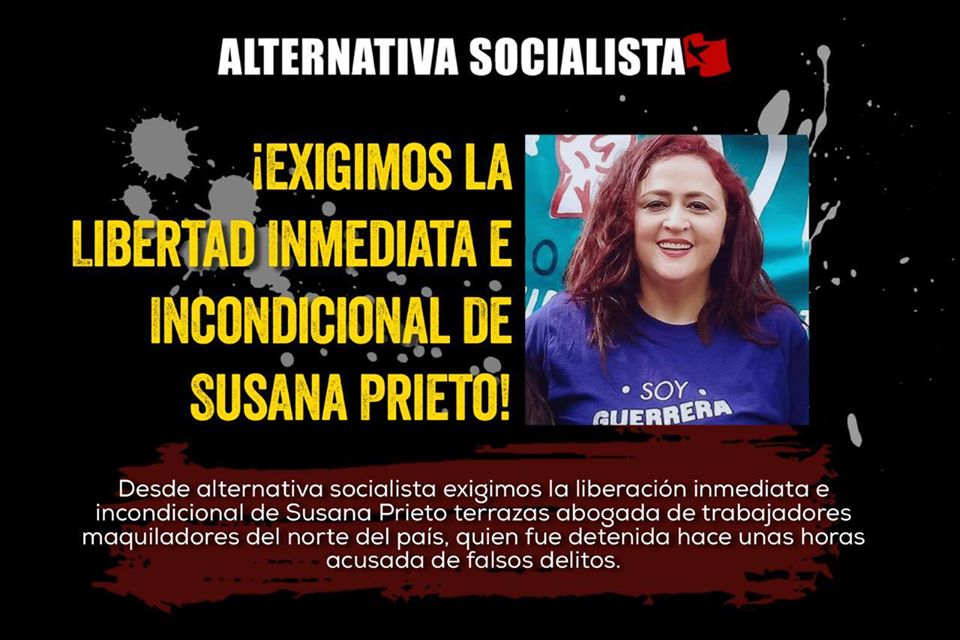 Defending workers’ rights is not a crime!

On Thursday, June 8, Susana Prierto, the “maquiladora” (industries in the special economic zone around the Mexican/U.S. border) workers’ lawyer and legal adviser to the National Independent Union of Workers of Industries and Services, was arrested in Matamoros, Tamaulipas. At around 5:00pm, after the government of that state issued an order against her, agents arrested her under a warrant issued by Rosalía Gómez Guerra, falsely accusing her of mutiny, threats, coercion and crimes committed against public servants.

Susana is a lawyer for thousands of maquiladora workers, who since 2019 has fought for the defense of their labor rights, most notably in the “20/30” movement (demanding a 20% wage increase and a one-off 30,000 peso payment) which denounced the criminal ways that companies in northern Mexico exploit workers. Since then, Susana has been harassed and threatened by various local and federal authorities, private companies and reactionary leaders.

This arrest occurs in the context of the struggle of the maquila workers against the murderous employers, who have exposed workers to the Covid-19 pandemic. Non-compliance with sanitary measures and the Quarantine by employers has killed dozens of workers. It is clear that both state Governor, Francisco García Cabeza de Vaca, and the bourgeoisie thus intend to intimidate workers and force them into submitting to the bosses’ directives.

Alternativa Socialista demands the immediate and unconditional release of Susana Prieto Terrazas, accused of false crimes with the intention of intimidating and demobilizing the workers.

Defending of workers’ rights is not a crime!