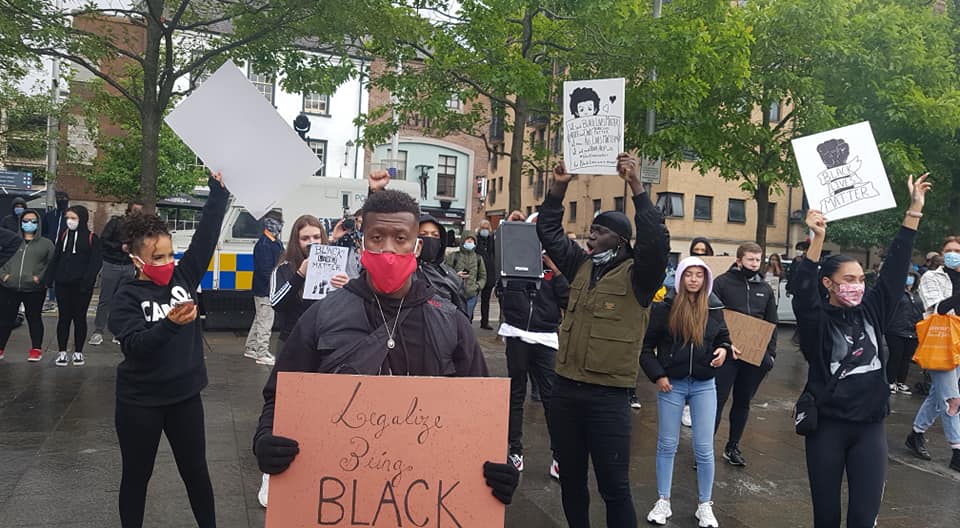 Defend the democratic right to protest!

On Saturday, June 6, thousands of people gathered at Black Lives Matter rallies in Belfast and Derry. They did so to stand in solidarity with the revolt taking place across the US in the wake of the horrific and racist murder of George Floyd by police in Minneapolis, but also in opposition to racism at home. Rightly, people of color were to the fore in these youthful, angry but peaceful protests. At both locations, protesters took to their knees in silence for 8 minutes and 46 seconds, representing the length of time Officer Derek Chauvin knelt on George Floyd’s neck, leading to his death.

Those who took part did so despite provocative police harassment. In the days leading up to the protests, the Police Service of Northern Ireland (PSNI) issued threats of fines and court appearances for breaking Covid-19 regulations. This led to protests in Omagh, Newry and Portadown being formally cancelled, although small and socially-distanced gatherings did go ahead. Protest organizers were visited at home and cautioned. Checkpoints were set up and public transport hubs were policed to prevent people attending.

On Saturday itself, it was the police and not protesters who acted irresponsibly in the context of the pandemic. Undoubtedly, many people will have had genuine concerns, but the protests were very well organized. Spaces two meters apart were marked for people to stand; stewards ensured that distancing was maintained; all attendees were encouraged to wear masks and gloves, and PPE was made available at the protests.

In contrast, police officers – often without masks – invaded people’s personal space to threaten and to issue fines, and also served to create bottlenecks of people where distancing became impossible. As well as threatening organizers with prosecution, police also appeared particularly to target young people and people of color for fines and harassment.

One rule for the rich, another for the rest

The treatment of anti-racist protesters at the hands of the state stands in stark contrast to that of bosses who force workers and others into unsafe conditions on a daily basis. The meat processing industry has seen clusters of infections in many plants due to management putting profit over health and safety, with one worker tragically losing her life – no prosecutions. Owners of private care homes have bungled infection control, leading to needless loss of life – no prosecutions. Long queues with no effective social distancing outside IKEA, for example, have drawn little concern or condemnation from the police or politicians. Yet, when people voluntarily come together to protest in a responsible manner, they are met with harassment and repression.

Minister for the Economy Diane Dodds has criticized the protests, saying people need to “act responsibly.” Yet, at the same time, she has called for social distancing guidelines to be reduced to one meter in order to facilitate the reopening of the hospitality industry at the behest of the bosses! Will they be fined and prosecuted if they fail to stick to the regulations? We doubt it. The Northern Ireland Executive is subservient to big business. It has allowed non-essential businesses to continue to operate throughout lockdown, and shirked any responsibility to enforce health and safety in the workplace.

All the main parties at Stormont – whether Orange, Green or “neither” – support the capitalist system and believe that society must be run in the interests of private profit. They are hostile to workers and young people organizing and acting independently, particularly when they do so across the sectarian divide, as was the case with these protests. As they consider new attacks on the living standards and rights of ordinary people in the wake of this crisis – including pay freezes, job cuts, rates hikes, and restrictions on abortion rights – they aim to stamp out the threat of protest and civil disobedience.

As Marxists argue, the fundamental role of the police, the judiciary and the other institutions of the capitalist state is to defend the interests of big business, the super-rich, and the system itself. The capitalist system also creates the poverty and alienation in which racism, sectarianism and other forms of bigotry breed, which are then consciously fostered by the establishment to keep us divided.

Thousands of pounds have already been raised through crowd-funding to support those fined at today’s protests. That is an important act of solidarity. We must stand together to demand that charges against protest organizers are dropped, as well as the fines. This may require further socially-distanced mobilizations. The right to protest is of fundamental importance to the ability of workers and young people to defend our rights and living standards, including to put pressure on bosses and politicians over health and safety in the midst of this pandemic. We call on the trade union movement – representing almost 250,000 workers here – to put itself at the forefront of this fight for democratic rights.

Fight back against this rotten system

The Covid-19 crisis, the looming economic catastrophe, climate change and the shock waves following George Floyd’s murder all highlight the reality that capitalism does not offer a future worthy of the name for the majority of people on this planet. People of color are choked to death by police brutality, but also by the effects of poverty, climate catastrophe and exploitation.

The Socialist Party is part of International Socialist Alternative, building a global fightback against this entire rotten and racist system. We stand for a socialist future, run by and for the working class, where society’s wealth would be used in a planned an democratic way in the interests of people and planet, not billionaires. If you agree with our ideas, get in touch today and find out how you can get involved.