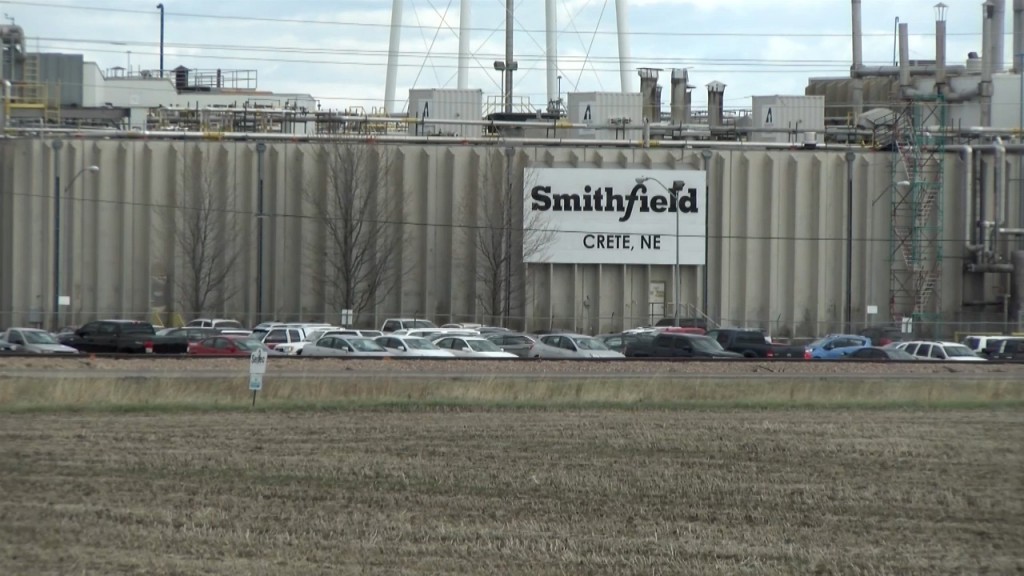 Another food industry watchdog, the Midwest Center for Investigative Reporting has found that “By the time it closed its doors on April 12, Smithfield’s Sioux Falls plant had more than 200 confirmed cases of COVID-19. In the days since then, the case count has swelled to nearly 900, including workers and those they’ve interacted with, making it the biggest single cluster of COVID-19 infections in the nation.”

Since the middle of March, it has become clear that meatpacking plants, along with acute care hospitals, nursing homes and prisons, are the workplaces most likely to incubate and spread the coronavirus, COVID-19. Unlike those facilities, meat plants were already some of the most dangerous places to work in America.

Meat plants are cold, noisy places where, when workers need to communicate with each other, they have to get close and shout in each others’ faces. Ventilation systems keep the air constantly in motion between them and the effects of this on the virus in the air is still being studied. The work is physically hard, workers are sweating despite the refrigerated temperatures, eye protection gets steamed up and masks become soaked with bodily fluids from the meat which is being sprayed with water and cleaning fluids throughout the production process. As many media images have shown, workers on the deconstruction lines stand, literally, shoulder to shoulder with absolutely no physical distancing. A minimal six feet of physical distancing would mean doubling or tripling the size of each workstation. That would mean either reconfiguring or rebuilding these massive meat factories and, until that’s done, it would mean laying off something like half the workforce.

Instead of trying to address these serious health risks to workers and their families, Trump and the governors of most rural states, at the behest of the meatpacking companies, are ordering these plants to reopen as “essential infrastructure.” These are orders which the industry wants to protect it from lawsuits and from paying for benefits for laid off workers.

The slaughterhouse industry employs half a million people. Meat accounts for more than 5% of the U.S. economy, making it roughly equal in size to auto manufacturing.  From the post-WWII strike wave until the late 1970s, slaughterhouse work provided family-supporting wages for millions of workers.

The Condition of Unions in Meatpacking

High wages and quality benefits were ended by the neoliberal assault on workers’ rights which began after the 1973-5 recession which ended the postwar boom. During this assault the once militant, multiracial, CIO-affiliated United Packinghouse Workers of America was forced into a merger with the business-friendly Amalgamated Meat Cutters and later into a 1.3-million-member mega-union, the United Food and Commercial Workers. But although the UFCW represents roughly 65% of workers in beef and pork packinghouses, it has failed to defend workers’ living standards during the forty-year period of its existence.

Good unions protect more than wages. A strong union is every worker’s best defense against unsafe and unhealthy working conditions, and there is a direct correlation between the attacks on meat plant unions and the ramping up of employee injuries. The strong union contracts of the 1940s to the early 1980s included employer-provided health insurance, paid sick, holiday, and vacation time, paid time to change into work clothing on arrival at the plant, allowances for safety gear and for the employer to provide laundry services for work clothes. Further mass struggles in the 1960s and ‘70s resulted in the creation of the workplace safety agency OSHA and of stricter inspections by government agencies like the USDA and FDA.

But concurrent with the attacks on unions beginning in the 70s and continuing to this day have been the erosion of these regulatory agencies, aided by a revolving door between highly paid industry managers and the political appointees who head the agencies. Today, vast numbers of slaughterhouse workers are working under dangerous conditions and working sick, and this was the case long before the coronavirus exposed it to public view.

A 2016 Government Accountability Office report noted that meat and poultry workers experienced illness rates that are officially four times higher than other manufacturing workers — nearly 160 cases per 10,000 full-time meat and poultry workers in 2013, compared to about 40 cases for manufacturing overall. But the real rates are likely higher, the report said, because both workers and their employers are known to underreport injuries and illnesses. Workers fear losing their jobs, and the employers simply lie without consequence.

Across the meat industry but especially in poultry plants, particularly in the South where the union is weakest, corporations have gone out of their way to hire immigrant workers, with a clear preference for workers whose rights are on a knife edge because they are undocumented or refugees. Meatpackers were using this tactic in the Chicago stockyards a hundred years ago as noted in the socialist novel “The Jungle.”

Today it is again standard throughout the industry, from the big four corporations that control almost 80% of production down to boutique startups like Case Farms, which has one of the worst safety records in an industry where workers are already three times more likely to suffer serious injury than the average American worker. Workers cutting up pork and beef carcasses are nearly seven times more likely to suffer repetitive strain injuries.

Today, meatpacking is built around the concept of “just in time” processing. The least interruption can cause massive disruption, as we saw in the mass culling of millions of hogs and chickens that was forced by the shutdowns of a handful of plants following COVID-19 outbreaks in April. The inhumane methods of mass factory farming leave no slack in the system; slaughterhouses are designed for carcasses of a certain size, and hogs on factory-farm diets that cannot be delivered on time have to be slaughtered before they grow too large. These inhumane methods go beyond the scope of this article but are a sharp indication of the effect that strikes in this industry would have. A national strike across the meatpacking industry would have an immediate impact on the U.S. economy.

Two-thirds of the workers in beef and pork and a significant portion of poultry processing workers are organized in a single union, the United Food and Commercial Workers or UFCW and its affiliate the RWDSU. Walkouts have already occurred, such as in Crete, Nebraska where 50 workers walked off the job when they were told that Smithfield Foods had reversed a decision to close the plant for deep cleaning after an unknown number of workers had tested positive. These were members of the UFCW, Local 293 but their local union president denied any involvement with it and does not even appear to have gone to the plant himself to support them or even to negotiate the terms of their return to work,telling local media instead that “the leaders of the walkout went back inside and sat down to talk with managers. The main thing is they’re scared,” he said. “Yesterday, they were told, ‘Smithfield was worried about you guys so we’re going to shut down and do some deep cleaning.’ And then when they changed it today, people kind of freaked out, thinking ‘profits in front of people.’”

Defenders of the union’s hands-off stance may claim that the union’s arm’s length approach protects it from potential fines for sanctioning a wildcat strike, but it’s clearly hypocritical for the union to put its treasury before the lives of its members. Neither does this argument hold up from a legal standpoint; collectively refusing to work in unsafe conditions is protected under both labor law and OSHA regulations.

Sustained job actions are a necessity to win the massive changes that are needed to protect workers’ lives, and if posed in this way would receive widespread support, just as health and safety measures generally are supported by the vast majority of working and middle class people. As noted above, the impact on the profits of the meatpackers, and on the economy, would be immediate and could inspire widespread strikes against the premature reopening of particular sectors.

Can’t Depend on OSHA, the CDC or the Government

Months into the crisis, OSHA has refused to create new standards to keep meat plant workers safe, claiming that protecting workers from the pandemic can be left up to the employers.

The CDC, meanwhile, has written a report, “COVID-19 Among Workers in Meat and Poultry Processing Facilities” that proposes no solutions. Although they point out that the overcrowded living conditions and packed company buses that these low-paid workers rely on are a contributing factor in the growth of coronavirus hotspots, the report – written by a huge panel of 69 experts – is silent on what it would take to fix these issues. Predictably, corporate politicians like Trump’s Health and Human Services Secretary Alex Azar have used these crowded conditions to make racist, victim-blaming attacks on the workers who, as noted above, are selected by the employers from refugee and undocumented populations precisely so that they can be more readily exploited (Politico, 5/7/2020).

The union should demand not only safe distancing and PPE on the job but also safe transportation and affordable, safe housing for meatpacking workers and their families. The union leaders’ failure to take action points toward the need for a democratic, rank-and-file movement to take control of this massive union in the interests of the membership as a whole, electing workers’ representatives who live on a workers wage and are prepared to lead their members in a determined struggle for restored living standards and health and safety measures determined by the workers whose lives depend on it.