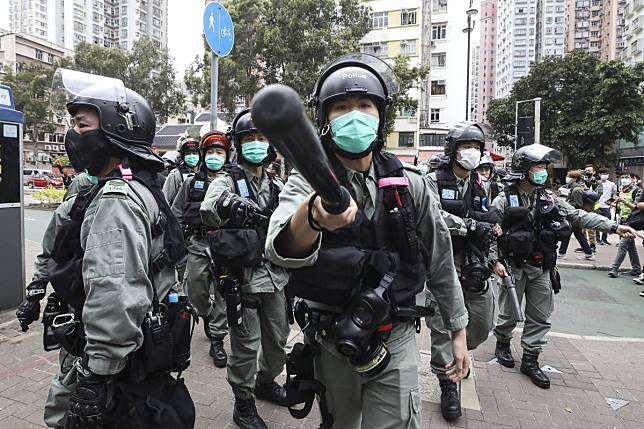 Per Olsson of Offensiv (ISA’s weekly newspaper in Sweden) asked Dikang of Socialist Action in Hong Kong about the recent dramatic events there.

Per Olsson (interviewer from Ofensiv): The new national security law for Hong Kong seems to be a game changer; do you think it will provoke a protest movement even bigger than last year? What steps are needed in the view of Socialist Action, to galvanize the present movement and build a movement that can defeat this new draconian law?

Dikang: The law marks the end of Hong Kong’s partial autonomy. In practice, the Chinese dictatorship can now target whichever opposition groups it wants, as it does in mainland China. It doesn’t need to follow local laws, but can change these laws to fit the situation. Its aim is to smash the democracy struggle in Hong Kong.

Whether a huge protest movement now emerges depends on many factors. The situation is very complicated. The dictatorship is exploiting the pandemic, gatherings of more than eight people are banned for health reasons and people are more wary of large crowds. Actually, most demonstrations were banned in Hong Kong already last year, from October onwards. So any protests now are illegal and the police are more prepared and have more sophisticated tactics to quickly break up protests.

There is huge anger in society. An online poll of 370,000 people found 98.6 percent oppose the new law. Seventy percent said it would have no effect on anti-government protests. The mood is that this is now the “final battle” and there is nothing to lose. But there is also frustration that after last year’s gigantic movement, with one in four people on the streets, up to two million on occasion, and such fierce resistance, the dictatorship has not shifted. It resorts to even greater repression. Addressing the shortcomings — tactically and in terms of program and orientation — this has been the main focus of Socialist Action’s engagement in the movement.

The movement can win if it adopts working class methods, builds workers’ organizations like trade unions, and links the need for democratic rights with the need for urgent economic and social change to liberate us from collapsing capitalism. The most important ingredient for a victorious movement is to win support from workers in mainland China and also globally. The current Hong Kong protests can’t do that, because unfortunately they are too inward looking — they don’t see the incredible potential of the Chinese masses. So — and this can be done — the struggle has to re-invent itself, change direction, in order to win.

The “Emperor” Xi Jinping is facing historical crises, and yet the regime seems determined to push through this new law and end Hong Kong’s special kind of autonomy. What are the main reasons? Why is the regime, given all the risks involved, prepared to put an end to the “one country, two system” policy?

It shows how deep the crisis in China has become. This was already taking place before the pandemic. The pandemic has fast-forwarded processes, internationally and in China. The economy has been slowing for several years; the GDP figures were manicured, a few points added here or there, to make them look better. The US-China trade war has taken a big toll and really alarmed Beijing that the US wants to place it in geopolitical quarantine. Hong Kong last year and also Taiwan were disastrous developments from Beijing’s perspective — they are losing control.

So, despite the significant dangers and costs arising from the new law, which effectively means taking direct control over Hong Kong, breaking all kinds of promises made in the past, the dictatorship feels it has no choice. It would rather face these new costs and dangers than lose control. Having said that, we don’t think this will succeed. The dictatorship is sitting on a social, political and economic time bomb. It can take short-term measures that appear to bolster its rule, but these are increasingly backfiring and creating even bigger problems further ahead.

This is what happened with Beijing’s stimulus packages after the 2008–9 Great Recession. It seemed to be a very bold and decisive action. But it helped tip their debt problems over the edge and it is noticeable today that China is being very frugal with its stimulus during the corona crisis. The US, Germany, Japan and France have launched unprecedented stimulus measures of more than 10 percent of their respective GDP. China’s measures so far are only 2.6 percent of GDP.

The national security law will have huge implications globally. How will it affect the new China-US Cold War? Will there be new tariffs and sanctions?

Sanctions by the US are very likely. Presumably they will at least suspend the 1992 US legislation that grants Hong Kong special trade status. It will then become just another Chinese city in trade terms.

Although we don’t know yet, the EU may follow suit. The EU and especially Germany has previously tried to balance in the US-China conflict, to put its own economic interests first, but now most Western governments are lining up in a rather loose and internally conflicted anti-China bloc. This is not just over Hong Kong but also other issues like Huawei and technology. They are blocking Chinese companies from taking over companies in the EU. The pandemic has pushed other capitalist governments closer to the US position that China needs to be contained, pushed back. Historically such imperialist conflicts have usually led to war. This time it is economic warfare.

Even Australia, which counts China as its biggest export market by far, has clashed with Beijing over Canberra’s calls for an independent investigation into the coronavirus outbreak. The Chinese regime has retaliated by hitting Australia’s barley and beef imports.

Probably Xi Jinping and the ruling group underestimated the scale of the retaliation coming over Hong Kong. Trump by instinct doesn’t care about Hong Kong; he doesn’t care about democratic rights, obviously. But his re-election campaign is in crisis with the pandemic, which has now killed almost as many Americans as died in World War I. So, he will feel pressure to show he is “tough” against China.

What will be the implications in Asia, for China’s relations with its neighboring countries? Could the US even use this to push Taiwan’s global status? Will the actions taken by the West get support in Hong Kong? Will there be even bigger illusions in the West now?

China will try to cushion itself against the Western backlash by speeding up its attempt to build an Asian trading bloc, the RCEP, and also looking to expand the Belt and Road Initiative (BRI). But there is a world of contradictions in both these enterprises. The Belt and Road is now in big trouble because of the pandemic and global slump, which has exacerbated the global debt crisis China is the biggest lender to poor countries, with loans accounting for six percent of global GDP. Many of these loans are linked to BRI projects and there will be a growing clamor from Africa and Asia for debt write-offs.

Inside China this will inflame the regime power struggle. There is considerable internal opposition to the Belt and Road as a waste of money. It’s very sensitive because the BRI is Xi’s baby — he made it a prestige issue and now it’s not easy for him to downsize let alone abandon it.

Taiwan has become a crucial “chess piece” in the US-China conflict. This is also a blot on Xi’s copybook, because people compare how his predecessor Hu Jintao managed the Taiwan relationship and Hu’s record looks better than Xi’s. Xi’s approach — bullying and threats that make him look strong at home — has disastrously backfired in Taiwan.

President Tsai Ing-wen, who was recently re-elected on an anti-Xi, anti-China platform, commands 70 percent support in opinion polls. The pandemic of course didn’t help Beijing win any friends in Taiwan and the crackdown in Hong Kong is almost an admission by the dictatorship that Taiwan is for now a lost cause.

In Hong Kong illusions in the US, Taiwan, and the West will inevitably increase. It’s a sign that despite anger and hatred of the Chinese dictatorship people feel the mass struggle cannot win. So they are looking for outside help. This is also something we’ve seen before in other conflicts — the Kurds and Palestinians at different times had illusions the US would support them. They were always betrayed because US imperialism exploits these issues to further its own global aims. The people of Hong Kong, Taiwan, Kurdistan, Ukraine — all are seen as dispensable.

What in the view of Socialist Action should be the response from the working class movement internationally? What kind of global solidarity is needed?

International acts of solidarity can have a very powerful effect. They can encourage but also open the eyes of the Hong Kong mass movement about which forces around the world can and can’t be trusted. The mass protests in the US over police violence, racism, and the killing of George Floyd show that Trump speaks exactly like Xi Jinping when facing protests in his own backyard. He slams the protesters as “terrorists” and defends the police violence in the same words we have heard from the Chinese dictatorship and Hong Kong’s leader Carrie Lam.

Shamefully some sections of the Hong Kong localists (pro-independence) support Trump and the National Guard against the current mass protests in the US. Their hatred of the Chinese dictatorship has blinded them to the truth — that the struggle against state violence should unite the masses in the US, Hong Kong and China.

The trade unions in the West should do more to protest against China’s repression in Hong Kong, Xinjiang and against Chinese workers’ strikes. There is a very real problem in the trade union movement in many Western countries of a layer of “left” activists and officials who refuse to criticize the Chinese regime and are influenced by its propaganda that the Hong Kong protests are pro-American. Unfortunately there is not much awareness about what is really happening in China and Hong Kong. So if a union bureaucrat dismisses a proposal to send solidarity to the Hong Kong protests, or striking Chinese workers, arguing these are “pro-imperialist” movements, often there are few people with the facts and arguments to counter this. ISA members have a crucial job of education to do, as this problem can become more entrenched as the new Cold War unfolds.

It is the false logic that says, “my enemy’s enemy is my friend”. But no matter how much Trump or Boris Johnson are the enemy of workers in their own countries, which they obviously are, this doesn’t make Xi Jinping a friend of the working class. His regime is not one ounce progressive; it has presided over an even greater shift of society’s wealth into the hands of the super-rich in China than is the case in the US and Europe.

So what’s necessary today is active solidarity and education, to revive the best internationalist traditions of the working class movement, to re-emphasize why workers need to always speak and act independently from capitalist governments and politicians. Grassroots working class solidarity against state violence, authoritarian policies, and anti-working class rulers, this is what’s needed.