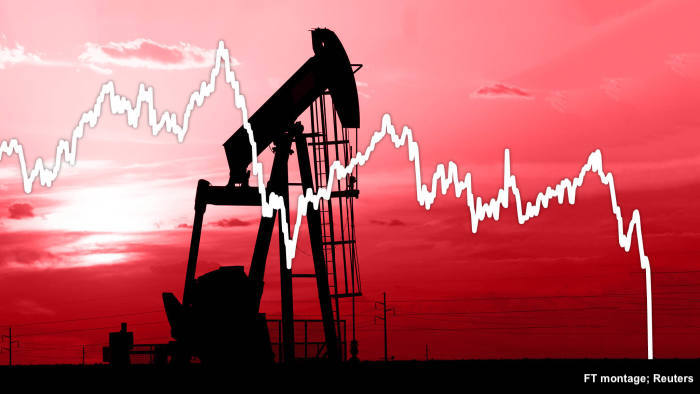 The collapse in oil prices in the second quarter of 2020 will be a further accelerator of the deepening world economic depression.

The New York Times writes: “Just a few months ago, the American oil industry was triumphant in its quest for energy Independence, having turned the United States into the world’s biggest petroleum producer for the first time in decades. But that exhilaration has given way to despair as the coronavirus has kneecapped the economy, destroying demand for gasoline, diesel and jet fuel as cars sit parked in driveways and planes are consigned to remote fields and runways.” [4/21/2020]

At present, there is a global oversupply around 30 million barrels a day. Refineries and storage tank hubs are all filled up. 300 million barrels of oil are floating in ocean tankers looking to unload their product somewhere. These are some of the direct reasons why the price of West Texas Intermediate (WTI) oil recently dropped to -$37 a barrel recently. At the time of writing it is around $20 a barrel.

The failure of the capitalism to repair the economy after the 2008 recession, despite the massive bank bailouts, has set up this new depression. The economy was already slowing down in the last 18 months in most sections of the world when it was then further upended by the pandemic, with an estimated 40% of the population globally advised to stay home and an especially acute collapse in air travel. As a result, global consumption of oil has fallen from 100 to 85 million barrels a day.

The Price Collapse of Oil

Oil companies are cutting back drastically. The US oil giants, ExxonMobil and Chevron, have begun to slash production and spending. Exxon will cut planned spending by 30% or $10bn (£8.1bn) this year, while Chevron will cut spending by a fifth, or $4bn, compared with last year. This reflects the poor outlook for the industry.

This collapse in the oil market will have particularly devastating consequences for oil producing countries in Latin America, the Middle East, and Africa whose economies were built around export of oil to world markets. In Iraq, 90% of government income comes from sales of oil. In Saudi Arabia, despite the fact that their break-even point is very low, their whole society is based on the price of oil being close to $100 a barrel. Countries like Mexico, Venezuela, Ecuador, and Nigeria etc. will be convulsed by the collapse of their national income. This is coming in the wake of the huge wave of protests in 2019 around the world, including in many oil producing countries. The collapse in the price of oil will lead to new explosive events including political challenges in many countries.

Implications for an Already Faltering Economy

The US oil industry is reeling, with the slashing of production resulting in massive lay-offs. Experts say that any price below $40 a barrel is devastating to US oil producers. But the oil crisis will also send new shock waves through the rest of the economy.

The oil industry has been a source of hugely speculative investment. In the last 18 years, the largest issues of junk bonds on Wall Street have been to US energy companies. Stocks of energy companies have already fallen 60% this year. According to Moody’s, oil production and exploration companies hold $56 billion in debt which is due to be paid back between 2020 and 2024. Pipeline companies have $123 billion dollars in similar debt.

The New York Times writes. “Wall Street supercharged America’s energy boom of the last decade by making it easy for all companies to finance growth with cheap borrowed money. Now that partnership is in tatters as the coronavirus pandemic has driven the fastest collapse of oil prices in more than a generation.” [3/20/20] Ed Hirs, an energy economics lecturer at the University of Houston says “the Shale players were already stretched to their limits, and the virus has just broken every thread they were holding on by.”

It is unlikely that the situation will turn around quickly due to the collapse in demand from reduced tourism, travel and broken supply chains.

Bankruptcies in the oil industry will spread to financial markets, which issued junk bonds on the expectation of huge payoffs from the oil industry. The oil industry in the US directly and indirectly employs close to 10 million people. This will be a further shock and drag on the financial system and the whole economy which is already collapsing into a depression.

The continuing pandemic has caused a collapse in demand in tourism and travel in general. There is a clear overcapacity in oil. It will take some time for the industry to cut back its excess of production, since many national states rely on the sale of oil. Oil production companies in the US, particularly shale producers, are going bankrupt. But we can expect the US oil industry to consolidate around the largest producers and be ready to emerge again when demand starts to match supply.

The collapse of oil prices contributes to deflation, which is a massive threat to the economy, by stifling spending. For example, commodity prices fell by 37% between February 20 and March 20; metal and energy prices fell by 55%. Economic experts are predicting a fall of up to 30% in the US economy and a major decline in most major countries in the second quarter.

Also, a huge debt bubble has grown up in the last decade. Total global debt is now at a record level of $253 trillion. This will be the next crisis to clobber the economy as bankruptcies start to spread through the economy.

Desmond Lachman of the American Enterprise Institute writes, “The coronavirus epidemic is triggering other economic crises in its wake,” Among those crises is “the bursting of a global asset price bubble . . . a global credit crunch, and a major reversal of capital flows to the emerging market economies.” [4/3/20]

Falling prices and lack of demand from workers who are laid off, or fear for their future, will discourage corporations to invest. Combined with the broader crisis of overproduction and over-capacity in the world economy, this can lead to a freeze in investment spending and the taking of any risks as money in the bank is considered safer than other economic alternatives.

In a recent article in Foreignpolicy.com, Trevor Jackson writes: “Deflation depresses demand by encouraging consumers to delay their spending, especially on infrequent big-ticket purchases like cars and appliances. In a deflationary environment, consumers expect prices to fall, so they wait on their purchases. That, in turn, creates a dangerous feedback loop: When consumers don’t buy, producers are likely to lower their prices, which confirms consumers’ expectations, so they wait longer, which drives down prices further, and so on, all while nobody buys anything. Sales dry up, so profits dry up, and businesses go under.” [4/29/20] Also, deflation will make it harder to pay off debts including those owed by poor countries to international banks.

Deflation was the curse of the great depression from 1929 to 1939. It has also plagued the Japanese economy for the last two decades. The Washington Post writes: “The Great Depression provides evidence of deflation’s damaging effects. Agricultural prices collapsed, making it harder for farmers to pay their debts. Mortgages went into default by the thousands. Prices fell more than wages, raising labor costs and frustrating firms’ efforts to resume production. Idle workers and idle machines pushed prices down, delaying the recovery.” [4/5/20]

Monetary policy, i.e. shoveling money into the banks and financial system, will not overcome a crisis rooted in deflation and lack of demand. It will only just prop up the banks. Only creating real demand will work. Even policies like Roosevelt’s New Deal policies in the mid-1930s only gave a temporary boost to the economy, which collapsed again in 1937. It was only the ramping up of military production in preparation for the US’s entry into World War II that ended the Great Depression.

While the immediate triggers for this crisis have been protectionist measures by Trump and China and the pandemic, this depression is rooted in the flawed logic of capitalism. Recessions and depressions are a product of the crises of overproduction that are inherent to capitalism, as explained by Karl Marx. Capitalism’s drive to use technology to produce as many products as possible to overcome a declining profit rate continually overshoots the possible market for these goods. This is a result of the fact that profit under capitalism comes from exploiting labor, so workers are not paid the full value of what they produce. It is the failure of capitalists to spend these profits in productive ways, instead pursuing an orgy of speculation, that is a central pillar leading capitalism into deep crises.

For a Massive Green Jobs Program

It will take a massive government intervention to start to pull the economy out the depression. A massive Green New Deal jobs program could put tens of millions of people back to work and also address climate change. However, the political motivation to do this is lacking. In the US, both Democrats and Republicans would have to take on the energy corporations and bring them into public ownership to force through the necessary structural changes to the economy. Neither party has any interest in doing this. Corporate America would revolt at any suggestion of such actions. This is not why they fund the two major parties. Saving capitalism and boosting the short-term profits of big business will continue to be the guiding light of their policies.

Some activists may hope that this crisis of the oil industry might be the event that spells the end of dependence on fossil fuel production. However, much more likely are government bailouts of the fossil fuel industries in an attempt to slow down the loss of jobs. Also, the short-term fall in oil prices can also seem to make oil competitive with the lower cost of providing solar and wind energy. On a capitalist basis, this can dent any serious shift toward transforming the economy through a green job program.

A real transition from fossil fuels to Green energy will be dependent on a political movement to challenge the power of the fossil fuel companies and ultimately remove the oil companies from their positions of power and influence. Young people will be at the forefront in demanding that this transition happen. In the short term, there will be huge political pressure from below to reject any bailout of the polluting oil industry. This can put huge pressure on elected officials.

Socialists need to help build this pressure and to demand a massive jobs program linked to green energy. There should be no bail out of the fossil fuels industry. At the same time, we need to demand that no workers lose their jobs in this transition to green energy. Workers should be retrained so they can be part of rebuilding infrastructure based on renewable energy.

Winning a comprehensive green jobs program will also demand a battle to end the political stranglehold of politics by big business. This will mean challenging capitalism which dictates production for profit with no concern for social consequences. This will mean building new mass workers parties and a powerful socialist movement.