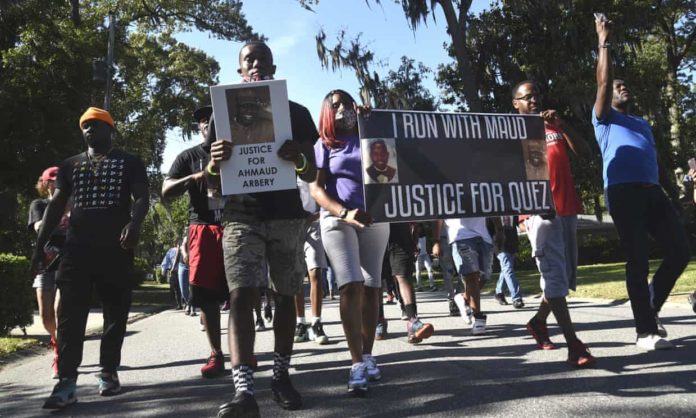 Ahmaud Arbery was shot dead while jogging on February 23 in Brunswick, Georgia. His killers were two white men, Gregory and Travis McMichael. That day, the McMichaels waited in their cars with weapons, including a shotgun that would take Arbery’s life. They claimed that Arbery was the suspect in a supposed string of home burglaries, and that he was running from his latest break in. The McMichaels confronted Arbery. In seconds, Arbery laid dying on the ground. Afterwards, the McMichaels claimed self-defense. The confrontation was filmed by William “Roddy” Bryan, who thought that the recording helped clear his “friends,” the McMichaels.

As it turned out, there were no reported home break-ins in the area. Arbery was unarmed.

Arbery was 25 years old the day of his death. He was an ordinary black working-class person who grew up in Brunswick. Excelled at football and filled with a love for running. Working two jobs, he expressed the emotional toil of the 9-to-5 job, a feeling that is shared throughout the working class.

What ensued after Arbery’s death was the legalistic version of hot potato. Gregory McMichael was a former cop and a former investigator for the Brunswick District Attorney (DA) Jackie Jackson who later recused herself from the case. Next came Waycross DA Geroge Barnhill. Apparently, Barnhill previously worked with McMichael on a past undisclosed prosecution of Ahmaud Arbery, whose only run-ins with the law was shoplifting and an alleged firearm possession as a highschool student. Not only did Barnhill recuse himself for this reason, but afterwards wrote a public letter defending the McMichaels’ actions, claiming it was in “self-defense” based on Georgia’s “Stand your Ground” law. Now after this embarrassing spectacle, Georgia’s attorney general Chris Carr has appointed Atlanta area’s DA Joyette M. Holmes, a Republican-affiliated black woman who is alleged to be the ally of Governor Brian P. Kemp, to take control of the case. It’s clear that the McMichaels’ connections with the police department and the judicial system allowed them to stay free for 74 days. These institutions are built to ensure the subjugation of working-class people and the poor, particularly black people.

Just like with Trayvon Martin, there are those who play up Arbery’s past behavior. Various media outlets have rushed to print about Arbery’s past arrest for shoplifting and an alleged incident where he brought a firearm to a basketball game. Trump recently stated “You know, it could be something that we didn’t see on tape,” referring to video of Arbery’s death.

Rarely is poverty mentioned when mass media outlets begin this ritual of determining if a black person who is killed by police was “heading down that path” or not. Black working people are not only forced to work degrading low-paying jobs, but are expected to be pure moral stewards. This is because mass media outlets usually conceal the class component of these events to hide the obvious causes of any supposed past “wrong-doing” committed by a victim of police violence. Meanwhile, the ruling class lines up behind Trump and Biden despite the horrific records of supporting disastrous wars,  expanding the prison-industrial complex, and various sexual assault allegations.

But just like Trayvon Martin and other black people killed by the police, working-class people – black and white – mobilized demanding justice for Arbery. After the leaking of the video showing Arbery’s murder, working people sprang into action. Despite the fear of the COVID-19 pandemic, hundreds of protestors rallied in Brunswick, demanding that both Gregory and Travis McMichael be arrested. Workers in other cities began to host jogging events with the #IRunWithMaud hashtag. This solidarity from the working class, backed by large mobilizations, forced Brunswick police to arrest the McMichaels.

Justice, however, cannot be obtained with an arrest. Again, the Travyon Martin case proved that with the acquittal of Geroge Zimmerman.

What is needed to obtain justice is if this swelling of solidarity became  concrete with an organized mass movement of the working class, united across race, gender, sexual orientation, and all other divisions. Such a movement could organize actions to not only ensure the arrests of the McMichaels, but to fight against the racist capitalist system and its armed police force through non-violent mass disobedience. Working people could launch daily social-distancing car protests and create immense pressure on all those in power who openly or covertly side with racists vigilantes. These efforts should be organized with the participation of unions – as organizations of working people against the ruling class – they can play a key role in broadening the struggle. These methods could help this movement to go beyond the realms of social media advocacy; which, while a positive inclination, can often fade into the background due to time and other events flooding the news cycle. Ultimately, however, to fight for justice for Ahmaud Arbery, workers must question the system that allowed such an event to happen in the first place. Capitalism (a system that has led in many ways to the worst effects of the COVID-19 pandemic that has led to 80,000 deaths nationwide disproportionately working- class, poor black and brown) has proven to be the very source of institutional racism. The movement to defend black lives will need to be to tear down the pillars of capitalism and topple all of its reactionary racist and sexist ideas. Replacing it with a socialist society, where we can begin to undo the legacy of racism and all other oppressions.