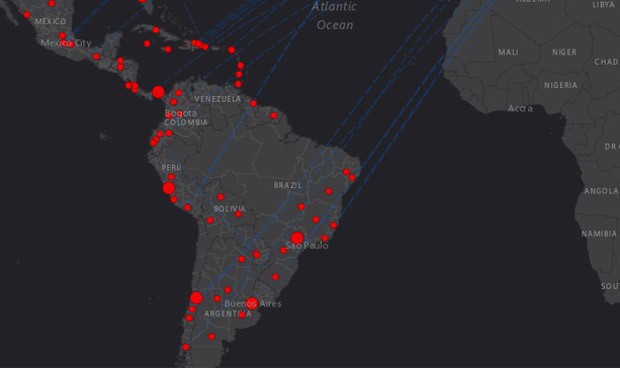 “With bodies abandoned on sidewalks, slumped in wheelchairs, packed into cardboard coffins and stacked by the hundreds in morgues, it is clear that Ecuador has been devastated by the coronavirus.” (New York Times 4/24/2020)

The onset of the COVID-19 pandemic is set to inflict immense agony, pain and death on the working class and the poor across Latin America. The region is suffering from the pandemic — which is still in the early stages and is likely to worsen in key countries — alongside an economic plight of weak commodity prices, massive capital flight, record indebtedness, the oil market crash, and a collapse in tourism. COVID-19 is now pushing poverty and living conditions in the region into the abyss as far as millions of workers are concerned.

The Financial Times and the strategists of international capitalism are forced to provide a realistic, grim picture of the human catastrophe and the nightmare that is unfolding. The IMF predicted in April that GDP in the continent would fall 5.2% this year, worse than sub-Saharan Africa, the Middle East or south Asia.

The UN’s Economic Commission for Latin America and the Caribbean (ECLAC) projected this week that the poverty rate across Latin American and the Caribbean will rise to 34.7% by the end of the year, its highest level since 2007. Extreme poverty is forecast to rise by 16 million – — to 83 million (Financial Times). This is certain to be an understatement as Latin America is already the world’s most unequal region in terms of income and, for several countries, the expected sharp increase in poverty comes on the heels of seven years of economic crisis.

Even before the coronavirus swept through Latin America and the Caribbean, capitalism was ailing in the region. With sluggish commodity prices and massive debt, economic growth was anemic — averaging just 0.7% annually over the last six years.

“The social crisis which exploded last year is a sign of the enormous inequality which continues to overwhelm our region. This crisis could exacerbate those problems,” warned Alicia Barcena, head of ECLAS. The new crisis is coming only months after a wave of explosive street protests across the region over austerity measures, inequality and inadequate health, welfare and education systems. The movements shook up the ruling regimes countries from Chile to Ecuador, Bolivia and Colombia, to Puerto Rico and Haiti.

The real impact of the new crisis is difficult to fully assess: Almost half of workers in Latin America work in the informal economy, with precarious work and wages on a day-to-day basis; there are no reliable records of their earnings or even whether they are working at all.

Seriously worried about the social and political implications of the crisis, some of the biggest economies have announced some new or expanded assistance programs to the poorest sections of their population. But short-term handouts that replace a tiny amount of lost income are grossly inadequate for a huge section of the population who are faced with the combined effects of the economic slump and the quarantines.

“It’s not just about compensating lost income,” said Nora Lustig, professor of Latin American Economics, at Tulane University in an interview to the Miami Herald pointing to the horrid living conditions and lack of facilities in sprawling shanty towns, favelas: “The poor are more susceptible to infection and to high death rates. How can people wash their hands safely in slums? If you look at poverty in a more multidimensional sense, being alive is a big part of it too.”

Devastation in Brazil and Ecuador

Ecuador, along with Brazil, has been the hardest hit by the coronavirus with thousands of deaths, in what is one of the worst outbreaks in the world, rivaling the astronomical rates of Spain or Italy.

The New York Times documented the shocking effects of the outbreak, suggesting that Ecuador’s COVID-19 death toll is 15 times higher than its official tally, highlighting the damage the virus can do in countries stuck by poverty and the defunded health care systems. Medical teams documented hundreds of dead bodies removed from residences and overcrowded hospital morgues in Guayaquil. In some areas, bodies were abandoned on the street or cemetery entrances. There is a total collapse of the healthcare system, as hospital workers become infected, leading to massive staffing shortages.

The disaster faced by the Ecuadorian people is a direct result of the criminal negligence of the ruling class and the Moreno government. They had imposed massive cuts in health care funding — part of the austerity measures demanded by the IMF and the international banks. In what is in effect a criminal act, it was reported that at the end of March, just as one of the worst outbreaks in the world was taking place, Moreno made a payment of $320 million to service its international debts!

In Brazil, the right-wing regime of Jair Bolsonaro has entered a period of crisis, campaigning against the coronavirus quarantine and pushing legislation to re-open the economy, disregarding the potential for an even greater disaster.

At the end of April, there were officially over 5,000 deaths. Alarmed health agencies warn that the actual number is 12 times greater, with hundreds of thousands infected. The numbers are growing faster than in Spain during the same stage of the infection, according to COVID-19 Observatory. As in Ecuador, the pandemic is driving an already weakened health system towards total collapse. The heaviest casualties are in the dense urban areas in the industrial states of São Paulo, Rio Grande do Sul and Minas Gerais, already devastated by the deep economic crisis that started in 2017. According to the World Bank, the forecast for the Brazilian economy is to shrink further by 4.4 percent in 2020.

Economy: From “Lackluster to Calamitous”

Not prone to exaggerations, the World Bank describes the region’s situation as going from “lackluster to calamitous.” The forecast for Venezuela — the region’s biggest oil producer, facing a collapse of the price of oil well as inhumane sanctions from the US imperialist regime — is an economic collapse of an additional 18% this year. ECLAC’s projects that Argentina and Ecuador, both burdened by huge debts to international imperialism, are forecast to see their economies shrink by 6.5%.

When the coronavirus hit, Haiti was still recovering from last year’s political turmoil: continued protests against the corrupt regime of Jovenel Moise, with dozens of dead and hundreds injured and businesses shuttered for weeks at a time. Since March, the country has been on lockdown, and the UN Agency now predicts the hemisphere’s poorest nation will see a further economic collapse of 3.1%.

In early April, the finance ministers of the G20 — the world’s largest economies — agreed to halt debt collection through the end of the year for the world’s poorest and least developed countries. That move is expected to free up some $20 billion that would otherwise go to debt payments.

Also, the International Monetary Fund began offering below-market-rate emergency loans that might allow some countries to bolster health services or offer assistance packages to keep workers employed. But in the vast majority of countries, this is simply piling up more debt to the international financiers on top of the existing mountains of unsustainable obligations.

World Bank data shows that the external debt of low and middle-income countries doubled between 2000 and 2018. Even before the pandemic, countries like Argentina faced structural economic crises, largely linked to their external debts. In October 2019, the IMF warned that several countries were in actual default or at high risk of defaulting on their massive debts.

The pandemic has now exacerbated an economic crisis that was already developing across the globe and especially in Central and South America, triggered by a drop in commodity prices (raw materials) and exports. According to Bloomberg News, the prices of the main export commodities had fallen by 27% in 2020.

In order to continue to pay their external debts, governments across South America imposed harsh austerity and privatization policies as well as vicious cuts in health care, education and public services, cutting wages and pensions to the bone. According to a recent report of CADTM International, the most indebted countries spent 7.8% of their GDP on external debt servicing and only a meager 1.8% on public health care.

New Social Explosions on the Horizon

The looming COVID-19 economic crisis will have serious political implications and will lead to new social explosions. Desperation, uncertainty and anger and the absence of a clear alternative offered by the workers’s movement are creating a toxic cocktail with unpredictable consequences.

Already in places like Haiti, Colombia, Venezuela and Bolivia there have been near riots — often against the safety measures. In El Salvador and Honduras, poverty and dislocation are threatening to escalate into chaos as criminal gangs are challenging the corrupt ruling regimes.

It is becoming increasingly clear that Latin American capitalism is headed for the abyss. The capitalist class and their political representatives will try to unload the crisis of their system and their criminal policies onto the backs of the working class and the poor across the region.

What worries the ruling elites in Latin America is the recent memory of October and November 2019 when a wave of revolts exploded and threatened to spread like wildfire across the region. (See November 2018 article by André Ferrari — “Everything Solid Melts into Air” here)

The movements erupted in Ecuador with a workers’ and indigenous people virtual insurrection against imposed austerity measures. Chile followed with a heroic mass revolt of workers and young people against the Piñera government and the capitalist system. In November, the Colombian working class was on the move with a massive general strike. This was on the heels of the magnificent movement of the Puerto Rican working class that brought down the Rossello regime and the revolt in Haiti against the corrupt regime of Jovenel Moise.

While these movements, have subsided, they are simmering under the surface threatening to erupt again.

In Argentina, the new government of Alberto Fernandez adopted early measures against COVID-19, including mandatory social distancing, suspension of schools and seemingly managed to reduce the curve of the contagion. This has increased Fernández’s popularity. But Argentina has 40% of its population in poverty or “extreme poverty” as a result of the austerity, crisis and foreign debt. The ruling class is faced with increasing radicalization which had seen five general strikes against the previous Macri government and a huge women’s movement for equality and for abortion rights. The question of the debt will also be back with the IMF demanding payments and the imposition of new austerity and privatization.

In reality, the resources do exist to deal with the crisis facing the masses across Latin America, arguably one of the richest areas in the world. Putting an end to the looting of the continent, and expropriating the immense wealth of the capitalist classes is now a matter of life and death for millions of people. This would allow resources to be directed in funding emergency health care services, testing facilities, quarantine, medical staff and equipment needed. The plunder of the region by multinational corporations and banks as well as the domestic ruling capitalist classes has to end.

At a time when the region is in dire need of massive investment to tackle the combined crisis of the pandemic and economic collapse head-on, a colossal capital flight is taking place with billions of dollars fleeing into the major imperialist centers. This is not some “mistake.” It exemplifies how the whole system operates. It illustrates the failure of the “free market” and capitalism to deal with the current emergency.

As in the case of the averting environmental catastrophe, this pandemic illustrates the necessity of a radical overhaul of how human society is run. What’s needed is a democratic socialist economy based on public ownership of the main means of production and democratically planned to satisfy the needs of the vast majority, as opposed to the interests of a tiny few.