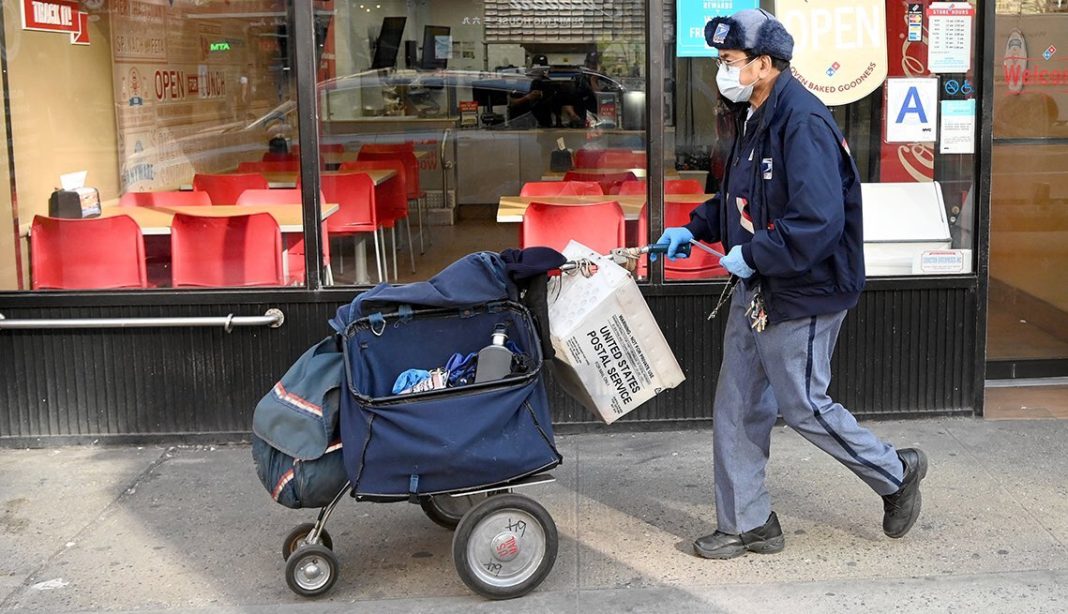 The COVID-19 pandemic has caused mail volume to drop dramatically at the United States Postal Service (USPS), and the Postmaster General Megan Brennan has said publicly that, without action from Congress, USPS could run out of money by September.

Congress has given billions in bailouts to corrupt corporations, yet Trump has promised he would veto any stimulus bill that included funding for the postal service. In late April, an article from the Washington Post came out stating that the Trump administration was in talks with USPS about a $10 billion loan in exchange for giving huge control over the agency to the Treasury Department headed by Trump-appointee Steve Mnuchin.

The COVID-19 pandemic and the economic collapse in the U.S. and world economy has pushed USPS further into financial crisis, and the Trump Administration is using it to attempt to privatize the postal service and break the postal unions. The only way out of this financial and political crisis is with action led by postal workers that can engage and bring in both organized and unorganized logistics workers as well as broader layers of the working class. We have to fight back not only against attacks on the postal service, but against attacks on our living standards as a whole as the economic crisis deepens.

The “Pre-Funding Mandate” and Attempts to Privatize USPS

For decades, corporate interests and their politicians in both parties have been trying to privatize the postal service. In 2006, the Republican-controlled Congress passed the Postal Accountability and Enhancement Act, which included a “Pre-Funding Mandate” that forced the postal service to fully fund retiree benefits and pensions 75 years into the future. The only federal agency forced to do so. This was done in order to push the postal service into financial difficulty so the case could be made for privatization.

Since entering office Trump and his administration have had their eyes set on privatization. In 2018, the Trump Administration came out with a study from the Task Force on the United States Postal System, which laid out the dire financial situation at USPS. In the report Trump’s task force claimed the only way to save the postal service was to privatize the agency, cut service, raise rates, and – under the guise of revising collective bargaining – attacking and attempting to break the postal unions. The report made no attempt to highlight new ways to bring in revenue such as postal banking, or national vote-by-mail, and made no attempt to draw parallels between the “Pre-Funding Mandate” and the financial difficulty of the agency.

The COVID-19 pandemic has caused a partial shutdown in the U.S. and world economy, which has caused anywhere from a 30-50% decrease in mail volume nationwide. While there has been a slight increase in package volume as people are quarantined at home, it has not made up for the lost revenue from the drop in mail volume.

While COVID-19 wreaks havoc on the postal service and the economy as a whole, postal workers are still delivering mail and packages to over 160 million addresses in every corner of the United States every day. From mail handlers and clerks working in close proximity to each other in the processing and distribution centers, to the letter carriers going door to door, postal workers are at a high risk of contracting and spreading the virus.

It can be difficult for postal workers to demand hazard pay at this moment due to the dire financial situation at the agency, which is why the demand needs to be linked with the demand for Congress to fully fund the postal service, and to repeal the Pre-Funding Mandate.

On April 21, Bernie Sanders hosted a Town Hall on “Saving Our U.S. Postal Service” with the presidents of three out of four postal unions (National Association of Letter Carriers, National Postal Mail Handlers Union, and American Postal Workers Union). During the town hall the union leaders did a good job of laying out the man-made financial crisis at USPS, and the need for Congress to repeal the “Pre-Funding Mandate” and to fully fund the postal service.

But the shortcomings of the Town Hall were that the union leaders did not put forward a plan or call to action from their membership, other than to call your senator and tell them to support financial aid for USPS. To be clear, this tactic could be effective if it was one part of an overall strategy to mobilize union members and the general public across the country in a coordinated way, but the biggest issue with how it is framed is that it is done in an individualistic manner that is not necessarily empowering for workers.

At this moment the postal unions leadership should be putting forward a bold set of broader demands like hazard pay, and pushing the agency to find new ways to increase revenue in the future like postal banking, national vote-by-mail and other initiatives. The postal union leadership should be coordinating and planning stand outs or car caravans at every congressional office and central post office in the country, with these demands front and center on signs and given in interviews to local media. This would be an effective way to build public support for funding the postal service, and put pressure on Congress to act now.

On April 28, Workers Memorial Day, there were small “socially distant” standouts organized by postal workers in Des Moines, Portland, and Seattle that gained media coverage, and got honks of support from people driving by. Postal workers should push our local union leaderships to plan stand outs and actions like these as a way of pressuring national union leadership to do this across the country.

The Postal Workers’ COVID-19 Response Facebook group has already reached over 20,000 members, and has been a good way for postal workers across the country to stay in touch, ask questions, and share stories. This could also be taken up at local or regional levels, with closed Facebook groups for postal workers from every craft and union to organize standouts, coordinated call-in campaigns to congressional offices, or other actions around the demands for hazard pay, repealing the Pre-Funding Mandate, and fully funding the USPS.

This ultimately shows that as postal workers we cannot put all of our trust in Democratic or Republican politicians to save the postal service and our jobs. While the Republicans in most cases have outright attacked the postal service and our unions, with attempts to privatize and to attack the wages and benefits postal workers fought hard for. Democrats, who are supposedly for a public postal service and supportive of unions, have done very little other than verbally protest while multiple stimulus bills have gone through with little or no funding for USPS.

In 1970, postal workers were in a similar situation. At that time USPS was the Post Office Department and funding for it, as well as workers wages and benefits, were tied directly to Congress. After having endured years of miserable wages and working conditions, with government inaction, postal workers went out on strike. It became known as the “Great Postal Strike of 1970,” the largest “wildcat strike” (meaning not officially sanctioned by union leadership) in U.S. history, and after only eight days won huge gains in wage and benefits for postal workers. At that time it was illegal for federal workers to strike (and it still is), but that did not stop postal workers across the country from taking action.

Postal workers and our union leadership should look to the postal strike of 1970 as a  lesson for our struggle today. While a strike may not be needed at this exact moment, it may become necessary in the near future with continued attacks from the Trump Administration, and inaction from Congress. The COVID-19 pandemic has deepened an already unfolding financial crisis at the agency, and this could be a life or death situation for the public postal service.

This economic and political crisis has revealed that it is only through organized and coordinated action by postal workers and the broader working class that we can stop the attacks from Congress and the White House, as they attempt to push the cost of this economic and public health crisis on the backs of workers everywhere.

The author wishes to remain anonymous due to potential retaliation from USPS management. Postal workers and other federal employees have restrictions on certain political speech when speaking to the media about workplace issues.