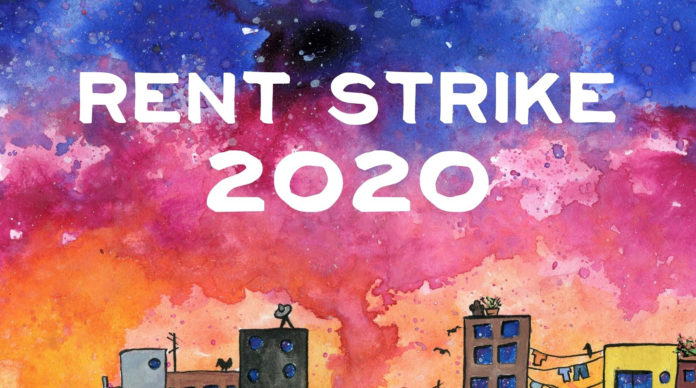 The current collapse of the U.S. economy in the wake of the COVID-19 has thrown working class people’s lives into turmoil. Anxiety about the virus is compounded by economic concerns: how to pay the rent, affording food and health coverage.

Some grocery store shelves are still empty while almost all prices seem to be rocketing. During April, for millions, money ran out. Long lines at food banks are reminiscent of the Great Depression. In Santa Rosa, California, the Empire Food Bank used to give out 650 meals each day and are currently handing out 120,000 meals a day, and are expecting that number to double. Millions of workers are visiting food banks for the first time in their lives.

Into this context, the calls for a Rent Strike on May 1 and beyond have won support. Some three million people have signed on the RentStrike2020 petition, and many thousands have joined Facebook rent strike group pages, city by city. People are weighing up how to spend any cash left and how to stretch their federal $1,200 checks. California Governor Newsom argued in mid-April that “social normalcy is months away.”

While mortgage relief to homeowners has been swift in many states, for renters, uncertainty has prevailed. Faced with the potential of millions of eviction orders, a majority of states have issued Eviction Moratoriums, some lasting several months after shelter in place orders are removed. A few cities are allowing renters to forego late fees if they can prove that they have had the virus. Those tenants would in later months be expected to pay back their owed rent. This debt would be added to the mountain of student, health care, auto and other debts. And given that 44% of workers earn less than $18,000 this is an economically unmanageable situation.

Taking Action on the Rent Strike

Already across the U.S., renters have taken things into their own hands. Tenants from Los Angeles to Boston are organizing tenant meetings online, over the phone, and in zoom calls, safely breaking out of their isolation. Facebook rent groups are springing up in cities across the country, encouraging each other to reach out to their fellow renters through fliers, postering, and social media.

In April, some one-third of apartment tenants were unable to pay rent and thousands of retail stores, hotels, and fast food chains also did not pay rent. This month, however, for renters will be a bit different as many tenants will be watching the mail for their $600 top-up on their unemployment checks. However, many workers, including those undocumented will likely not be getting financial help.

Rent Strike 2020 is a campaign that is based on organizing. It does not argue for everyone to simply stop paying rent. Instead this movement is about people organizing together and taking collective action in defense of their homes. Tenants are already collectively acting to negotiate rents down. This is not a rent payment plan, like so many corporate landlords are promoting, which would see all renters go deeply into debt. Rent Strike 2020 is arguing that tenants should get together and win the majority in their building to propose a significant rent reduction. This rent reduction could be a 25% cut in rent or a 50% cut in rent, whatever tenants think they can reasonably pay and survive. Additionally, for those who cannot afford anywhere near what the majority consider a reasonable demand, they should pay only a token amount, and be included in the negotiating with the landlord. No renter should be left behind during this COVID disaster.

Housing is a Right

When looking into their own finances, renters will be wondering if they pay their full rent, will they be able to survive the coming period. In the last month a record 22 million people applied for unemployment benefits. Unemployment is expected to rise as high as 47 million workers by June and some thirty-five million will lose their employer-based health care. While food, health care and utilities can be cut off, renters have one certainty: that they currently live under a roof. They should not move out if they cannot afford the rent. Rent moratoriums will eventually be lifted, but these moratoriums give tenants a window in which to begin to organize.

As tenants move to organize they will never see rent the same way again. Renters will be googling their landlords, figuring out how many buildings they own and in some cases being able to figure out how much money the landlords are making out of them. The biggest corporate landlord Mid America Apartment Communities owns nearly 100,000 units of housing and made $973 million in profits off their tenants in 2019. Tenants will also ask why they have been paying in some cases, half their paychecks to a landlord who does not need the money. Very few, if any, landlords have been visiting food banks during this crisis. Millions of renters are.

Rent Strike 2020’s demand for a rent payment freeze with no late fees or accrued debt, alongside a mortgage payment freeze is the immediate political solution required by this crisis. Unless eligibility for unemployment benefits is made truly universal, then there will be many individuals and families left behind. This movement is a fight to prevent renters being punished for this Coronavirus. We are also in favor of federal support for small landlords who can prove they depend on these rents for their basic incomes.

During the summer and into the fall, there will be many battles to keep people housed. This will be a priority. A “Can’t Leave! Won’t Leave!” movement would strike broad sympathy among all of those whose lives have been thrown into turmoil by the establishment’s poor response to the COVID-19 threat. As shelter-in-place restrictions are removed, mass organizing around these eviction cases, both at the courthouse and outside the homes of those facing eviction can gain huge community support.

As the crisis unfolds this year, the demands of the rent strike movement will also likely adjust to wider demands for total rent debt forgiveness, for Corona-era evictions to be struck from tenant’s records, and for wider political changes to challenge the insecurity of the way housing is organized in the U.S.

Wider Goals for the Movement

Bernie Sanders’ campaign in 2016 and again in 2020, pointed the blame for inequality on the billionaire class and their dominance of politics. Sanders was responsible for popularizing the ideas that politicians should take no corporate donations, that we need Medicare for All, and the cancellation of student debt. In the California primary Sanders won the areas with the most renters. He argued for a national rent control law. The millions of volunteers for Sanders’ campaign could make a huge difference in the Rent Strike fight. To do so this would require organizing people into a new group, separate from Bernie’s campaign and independent of  the Democratic Party. Such a new group should be formed around Bernie’s program and could represent the basis for a new working-class political party independent of big business money.

Renter activists should look to our past to learn from successful rent strikes from Buenos Aires to Soweto to Glasgow. In the 1964 Harlem rent strike tenants forced the Mayor of New York to go after private slumlords who for decades had let buildings decline. In Toronto, more recently, two rent strikes forced landlords to lower rent hikes. This current situation is not simply about the ability to afford a rent hike, but for many it is about being able to pay any rent at all.

The $600 top-up to their unemployment covered in the Corona Recovery Act will make a huge difference to those families and individuals that are eligible for it. But it will only last a few months. The landlords are already salivating at the chance to get their hands on our checks. Renters must organize. They must plan for a protracted battle over the coming months. Austerity layoffs by local and state governments have already commenced. Many retail, hotel and restaurants may not ever reopen. We cannot afford the old levels of rent. We cannot afford a system that puts profitability over people’s health and well being. We need a socialist future.