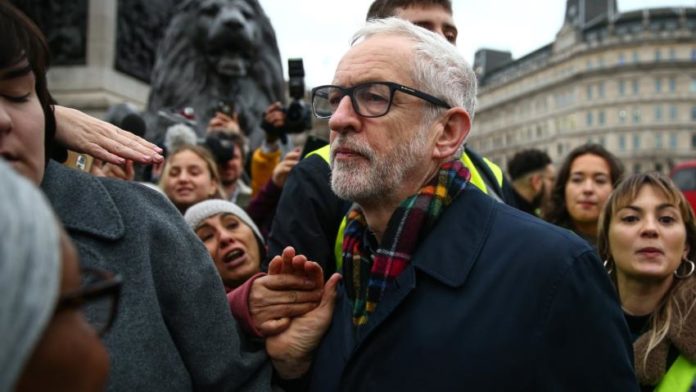 Organize to Fight the Right!

Poisonous, vindictive, laced with racist undertones, and breath-taking in their contempt for all those fighting to elect a Labour government with an anti-austerity program. These descriptions perhaps go some way towards summarizing the contents of the leaked conversations, held between senior Labour officials between 2015 and 2018, which are contained within the 850-page-long report that was sent to the press over the Easter weekend.

In many senses, this report’s findings vindicate Jeremy Corbyn and his team. They show that the real obstacles preventing the speedy processing of cases of alleged antisemitism were in fact created by right-wing officials who were determined to weaponize the issue against the leadership. They detail how cases were deliberately leaked to the press by Blairite staffers before they were passed on to the people responsible for investigating them. For reasons which are currently obscure, but which apparently pertain to legal advice, it seems this report has not been officially submitted to the EHRC inquiry being conducted into the supposedly widespread problem of antisemitism in Labour. But it nonetheless exposes the pernicious nature of the campaign that has been waged against Corbyn on this issue.

Beyond the issue of antisemitism, the report reveals the incredible extent of the sabotage these handsomely paid senior staffers were engaged in, working hand in hand with the then Blairite general secretary of the party — Iain McNichol — to actively undermine Labour’s chances of winning in 2017. This even went so far as siphoning party funds away from winnable marginals and towards seats held by Blairite MPs whom the right deemed it necessary to “protect at all costs”. One leaked WhatsApp conversation includes senior officials, along with McNichol, discussing “throwing 50K” at Tom Watson’s seat for example.

Not only were these funds coming from Labour Party members and trade unionists who overwhelmingly supported Jeremy Corbyn but, given the marginal nature of the 2017 result, it is possible that these underhand maneuvers played a decisive part in denying Labour the victory.

Meanwhile, the cruel, bullying and arguably at times racist language that was used in many of these leaked threads further reveals the thoroughly rotten character of the individuals involved. Corbyn allies such as Diane Abbott, as well as young Corbyn-supporting members, seem to have been singled out for particularly unpleasant forms of abuse. None of the officials named in this report, some of whom continue to hold senior positions in trade unions, should have any place in the workers’ movement now or in the future.

Correctly, thousands are already demanding the immediate expulsion of all those who are revealed as having actively worked against a Labour victory. With the report yet to be published in full, it’s possible further revelations will take place in the coming days.

But as well as vindicating Corbyn in a whole number of ways, what this report also dramatically clarifies is the utter folly of the approach adopted by him and his senior leadership team of seeking “unity” with the party’s right instead of mobilizing against them. This is the strategy that ultimately cost Corbyn the opportunity to be Prime Minister. It meant squandering the potential power of the active and extremely loyal base of support which existed for socialist policies — a base which numbered hundreds of thousands at its height.

Ultimately the Blairites’ prime loyalty has always been to the class they represent: the capitalists. Only an approach which was sufficiently fierce in its own class loyalty — to working people — would have been sufficient to counter their offensive and defeat them. This would have meant mobilizing the huge numbers of Corbyn supporters against the pro-capitalist right, fighting for democratic mandatory reselection of MPs, and organizing around a clear socialist program.

The failure to do this left Corbyn looking weak in the face of the persistent and utterly unscrupulous attempts to undermine him. What’s more, the concessions made to the Blairites, especially around the issue of Brexit, contributed to the growing disorientation and confusion that set in around that issue among workers and young people. In other words, attempts to bring on board and placate the pro-capitalist right came at the cost of undermining the most crucial unity socialists must seek to build: that of working-class people.

All this has paved the way for Keir Starmer’s victory in the recent leadership election. Despite having donned the clothes of the left in order to win support from a layer of former Corbyn supporters, Starmer’s reaction to this leaked report is an important signal as to the real character of his leadership. The independent inquiry he has called following the document being leaked (it is reported he had access to the file from the day he was elected to the leadership) appears to be primarily aimed at investigating the report’s authors and the whistleblowers. Such an inquiry will in no way be “independent”. In fact, it is more likely to attempt to whitewash the despicable actions of the Blairites.

There was never any basis for unity with Labour’s right. The Blairites represent class interests which are fundamentally opposed to those of workers. Starmer’s victory in the leadership election means that the Ian McNichols of this world now feel Labour is once again going back to being “their party”. Appeals by leading so-called Corbynites, such as Owen Jones, for people to “get behind Starmer” will only strengthen that.

Crucial now, is that a mass struggle is built to fight for consistent political representation for working-class people. To do so effectively, such a movement needs to abandon any notion of this being possible on the basis of compromise or unity with the right wing of the Labour Party. Workers need their own independent political representation. Those who have already been politically activated by Corbynism can form an important basis for this. But to succeed it must go beyond this, drawing in workers, young people and trade unionists, and organizing around socialist ideas. And if wresting control of Labour’s leadership and machinery back from the hands of the right proves impossible, it will become necessary for such a movement to find its expression through a new party or formation.

The multiple capitalist crises our world currently faces — from the coronavirus, to the collapsing economy, to the climate catastrophe — show that we do not have unlimited time to build a movement to change the world. The experience of Corbynism should stand as a warning as to the dangers of attempting to do so without being prepared to break with the representatives of the sick system of capitalism. And these lessons must now be absorbed, lest they be repeated.

If you agree, we urge you to join Socialist Alternative today.