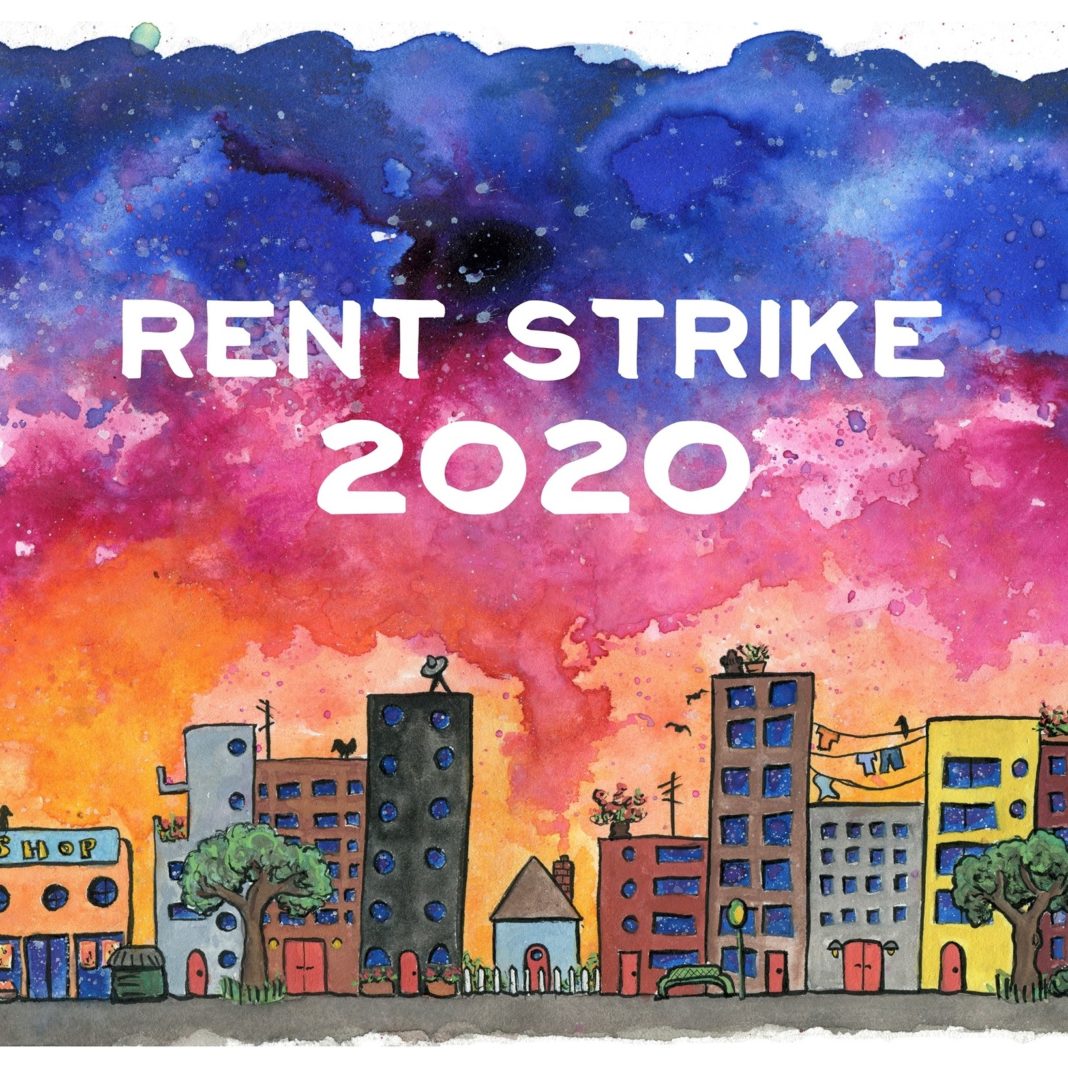 The massive, ongoing crash of the economy is laying bare and massively exacerbating the huge disparities of wealth in the U.S. and in the world. Working people in the U.S. are facing nothing less than a catastrophe with an estimated 50 million — nearly a third of the paid workforce — having lost their jobs or about to lose their jobs. This is a level of unemployment not seen since the Great Depression. Having lost their income, as well as up to 35 million losing their employer based healthcare, these workers are now trying to figure out how to pay for food and basic necessities.

It is in this situation that the call for a Rent Strike 2020 has received a huge wave of support with no less than three million signatures demanding a suspension of rent payments. The Wall Street Journal reported that almost one third of apartment renters did not pay rent in April.

Meanwhile Congress passed a bailout which, while providing some limited relief for working people, is overall a massive bailout for corporate America. The federal government has also provided some relief to those with mortgages with Fannie Mae temporarily suspending foreclosure. Most state governments have enacted some form of overall eviction moratorium as long as the lockdowns continue. While this is welcome it only defers the problem as millions see their rent arrears pile up and face eviction in a few months when the lockdowns are lifted. To win the relief needed for renters and workers generally, there will have to be a serious fight.

In regards to rent, big business is again demanding a bailout for itself. Large retail businesses have already started their own rent strike of sorts. Subway – with 20,000 stores – has told landlords not to expect full rents on April 1 and it can’t say for May 1. Cheesecake Factory – with 300 restaurants – is publicly withholding its rent payments to its landlords. The court system is going to be overwhelmed with business cases. The Chambers of Commerce will no doubt sit down governors and mayors and insist on rent relief for these “renters.” The landlords, mostly over-indebted, as is the bulk of corporate America, will be looking for government handouts.

Even before this crisis, some 70% of Americans had less than $1,000 in savings and 45% had no savings at all. Many have now lost pay for the past weeks. Already on April 1, a third of tenants were not able to pay their rent. In California, mortgage payments have been frozen for landlords and homeowners, and the governor has urged cities to stop evictions for the duration of the shelter in place. The major Bay Area cities have allowed rent payments to be frozen for those who’ve lost income because of the crisis, with late fees waived, but left tenants to negotiate future back-rent with their landlords.

What We Can Expect in May And June

The current recession will dwarf any recession in the past 90 years. With the last recession in 2008-9, nine million homeowners were unable to make their mortgage payments and had their homes foreclosed on them. Banks essentially got bailed out while working families got put out. In fear of the scale and repercussions of a new wave of foreclosures, many governors across the US have moved to pressure the big banks to accept a moratorium on mortgage payments for business owners, landlords and homeowners. In some states, this preemptive freezing of mortgage payments has been carried out without means testing, with no proof of loss of income. This will delay an immediate wave of foreclosures.

The case is different for renters. They are more working class, less likely to vote than homeowners, and the Democratic and Republican establishments are less interested in them. So far, there are very few cases of local governments suspending rent payments or offering rent relief, particularly at the state level. But the establishment is also aware that mass evictions of tenants during state shelter in place or even directly after it, will be abhorrent to ordinary people. The political elite are already being blamed for a too little, too late response to this crisis.

Now that more than 90% of the population are in states that are telling people to stay home, the demand for an eviction moratorium is sweeping the country. Thirty eight states now have some level of eviction moratorium in place for the duration of the pandemic, with more likely to follow. In many states and counties courts are simply not convening except for emergencies, delaying all eviction hearings until at least June. In Delaware the governor has promised renters who have lost their jobs or incomes a $1,500 check for emergency rent relief. In Oakland, California the city council is allowing a freeze on rent payments for those that test positive for the virus or those unable to pay because of cut hours – however they will have to pay later!

The State of California has recently moved further than any other areas with an eviction ban going upwards of five or six months. The California Judicial Council, the top decision making body in the state’s courts, unanimously approved a stay on all evictions until 90 days after the governor declares an end to the state of emergency. This will give renters until September before any landlord could take action against them.

These moratorium measures across the country are extraordinary and a sign of the enormous complications facing the establishment. During the Great Depression such moratoriums were exceptional: in Chicago the mayor declared one after weeks of widespread tenant and police clashes. The ruling class are moving now out of fear of this perspective for such struggles developing again.

This is the moment for tenants to get organized and connect with their fellow renters, building-by-building to demand an end to all rent payments during the crisis! With almost fifty million rental units in America, if tenants were organized and united, with the backing of the wider working class and the labor movement, the government would be forced to make concessions to renters. On May 1 and then on June 1 if a majority of tenants refuse to pay rent, the government will not be able to sit on its hands. Half of all the units in the US are owned by large corporations and half by small landlords. Small landlords, as well as all homeowners, should have their mortgage payments frozen. Corporate landlords, the banks, and Wall Street should be the ones paying for this crisis of their system, not ordinary people.

The demand for an immediate end to all rent payments during the crisis is a winnable demand if we get organized and fight back. All levels of government should be pressured to forgive not only all current payments, but also all back rents and late payments. The time for such a movement is now.

The Struggle Going into the Summer

Given the breadth and depth of this crisis, and the cuts to public services, the courts do not want to be overwhelmed with cases. Mass eviction court cases, from the establishment’s perspective, would only further politicize and polarize the existing stresses in society. The courts are under pressure to not be seen as working for the landlords. Sheriffs evicting tenants who were told to stay home without incomes would seriously undermine the authority of all bodies of the government. But we shouldn’t rely on this. Our best defense is to get organized, using all the tools at our disposal, including online mass meetings like the one organized by Rent Strike 2020 on March 31. Demonstrations of dozens or hundreds against evictions, utilizing social distancing, is possible.

When evictions eventually resume, then mass demonstrations are key to preventing evictions. Politicians may look to avoid a social explosion, which may include interest-free loans for rents, however, forcing politicians to take action to forgive missed rent payments altogether should be our goal.

The key historically to successful rent strikes has been organization. There are no shortcuts. For tenants to survive this moment economically, without going into the next years with devastating mountains of debt, collective action is the best defense. As part of carrying out the May 1 rent strike and going forward, we must work to get organized on a building and neighborhood level while we simultaneously build a national movement.

There will be many differences in tenant rights from one state to the next. Organizers will need to know the legal rights in their city, and should work together in their local Rent Strike 2020 groups to prepare a strategy to build an effective rent strike and fight for and end to rent payments during the crisis. Many landlords are big corporations, some own just one unit. Some landlords will be more brutal than others. Through the process of organizing all this will be learnt. Some 42% of tenants live in buildings with more than five units. A third of renters are in single family homes. Organizing is always possible and generally everyone has neighbors to reach out to.

Socialist Alternative internationally has led many fights under the slogan “Better to Break the Law than Break the Poor.” This was the slogan of our sister organization in Britain when we were in the leadership of the Liverpool City Council in the 1980s; it was what we argued when we led the mass movement against Water Charges in Ireland in the 2010s; and it characterized our approach in fighting the hated Poll Tax in Britain in 1990 where 10 million people refused to pay.

In Seattle, our city councilmember, Kshama Sawant, was first to demand and help establish a rent moratorium, and is fighting for the state governor to forgive all rent and mortgage payments for the duration of the crisis, with no back payments owed, and no rent increases through the end of 2020. This is a moment where the escalation of inequality can be successfully challenged. Conversely, if we do not organize, it will be a moment that will result in working people being even further crippled by debt and the loss of remaining economic security.

We are entering a period of massive upheaval. The success or failure of the period ahead depends on the scale and level of organization of working class people around demands that meet the real needs of renters. Capitalism is an organized system that helps landlords and bosses take everything from us. And they are terrified that the crisis will more blatantly expose them for who they really are and what they do. The heroes today are not the entrepreneurs who have created a phone app. The heroes today are the nurses, the grocery workers, the frontline mostly blue collar workers. The world has temporarily been turned upside down.

In this upside down world, many workers will ask, Why have I for decades been giving the landlord half my paycheck every week? It’s almost feudal. This is capitalism in the twenty-first century. We need a nationwide rent strike on May 1 not only to take urgent action in this crisis, but also to build the fight for a socialist world.