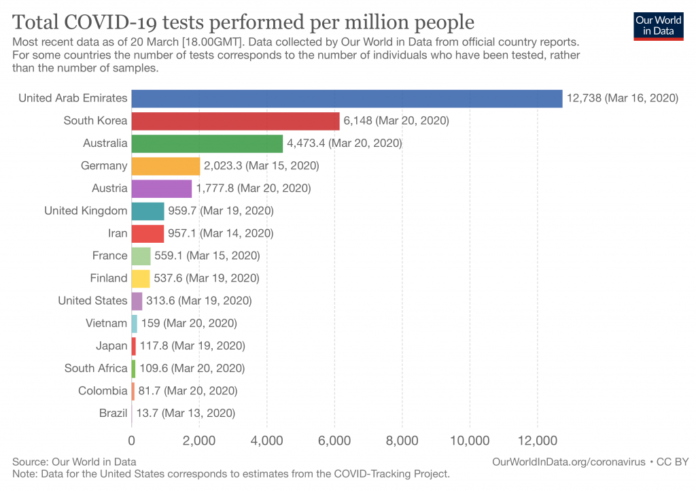 It is necessary to test millions of people every day

Guest article by Florian Licht, postgraduate student in biology. A longer version of this article was first published on March 24 on sozialismus.info in German language.

Countries like South Korea [1] and Singapore [2] have set an example in successfully combating Covid-19 using a mass testing strategy. Virologists and epidemiologists have argued for a huge increase in testing for quite some time now, and the WHO reiterated this message by publishing a strategy paper [3] clearly recommending all countries to increase testing. With a total of 100,000 tests performed in 47 laboratories across the country (March 16-20) [4], Germany is doing more testing than many other countries. Nevertheless, this is not enough; South Korea has performed three times as many tests per million people compared to Germany (see graph).

For protecting health care workers and other workers highly exposed to the virus, as well as vulnerable people and people with underlying conditions, it is necessary to test millions of people every day. In the following, I will explore the short-term possibilities to increase testing capacities in Germany.

How does the coronavirus test work?

There are several different test methods available for detecting SARS-CoV-2, and scientist are working furiously to develop new methods that are even faster and more practical. The most common and accurate method at present is the so-called quantitative Polymerase Chain Reaction (qPCR) test. In simple terms, it attempts to detect the genetic material of the virus in the sample. To do this, the sample is mixed with certain reagents and placed in a so-called qPCR machine. In principle, the qPCR machine is simply a device that heats and cools the samples to specific temperatures in several cycles. In this process, the genetic material of SARS-CoV-2 is multiplied (provided the sample comes from an infected person). In addition, the machine can measure how fast this amplification takes place, which in turn allows quantification of the initial amount of virus in the sample. This method provides you with results in a matter of hours.

The most important items for performing a qPCR test are the swabs for sampling, the test tubes for storing and transporting the swabs, the reagents and the qPCR machines. In addition, trained personnel and laboratories suitable for working with the dangerous SARS-CoV-2 virus are required.

Both qPCR machines, the necessary reagents, and trained scientists are available not only in the 47 institutes currently conducting the tests, but in virtually every university where research in the field of biology takes place. There is probably at least one qPCR machine not only in the department of microbiology, but also in the institutes of botany, genetics, biotechnology or ecology. The qPCR method is used on a daily basis. Every biology student with a bachelor’s degree is familiar with it, not to mention the numerous PhD students and research assistants.

The following example illustrates the extend of testing capacities that could be mobilized: at the request of the UK government, the University of Nottingham — which has not generally responded quickly to the current crisis — was able to source over 16 qPCR machines from its inventory within 24 hours. In addition to that, kits and reagents worth £millions were handed over, and over 600 students have volunteered to help out in the local hospital and research facilities. If these 16 machines are worked continuously, 30–40 runs of 35 samples each can be performed per day. That makes 20,000 tests per day [5]. So using only the machines at Nottingham University, it is possible to perform as many tests per week as were carried out throughout Germany in the week from March 16 to 20, namely 100,000. As already mentioned, there are not only 16 but approximately hundreds of available qPCR machines in Germany.

The necessary reagents are currently in great demand and their production has to be increased [6]. The majority of the reagents are manufactured by a few companies, e.g. Roche, Qiagen or ThermoFisher Scientific. It is likely that these companies have already started to ramp up their production — but that is not enough. These reagents and related materials are sold at high prices. Most laboratories have a tight budget and therefore try to produce their own home-made reagents. It would therefore be necessary to immediately disclose all formulations, protocols and patents relevant to the fight against SARS-CoV-2, so that everything necessary can be duplicated worldwide.

To collect samples, only relatively simple items are required; these should not be the limiting factor. For comparison: In Germany, more than 300 million disposable plastic bottles are being used every week. It is hard to imagine that in a heavily-industrialized society there would be no capacities for the short-term production of several million cotton swabs and plastic tubes.

There are no exact figures on the quantity of reagents and the number of qPCR machines. But even a conservative estimate shows that in Germany it must be technically possible to carry out several million tests per week.

Many scientists and research institutions understand that every day counts and have offered their skills and equipment for the fight against SARS-CoV-2. Experts from all countries volunteer and network with each other [7] [8]. Around the world, scientists are publishing new methods to fight the virus, such as a specific “antibody test”. When asked how quickly this test can be applied on a large scale, the author of a new study replied on Twitter: “Depends on how fast people act locally. Don’t wait for governments. Set it up in your hospital!” [9] [10].

Although the government claims that everything is being done to combat the virus, it failed to put the potentially available capacities for mass corona testing at the service of virus control. This should have happened several weeks ago. However, expanding the testing capacities also includes organizing the logistics for sampling and distribution. The evaluation of results must be coordinated centrally. At the same time, it must be ensured that the tests can be carried out with high quality and in compliance with biological safety standards.

Knowing what testing capacities are available in principle will hopefully increase the pressure on Governments to achieve the use of millions of tests.

This article was first published on March 24, 2020. On March 27, the German government announced a plan to ramp up testing-capacities by which it will be possible to perform 200,000 tests per day at the end of April. In the midst of a pandemic, this is not ambitious enough, both in terms of numbers and timescale. As outlined in this article, by mobilizing all capacities, it is possible to carry out several million tests per week. This not only holds true for Germany, but for other countries around the world as well.