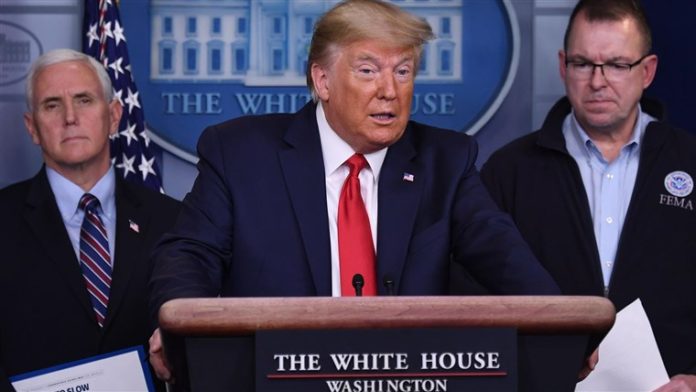 The stimulus package signed by Trump at the end of last week totals to an unprecedented $2.2 trillion. While most of it goes to big business, there are some important provisions for working people. Taxpayers earning up to $99,000 will be receiving up to $1,200, unemployment benefits are extended, and increased by up to $600 a week, and extended to gig and contract workers. In addition, hospitals are buoyed by $130 billion, state budgets receive a subsidy, and $367 billion is reserved for small businesses. This is still far, far short of what working people are going to need to get through the biggest economic crash since the Great Depression with a record 3.2 million new unemployment claims last week alone.

But if you thought $2.2 trillion was huge (and it is), you’re missing what the corporate media refuses to explain: there’s an additional $4.2 trillion being given to big business! It’s not just that working people’s checks amount to a measly 11% of the stimulus package, but that the headline numbers are far from the whole story. In fact $4.7 trillion is being made available to big business compared to the $250 billion for payments to working people. This reduces working people’s share to just 4%!

This is a robbery.

In 2008, hundreds billions of dollars were handed out to corporations with almost no strings attached while millions of Americans were thrown out of their homes. Ultimately trillions were spent to prop up the banks. In 2020, Trump, the Republicans, and the Democrats have recreated this crime. Originally, Trump and the GOP wanted to keep the details of the corporate handouts secret! The Democrats managed to fight for a small control board – basically the same level of oversight as in 2008 – and the prohibition of stock buybacks for just one year – let’s call these victories what they are: window dressing. At least now working people will be able to (maybe) find out who’s benefiting from this huge giveaway.

Following the 2008 stimulus, decreased tax revenues flowing from unemployment led the corporate politicians to implement extreme austerity. This time around, Keynesian measures – including putting money directly into the pockets of working people have started – and will likely need to be continued not because the corporate politicians suddenly care about us but in an effort to prevent an even bigger economic collapse. The bosses’ favored tools of  monetary policy – lowering interest rates and the Fed pouring money into the financial markets – are not working the same way they did in 2008.

Nor will working people accept austerity the way they did following 2008 – the experience of the subsequent “recovery” going to the super rich has left its mark. If they tried in coming months to cut health care spending for example it would lead to ferocious popular pushback. But no one should be under the illusion that Trump, the Republicans, or corporate Democrats plan to have big business pay for this stimulus.

“What exactly did the 2008 bailout get us anyway?” Working people are asking themselves this question as they read about the 2020 stimulus. And the answer is that it kicked the can down the road. It rescued big banks who bought up con-artist home loans while kicking people out on the street. Twelve years later, none of the problems of the world economy have been addressed, and so the crisis has returned.

The media continues to play its role of selling this bill to the American public. Making payments to working people out to be an unprecedented generous gift, it downplays the amount given to big business. Fox News cynically refers to it as a “Relief Package” on its homepage. They are attempting to sell a bill that gives corporate handouts by saying it will give relief to people wondering if they’ll be able to pay rent and buy groceries in April. Alexandria Ocasio-Cortez exposed the lie tweeting “there is absolutely no good reason why Senate Republicans are tying a historic corporate giveaway to getting relief money in the hands of families.”

Bernie Sanders and AOC made a mistake by not organizing against the stimulus package, bringing the enormous amount given to big business into public knowledge. Their positions could have been used to shed more light on this and they should have campaigned for a “no” vote.

Certainly the payments to small businesses and working people can be a true stimulus to the economy. At the same time, there’s the real question of what corporations will do with this stimulus. Even before this handout, the corporate economy was awash in cash that capitalists didn’t know where to invest. As long as the coronavirus lockdown continues and the gears of the economy are slowed, where will this stimulus actually go? In the case of Boeing, other financing options were available as the CEO announced he would only take the government’s money if the right conditions were met. The Fed is also pouring trillions into the markets and yet there seems little guarantee that these moves will be successful in avoiding a full-blown crisis.

Devil’s in the Details

Alongside the majority of this package that is a brazen corporate handout, it includes: $130 billion for hospital coronavirus relief (that’s 5% of the package); $367 billion in small business loans; an extension and expansion of unemployment benefits; $150 billion to go to local governments; and the $250 billion in direct payments to workers.

Of course, it doesn’t end there. Politico reports several of the strange provisions that made their way into the final bill. This includes fast-tracking “innovative sunscreen,” harbor dredging help, and allowing casinos to get part of the bailout! The New York Times identified a section of the bill that could give real estate tycoons tax benefits worth up to $170 billion.

Not included in the bill? Treatment for coronavirus for the uninsured or underinsured. Any provision to protect pensions. A way to address the children who rely on meals at school for nutrition – no increases to SNAP benefits.

Even the payments to working people have serious problems. The one-time $1,200 payments will not be enough to stave off rent, bills, and food and it is likely further relief will be needed. Also, the payments will only go to people who paid taxes with Social Security Numbers last year, leaving out the poor who didn’t file, legal immigrants, as well as the millions of undocumented workers who didn’t file a tax return.

Bernie Sanders and others point out that as long as working people are suffering due to the coronavirus lockdown, they should receive $2,000 per month payments to prevent falling behind on rent, bills, and being able to feed themselves and their families. How much would that cost? If it was checks to all 330 million living in the U.S., it would come out to $660 billion. Multiply that by a conservative estimate of four months and you get $2.64 trillion – still less than the amount being made immediately available to big business.

Big business has now admitted who the “essential” workers really are. They are the people who can’t work from home and that corporations are still working through the shutdown. Truck drivers, nurses, warehouse workers, grocery store workers – all facing the hazards of COVID-19 without adequate PPE. We are in need of a real relief package that doesn’t cut in the super wealthy and biggest corporations.

Bernie Sanders and AOC pushed back against aspects of the bailout for big business. Sanders lacerated Republicans for trying to strip out the increase in unemployment benefits. While Bernie and AOC were under enormous pressure to vote for this bill because to do otherwise would have been presented as stopping desperately needed aid for working people, voting for it was still a mistake.

But this is far from the end. Already the media is discussing the next stimulus bill which will certainly be needed. Bernie and AOC should now be campaigning to make sure big business doesn’t get another cent of taxpayer money. There is huge anger among working people against bailing out the billionaires, against this for-profit health care system, and the profiteering around medical supplies. Also ordinary people are asking: what will the country be like at the other end of this crisis given the economic catastrophe that will continue to play out even when coronavirus is contained. Bernie and AOC should be calling for a massive public works program to rebuild the nation’s infrastructure on a green basis. This would create millions of jobs and address the even bigger threat we collectively face: climate catastrophe.

As Socialist Alternative wrote, an immediate program for working people in this crisis includes fully funded free health care for all; a guaranteed minimum income of $15 an hour or $600 per week for the length of this crisis; and a freeze on all rent and mortgage payments. Any corporations asking for a handout should be taken into public ownership and control to make sure they are run for the good of society, not for the profits of their shareholders. The free market has failed us in the face of COVID-19 and now Trump and the corporate politicians are shelling out trillions to save the companies and the conditions that got us here. We need a socialist system that prioritizes human health, safety, and needs. This system of profit has to go.