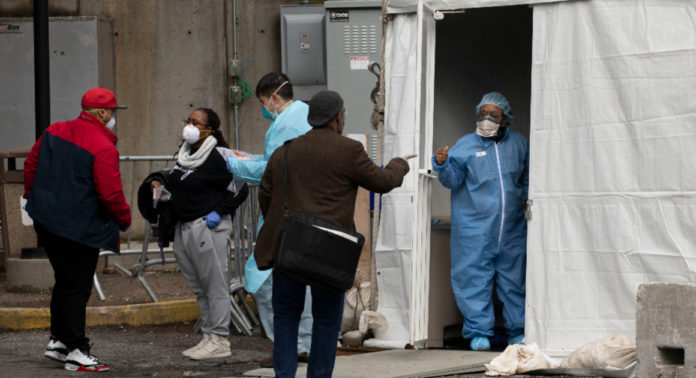 The world has been turned upside down. Millions of working people are now facing a risk to their health and livelihood because of the deadly COVID-19 epidemic and a collapse of the capitalist economy on a scale even bigger than the Great Recession of 2008-9.

The twofold crisis of the pandemic and economic collapse are presented as the result of an unpreventable “act of God.” But in fact epidemics have increased fourfold globally in the last fifty years due primarily to environmental destruction. This pandemic was entirely predictable and in fact was predicted by scientists. What was certainly not inevitable was the total lack of preparation.

What has really been exposed in the U.S. and in Europe is the devastating effect of cuts to public health care resources combined with privatization. Neoliberalism which massively increased social inequality is now set to take an even bigger toll.

And while coronavirus is the trigger for the economic crisis it is also exposing the enormous fragility of the world economy which was already teetering on the edge of a recession with none of the underlying problems that caused the 2008-9 crisis resolved. Now Trump and the capitalists are being forced to pump hundreds of billions into the economy including directly into the pockets of working people. This is not because of a sudden concern for our fate but to save their system from complete collapse. And their measures will only slow down the crisis not solve it.

This is a crisis created at all levels by the diseased system of capitalism where the needs of the vast majority are subordinated to the dictates of profit for billionaire hoarders.

China is now presented as the “model” for how to contain the virus, but the truth is that the brutal state capitalist regime covered up the virus in late December and early January while persecuting whistleblower health care workers thus losing the opportunity to contain the outbreak at the start.

Trump has matched the criminal behavior of the Chinese regime by denying that there was any threat for weeks on end and doing nothing to ramp up testing or prepare the health care resources necessary if this could not be immediately contained. He seeks to deflect by whipping up xenophobia, calling coronavirus the “China virus.” As a result of the criminal negligence of this delusional egomaniac, thousands and probably tens of thousands will needlessly die.

Trump is now considering “reopening the economy” and urging people back to work in April in order to prevent a deeper collapse on Wall Street. This is against the near unilateral advice of health experts. In response to this, as we went to press the hashtag #NotDying4WallStreet went viral on Twitter as people expressed outrage at a system that would so blatantly put profits before people.

But it’s not just Trump. The Democrats in Congress, and at the state and local level, with honorable exceptions, have been complicit in maintaining what is dangerously close to a code of silence about the true scale of the impending crisis, while physicians and epidemiologists globally have gone hoarse ringing the alarm bells.

Even now, as we go to print, the U.S. has only tested 125 people per million, compared to 5,000 per million in South Korea which had the first outbreak after China and where it has been relatively contained at least for now.

Decades of capitalist policies, designed to maximize profit with no concern for consequences for society or workers, are responsible for the vulnerable state we are now in. Long supply-chains and cuts in public hospitals have left us totally unprepared to deal with this crisis.

We now face an immediate, severe shortage of safety equipment in hospitals, a woeful lack of testing equipment and a complete lack of any preparedness for this pandemic.

Workers across the country have been pressured by their bosses to step up despite a complete lack of safety equipment. Front-line workers like nurses, supermarket cashiers, truckers, warehouse, and delivery workers should not have to compromise their health in order to help society and receive a paycheck. We need strong unions to fight for safety measures, rights on the job and increased pay for workers at risk.

Full Pay for the Unemployed

Working people are not to blame for these twin crises. However, under the logic of capitalism, it is workers who will face the greatest hardships, while the super-rich CEOs and billionaires, whose policies provoked this crisis, are given trillions in government bailouts. And now it is being revealed that senators were dumping millions in stock when they got early warnings about the scale of the coming pandemic.

Neoliberal policies promoted by capitalist politicians have gutted public education and public services generally in past decades. As Bernie Sanders has pointed out, the lack of a Medicare for All system has left the public unprotected from this pandemic. Half of working-class families do not have the resources to deal with a $400 emergency. These capitalist politicians  deserve nothing from us. We need to be prepared to take decisive measures against those who got us into this mess.

Capitalism has Failed – for a Socialist Society

The 2020 Wall Street crash and attacks on living standards and social programs for workers are a direct result of the logic of capitalism. We can’t expect the capitalist system to do anything other than maximize the wealth of the billionaires who hoard resources and aim to make money from our misery. This crisis has exposed who really keeps society running: nurses, warehouse workers, grocery store workers, delivery drivers. We demand that the resources of society be democratically planned by those of us that do all the work – the majority. This means challenging the rule of the billionaires and taking the levers of power from their hands.

This can only happen through public ownership of the wealth of the largest banks and corporations and for the economy to be democratically planned by elected representatives of the working class in the workplace and the community. The need for a socialist transformation of society has never been more urgent.

We Need a New Party to Address the Crisis

Working people can still take action to change things! Online petitions, strikes, workplace organizing and other efforts have drawn concessions from the Democrats and Republicans at the federal, state and local levels. The more we demand and fight for, the more they will be forced to concede. At the same time, both parties’ leaderships are bought and paid for by the billionaire class, and they will do what it takes to prop up the same billionaires who put us in unsafe workplaces, refuse to pay their taxes, and aim to profit from our death and suffering.

The Senate has passed a massive stimulus bill that includes $1,200 one-time payments to most adults and a significant extension of unemployment insurance. But it also includes a $500 billion bailout for corporate America. At the same time the Federal Reserve states it is prepared to pump literally $1 trillion a day into the financial markets if necessary.

The government has already given trillions to prop up Wall Street which gambles on our lives. This didn’t prevent economic collapse. The only reason they’re now giving workers some assistance is to try to prop up the capitalist economy. Trump is posing as a populist strongman, and we oppose any attempt to militarize society or whip up nationalist hate against people of color or immigrants. The enemies of working people are the billionaire hoarders and their representatives from both parties, not immigrants or workers from other countries. We can’t let the rich demonize the sick and vulnerable and let the billionaires who created this crisis off the hook.

We will need to depend on our own strength, commitment, and organization to get through this crisis. The Democratic Party blocked Bernie Sanders, the only candidate with a program and a movement that could seriously address the crises working people face. Their backing of Biden gives Trump an opening to pose again as the more anti-establishment candidate addressing this situation despite the fact that he suppressed testing for months and has overseen the capitalist recklessness that intensified this tragedy.