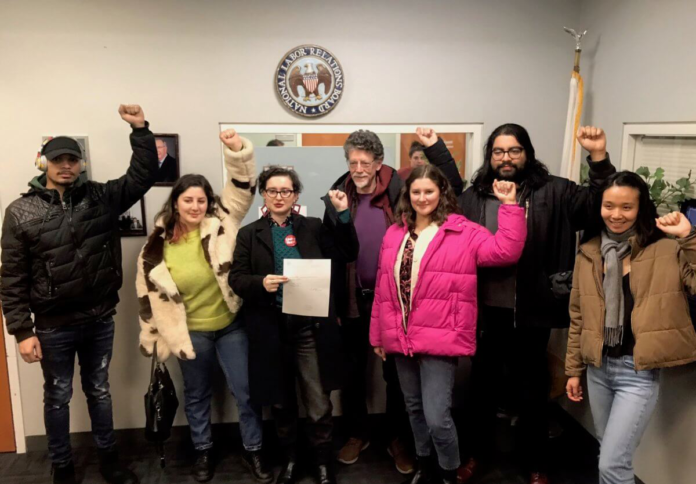 On Friday, February 14, a group of Housing Works employees and representatives from the Retail, Wholesale, and Department Store Union (RWDSU) made the short walk from the nonprofit’s Downtown Brooklyn headquarters to the local office of the National Labor Relations Board (NLRB) to file for a union election.

The filing came a day after a delegation of workers, representing the nearly two-thirds of nonmanagerial staff who had signed union authorization cards, were rebuffed by CEO Charles King in their request for voluntary recognition of the union. These developments represent the culmination of year-and-a-half-long unionization effort by workers at the progressive nonprofit which serves and advocates for low-income and HIV-positive clients across the city.

Since the union campaign went public internally over the summer, Housing Works maintained that it would remain neutral towards workers’ efforts to unionize. And while management allowed union organizers access to the facilities for several months, they also retained their union-avoidance law firm (the same firm defending Harvey Weinstein against sexual harassment claims), initiated an internal “positivity” campaign, and repeatedly put forward unfair red lines in their negotiations with RWDSU over a neutrality agreement.

After negotiations broke down in October, more than 100 Housing Works employees from across the city staged a walk-out to speak out about working conditions and to demand that management take the unionization process seriously. After intense pressure from workers, the press, public officials, and members of the public, Housing Works returned to the bargaining table only to return to their familiar pattern of moving goalposts and attempting to control the discourse within the organization.

Most recently, Housing Works demanded that any neutrality agreement not only forgo voluntary recognition in favor of a mediated election, but that the election effectively count any non-votes within the bargaining unit as votes against the union. Accepting this arrangement would have set a terrible precedent for the labor movement. Rather than be hamstrung by a “neutrality agreement” less favorable than what the law allows, workers decided to demonstrate the union’s overwhelming support and file for an election with the Trump-controlled NLRB.

The union and the organizing committee had sought to avoid this outcome for two reasons. First, a good-faith neutrality agreement could have avoided a public fight and given Housing Works the opportunity to show that is progressive values extended to workers’ rights to self-organize. And second, an NLRB election could have left the door open for Housing Works and its right-wing lawyers to meddle in the election process, for example by challenging the size of the bargaining unit. As this article goes to press, Housing Works has begun indoctrinating supervisors using classic anti-union propaganda and has banned union organizers from the premises based on unsubstantiated accusations that organizers disrupted workplace activities and pressured staff to support the union. In the face of such behavior by Housing Works and with a clear majority of support, the dangers of waiting any longer outweigh any dangers workers might face with the NLRB.

Despite the disappointing behavior of Housing Works management, there is progress toward recognition for the Housing Works Union. Over the coming weeks, the organizing committee and union organizers will prepare workers for the more overt union-busting we can expect to see from management. More importantly, we will begin preparing for and envisioning the next stage of this fight: winning a contract. As we discuss and concretize our demands with our coworkers, we can begin to build the accountable, transparent, and democratic Housing Works we and our clients deserve. And with the support of our coworkers and communities and a clear radical vision, we will be ready for whatever struggles we face along the way.