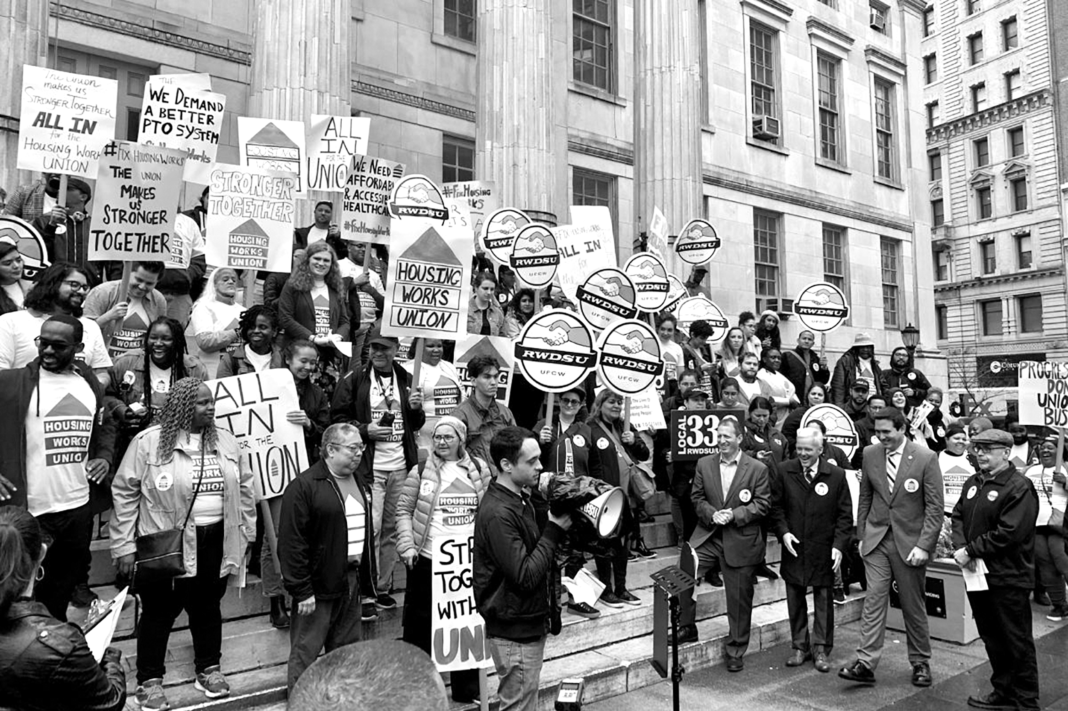 For more than a year, workers at Housing Works, a nonprofit organization of about 800 employees spread across New York City, have been working to build a union.

Our organizing effort started late in the summer of 2018 with a half dozen or so workers meeting now and again over pizza to talk about our workplace conditions. From the beginning, this group included workers of all stripes – medical receptionists, custodians, case workers, and attorneys. Despite our differences, the fact was that we all worked together in the same buildings with the same clients, and our concerns were largely the same – things like our time off policy, health care, pay, workloads, health and safety, and job security.

By the holidays, our group had grown and we connected with the Retail, Wholesale, and Department Store Union (RWDSU) to start getting advice on how to go about forming a union at our workplace. By coincidence, the union had already been meeting with workers at the Housing Works bookstore which, along with several high-end thrift shops, forms part of the “social enterprise” side of the organization, raising revenue to help deliver the organization’s other services. As we started sharing stories with workers from that side of the business, we found that many of our concerns about the direction of the organization overlapped, with bookstore workers reporting overwork, unsafe working conditions, and an increasing reliance on volunteer labor.

Housing Works, which includes workers in fields as diverse as health care, harm reduction, case management, housing, prison outreach, job training, youth services, legal, custodial work, warehouse work, and retail, is a place rife with contradictions. On the one hand, the 30-year-old organization boasts sterling progressive credentials. It was founded by members of ACT UP, the radical grassroots organization that used radical, direct action to break the U.S. government’s deadly silence on the AIDS epidemic. It was a leading voice for the “harm reduction” and “housing first” models of drug treatment – both now widely acknowledged best practices, but were highly controversial even a couple of decades ago. And it wears its progressivism on its sleeve, with staff members often at the epicenter of protests and arrestable actions in support of a whole host of issues including ending the HIV epidemic, LGBT rights, housing justice, criminal justice, and immigrant rights.

But when you look closer, this loud and proud progressivism only underscores the difficulty of using a nonprofit model to deliver real change under capitalism. Building a nonprofit like Housing Works means finding new revenue streams, cutting costs, and making friends in high places. These realities have in some ways embedded the organization in the very systems of oppression it seeks to destroy. And for workers, this approach to social justice often comes with a personal cost, with low pay, broken benefits, and a lack of transparency driving an annual turnover rate of around 30 percent.

Workers at Housing Works have found ourselves faced with a choice: to stay in our jobs and burn ourselves out or to leave behind our clients and coworkers to find new jobs that either come with the same problems or offer less opportunity to make a difference. Faced with that grim choice, many of us have worked over the past year to carve out a better option: organizing a union.

Through the spring and summer, we grew our numbers and expanded to new sites. While the day-to-day work of recruiting our coworkers was our responsibility, having the support of the union was a big help, with organizers stationed near many of our sites once a week or more to meet with workers, explain the unionization process, and collect union authorization cards.

By late July 2019, our organizing committee was strong enough that we instructed RWDSU to approach Housing Works management seeking a neutrality agreement. This agreement would have allowed us to organize openly without interference from management while allowing Housing Works to live up to its progressive reputation and avoid a public fight with the union.

But that’s where things got a little weird. Management claimed internally that they would be “neutral” toward the unionizing effort, and in fact did allow union organizers to come on site to organize workers on their lunch breaks. But they also unilaterally informed around 200 workers that they were “supervisors” and therefore ineligible for the union. They also launched an internal positivity campaign to explain why our benefits and workplaces weren’t actually so bad after all. And most importantly, they didn’t sign a neutrality agreement. On the contrary, they hired one of New York’s most notorious “union avoidance” law firms to fight back against us.

On a drizzly day in October, with no neutrality agreement in sight, we went public with our campaign. Around 100 workers from across the city walked off the job for three hours and held a rally on the steps of Brooklyn Borough Hall demanding that management address our concerns and recognize the union. After almost a year of organizing, the rally gave us the chance to speak openly about our concerns and to put forward our vision for what Housing Works could be with real democracy and worker power. The New York Times and other media outlets publicized our campaign and cast a harsh spotlight on an organization near and dear to the city’s progressive establishment.

Since the public launch, workers have continued to escalate with a series of smaller direct actions and have taken over management’s internal town hall meetings to demand a serious response to our demands. Management has also found itself increasingly under fire from its own allies in the Democratic establishment after more than 50 state and city elected officials signed a letter in support of our campaign.  As this article goes to press, Housing Works management and the union have returned to the bargaining table and workers continue to build power one day at a time.

Socialist Ideas A Guide to Action

Being a part of this campaign has been an incredible opportunity to see the political ideas of Socialist Alternative and other Marxists played out in real time. Even a year and a half ago, I never would have imagined myself being a part of a serious labor struggle. I grew up in North Carolina, which was the least unionized state in the country until just a couple of years ago, and I’ve worked in at-will workplaces all my life. Unions for me always were always good political theory – something other people had, something we should all have ideally, but not something I ever seriously thought I’d be a part of.

So what’s been surprising about all of this is that from the outset, every step of this campaign has felt completely natural, and at times even predictable. I owe that to my years of experience as a member of Socialist Alternative and the insight and advice of my comrades. Management, in spite of its liberal credentials and all the opportunity in the world to save face, chose to do what management always does in the face of worker power – it grasped for control. But at the same time, our workplace went from being a place of demoralization and acquiescence to one of solidarity. People who said a few months ago that things would never change have become leaders in the campaign. When people were given a better alternative, most of them took it with very little need for further argument or explanation.

No matter where this campaign goes from here, hundreds of workers will have had the experience of standing up, fighting back, and taking power. Our campaign is happening in the context of a resurgence in strikes in the U.S. as working people begin to gain the confidence to fight and win for our demands. The union drive at Housing Works only adds to the growing evidence that further working-class struggles are to come. To win, we will need to be prepared with socialist strategies and tactics gleaned from years of working-class experiences. With radical leadership and powerful working class institutions we have a world to win.