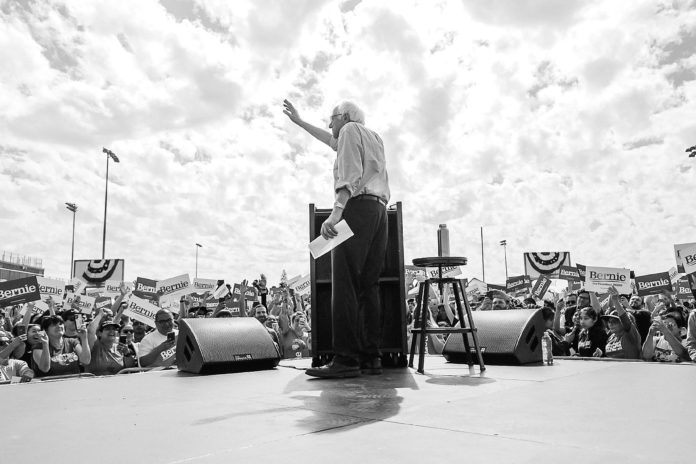 Bernie Sanders’ political revolution is gathering steam. He became the first presidential candidate in either major party to win the popular vote in all three of the first caucuses and primaries. After winning in Iowa and New Hampshire, he went on to a crushing victory in Nevada with more than twice the vote of the number two candidate, Joe Biden.

The Nevada outcome shattered many of the claims about the limitations of the Sanders campaign peddled by the corporate media. First and foremost was the ridiculous claim going back to 2016 that Sanders only appeals to white voters. Sanders won 51% of the Latino vote in Nevada with Biden a distant second at 17%. He is now leading in national polls with people of color, Latinos particularly, but also young black voters.

In fact, Sanders won every demographic group in Nevada including men and women and younger and older voters. We know that in national polls, he dominates among voters under 30 but it is also very striking that his support is concentrated among working-class people. He won 40% of Nevada caucus goers without a college degree, 13% points more than his total among those with a degree. Likewise in national polls, he is generally most popular among Democratic voters making less than $50,000 a year, and least popular among six-digit earners. This helps to explain how Hillary Clinton can honestly say “nobody likes him”; indeed none of her wealthy friends like him.

Sanders is also beginning to expose the idea that he has a “ceiling,” a number that he allegedly will not be able to break through because his “democratic socialist” ideas are too radical for most ordinary people. In fact, what is being demonstrated is that Sanders’ pro-working-class platform has enormous appeal including his call for Medicare for All, cancelling student debt, a $15 minimum wage, strengthening workers’ rights to organize, national rent control, ending racist mass incarceration policies, and the Green New Deal.

In both Iowa and New Hampshire, exit polling showed nearly 60% support for Medicare for All. In Nevada, most members of the heavily Latino Culinary Workers Union rejected the union leadership’s call to oppose Sanders and Medicare for All.

The Democratic establishment is in a complete state of panic fearing that Sanders’ momentum could become unstoppable. They are prepared to go to enormous lengths – including a so-called “brokered” convention – to stop him. This would arise if Sanders won the most delegates but not a clear majority. On the second ballot at the convention, according to current rules, delegates would be free to get behind a “consensus candidate” imposed by the establishment to stop Sanders. The Democrats also have over 700 unelected “superdelegates” – party officials who can be brought in to tip the scales.

This would provoke fury among millions of people. It would be an even clearer theft of the election than the rigged primary of 2016 where the Democratic National Committee basically acted as an adjunct of Hillary Clinton’s campaign.

Why are they prepared to go to such lengths? First and foremost because Sanders’ campaign speaks to the interests of working people; the ruling class whom the establishment serves absolutely does not want an “organizer in chief” in the White House. They understand very well that Sanders’ 2016 campaign helped inspire many of the educator activists who sparked the Red for Ed revolt starting in West Virginia in 2018. Again, even though they strongly oppose Sanders’ platform their bigger fear is that a Sanders presidency could help detonate a wave of class struggle and the full reemergence of a fighting labor movement.

It is certain that the Democratic Party’s corporate donors would prefer a second term of Trump rather than Bernie Sanders. Many Democratic donors on Wall Street as well Bill Gates have come out openly and said they would prefer Trump to Elizabeth Warren who represents far less of a threat to their interests!

The debate in Nevada right before the caucuses was a decisive event watched by 20 million people. Many in the Democratic leadership were clearly hoping that Michael Bloomberg was the solution to their problem, the heavyweight who could take out Bernie. Instead he imploded on stage.

In reality it was never likely that the multi-billionaire former mayor of New York who supported George W. Bush in 2004 and who oversaw the massive “stop and frisk” program which targeted black youth in the city would appeal to the base of the party once they got to know him. As Krystal Ball of The Hill’s Rising show put it, thinking that Bloomberg is the way to beat Trump “is like thinking the problem with Hillary Clinton is that she was not closely enough associated with the Iraq War and not cozy enough with Wall Street” (2/14/2020).

If the establishment were to impose Bloomberg at the convention it would lead to millions refusing to vote for the party and an almost certain Trump reelection. It’s just a measure of the desperation of the party elite that they seriously entertained the idea that he was their savior.

Of course Bloomberg has an endless supply of money and will stay in the race despite the thumping he received. But the debate also showed that the other candidates were unable to land a solid blow on Sanders, now the clear frontrunner. Why not? Conservative New York Times columnist David Brooks recently argued that Sanders had developed a successful “us versus them myth” but that none of the other candidates “have the categories or mental equipment to take down a socialist like Sanders.” He added that “Saying his programs cost too much is a pathetic response to a successful myth” (2/20/2020).

Sanders points to the conflict of class interests and capitalism’s failure to provide for the basic needs of large parts of the population. This is not a myth; it’s reality. But Brooks is pointing in his own way to the deep problem of credibility that the corporate establishment has in this period. In terms of ideological presentation they’ve not moved beyond the actual myth promoted by neoliberalism of a “post-class” society. Neoliberalism is bankrupt in a society where inequality has reached levels not seen since the “gilded age” of the late 19th century. Their second line of defense is corporate identity politics which clearly has only limited appeal. The Democrats’ last resort is red-baiting which in this day and age is just an admission they’ve lost. The only real alternative in American politics to Sanders appeal to working class solidarity is Trump’s right populist “America first” nativism.

This is also why Sanders is the candidate with the best chance to beat Trump. It certainly isn’t Joe Biden or Mike Bloomberg. The final false claim peddled by the corporate media about Sanders was that he was “unelectable.” But this too is increasingly wearing thin. Poll after poll shows Sanders beating Trump by bigger numbers than any other Democratic candidate.

Warren had a good night in the debate against Bloomberg but it wasn’t reflected in the vote in Nevada. Under pressure she has retreated from Medicare for All and her attacks on Sanders on behalf of the establishment have alienated her from many people. Working-class people looking to fight for real change see clearly that Sanders is the one who will be the tougher, more consistent fighter against corporate America.

On March 3, there will be 14 primaries and one-third of all delegates will be chosen. Polls currently show Sanders with a big lead in California and also leading in Texas and most other states. Enormous pressure is now going to come on some of the “centrist” candidates to get out of the race. If they divide the vote and some of them don’t meet the 15% threshold to get delegates this doesn’t help the goal of gathering non-Sanders delegates to be used against him at the convention.

What is vital now is to go all out to get the maximum vote for Sanders and keep the corporate establishment on the defensive.

But we must also prepare for the likelihood that this fight will go all the way to the convention in Milwaukee. That’s why Socialist Alternative is calling for a “million to Milwaukee,” for mass mobilizations in the streets to put the maximum pressure on the establishment to respect the people’s will.

If the Democratic establishment succeeds in stealing the election the situation will be far more explosive than in 2016. Tens of millions would draw conclusions about the nature of the Democratic Party itself and the impossibility of turning it into a party that represents the interests of working people and the oppressed. There would almost certainly be a mass walkout of Sanders delegates and the question would be posed of beginning to take concrete steps towards a new party of, by, and for working people.

But if somehow Sanders overcomes all the obstacles and wins the nomination which certainly can’t be excluded at this stage, this enormous victory would only be the beginning of the struggle. A number of commentators are making comparisons between Sanders’ campaign and Trump’s in 2016 when the Republican establishment made desperate attempts to stop him before capitulating.

It is possible that we are seeing this being replayed. But if Sanders wins not only the nomination but the presidency the next stage would certainly not be analogous. Trump completely took control of the Republican Party over the following two years. This won’t happen with Bernie and the Democratic Party. In Trump’s case, while the Republican establishment loathed him and opposed a number of the positions he advocated, corporate America was generally happy with his tax cuts, deregulation, and anti-China offensive. The ruling class will utterly oppose Bernie every step of the way if he sticks to his guns and mobilizes ordinary people to win his program. The Democratic establishment will do the bidding of the ruling class. A Bernie presidency would therefore even more urgently pose the question of building a new party.

While Bernie has massive momentum, it is impossible to be definitive about what the coming months will bring. What is certain is that the stage has been set for the biggest political confrontation between the left and the ruling class in half a century. History is knocking at our door. Will we be ready?