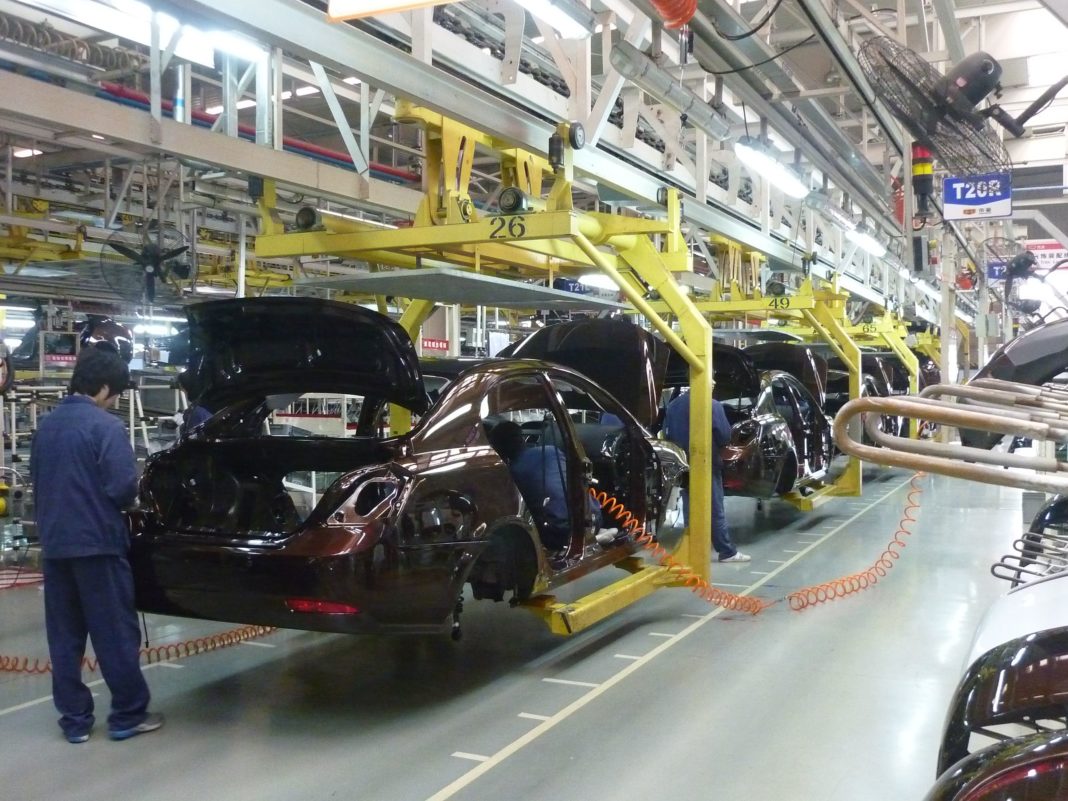 The automobile industry, along with the oil industry, remains the world’s largest and most dominant industrial sector. More than eight million people are directly employed by the auto manufacturers, and millions more work in connected industry. It employs hundreds of thousands of workers in Germany and tens of thousands in Austria. Because of its dominant character, the trends and developments of production, such as locations and technology, can be clearly seen. For the last 100 years, the auto industry has driven many of the technological development of capitalism. At the same time it has been the scene of dramatic workers’ struggles. The auto industry has repeatedly been confronted with overproduction crises, which the ruling-classes have fought with technological innovations, moving production, looking for new markets, increasing sales through build-in obsolescence and fashion changes, and attempting to cut jobs, wages, and benefits.

The global financial and economic crisis of 2008 marked the beginning of a new phase in this cycle. Sales slumped dramatically. Tens of thousands lost their jobs. Temporary workers, a growing feature of the world auto industry, were hit especially hard. The big automakers demanded of their governments financial support, arguing that the collapse of the auto industry would have a knock-on effect, dragging other industries into the abyss. In the US, where the financial bailouts of 2008/09 were given with no strings attached, autoworkers’ contracts were renegotiated to cut costs before any money was given by the state.

In order to revive profits in the auto industry, a number of countries introduced “scrapping premiums” in 2009. Through these programs, state money was given to encourage people to trade in an old car for a newer one, with the old car then being destroyed. In the US, $3 billion was spent on this (the so-called “Cash for Clunkers” program), with Germany spending a similar amount (called “Abwrackprämie”).

Through these measures, as well as increasingly long-term car loans and further cutting labour costs, the auto industry somewhat recovered from 2008. But to reduce production costs, factories were moved to low-wage countries such as China and Mexico.

In 1999, only 3% of all cars where produced in China, by 2007 this increased to 12% and is 30% today. On the other hand, in the last 10 years the global share of vehicles produced in the EU has dropped from 27% to under 20%. However, car sales in China (the world’s biggest automotive market) have been dropping for the past 18 months, potentially signaling a return of crisis. Facing a new crisis the auto industry does what it always did: looks for new markets, asks for state subsidies and makes workers pay. This is behind the process of intense automation, which the auto industry is known for, ranging from Henry Ford’s assembly line over 100 years ago to the using of robots today. This has dramatically boosted productivity: while employees in the auto industry stayed roughly the same from 1970 to 2017, the number of cars produced rose from 16.5 to 96 million per year. But this process — while necessary because of the capitalist competition — is linked to the shrinking profitability (a process that Marx called the tendency of the rate of profit to fall). In their attempt to fight against this tendency on the eve of a new crisis jobs, wage levels and working conditions are again under attack and producers are hoping that electric cars will boost sales.

Especially in this market China is in the lead. Nearly half of the US$300 billion of new investments in electric cars will take place in China. This is one of the reasons behind the conflict between the US and China as well as the desperate attempt of European leaders to motivate and finance industry for new investments. To cover up this process of tightening the belt the auto industries paints the picture of the climate crisis being responsible for job losses — but also a source for new profits.

For decades, the auto giants have used environmental problems to say there is a fundamental conflict between the climate and jobs, that making things “greener” will mean lower profits and therefore job losses. By this method, they have hoped to avoid any restrictions on what they produce or how, regardless of destruction to the environment.

But as acceptance of climate change has become a mainstream idea as has the understanding that something has to be done, the auto companies have started shifting some attention to producing electric vehicles. Daimler, Volkswagen, Audi and others are slowly moving away from the internal combustion engine, but they hope to do it largely with state subsidies, savings programs and by cutting labour costs. They are doing this in the hope of tapping into new markets, to cope with falling profit margins. From their perspective, it isn’t and hasn’t ever been about helping the environment, but rather about overcoming the chronic problem of overproduction.

It is highly questionable if electric cars, instead of gasoline powered vehicles, are even an eco-friendly alternative. But even if they were, the change would be inadequate to deal with climate change in a reasonable time frame. Less than 0.4% of cars on the road are electric and electric car sales made up only about 2.5% of the market in 2019. It would be decades (or longer) before the auto companies decide that it is most profitable to only build electric, and decades more afterward to phase out gasoline-powered vehicles completely. We can’t wait that long. And this also doesn’t address the resources needed to build over 80 million new vehicles every year. Even if they were all 100% electric, the environmental impact of producing so many cars and the energy to run them is massive.

The debate about producing more efficient or fully electric cars is misguided because it does not deal with a more fundamental question, namely the prominence of individual transport. Henry Ford not only introduced the assembly line but, at the same time, pushed the idea of private ownership of cars. In a 1970 German opinion pool, 75% demanded improvements to public transport over public spending on roads. 68% even argued for limiting cars. But the German government, like many others around the world, did the opposite: privatizing and cutting public transport, including closing down rail lines and bus routes to less populated areas that were not profitable. Now, outside of the densely-populated urban areas, individual transportation is the main way most people get around. The concentration of production and services, and the closing of local infrastructure means longer and longer journeys to work and for leisure, so more people rely on a car. Converting some of those are electric ones will not solve the general problem. In addition, electric vehicles will not solve urban congestion and the large area of land used by individual vehicles.

It is necessary to have a massive program of collective, public transportation around the world, with the goal of reducing the need for individual transport. In many cities, it’s easy to imagine how this could be accomplished. A massive expansion of trams, buses, metro and train lines, all of them free at the point of access, would make the lives of hundreds of millions of people easier and make the decision to not drive a car easy. It would also reduce urban pollution, a major killer of people.

Alongside this is reorganizing work, education and leisure so journeys for all activities are shorter. Alongside public transit, walking and cycling would be easier and safer. In reality no one enjoys being stuck in traffic for hours every week on their way to school or work.

Outside of urban areas, it’s a little more complicated. In many suburban and rural areas, driving a car is currently the only way to get to school, go to the supermarket, go to work, and otherwise participate in social life. This is especially true with the elderly and others who can’t drive a car, for whom the question “can they drive?” is really a question of “can they participate in society?”

Building up public transportation, particularly electric buses and public shared taxis, can solve a lot of these problems. But it will also be necessary to start addressing how communities and society are build to reduce suburban sprawl and the unplanned growth and inefficient use of land around cities.

A shift from fossil fuel transport would also involve freight movements. Long distance freight would move on trains or clean-energy shipping. In cities, rail lines could move goods to local distribution depots with the final journey by electric trucks.

The only way to achieve a world where we can stop climate change and urban sprawl, protect jobs and give people true freedom of mobility, is through democratic planning. This can be used to revitalize regional infrastructure, particularly outside of urban areas, and to improve the quality of life.

In a society where human needs are at the centre of planning, rather than profits, we can find a way to balance the need and wish of people to travel from one place to another with the need to reduce carbon emissions. This isn’t just about making it easier to get to work. In a democratically-planned socialist economy, reduced working hours and increased holidays would mean that people are no longer simply in a rush to get to their holiday destination as soon as possible, usually by plane. The trip could be part of the process, something to enjoy rather than something endured to get away from everyday life.

The auto industry’s claim that climate-friendly transportation would cost jobs is just a cover-up for the fact that cutting jobs is a capitalist response to a capitalist crisis. On the other hand, a democratically-planned society would not only reduce the hours of work, without a cut in pay, it would create many new jobs and would change production to eco-friendly methods. Reducing the number of cars produced doesn’t have to mean cutting jobs, if factories are converted to making buses, trains, trams and electric taxis.

To achieve this, it’s necessary for working people to get organized. Trade unions should be at the forefront of this fight. Unfortunately, most current trade union and workplace leaders have accepted the basic premise of capitalism, that the only way jobs can exist is if “their” business is profitable. This often turns them into the junior partners of capital rather than true representatives of the working-class, so they end up overseeing and implementing cuts to jobs and working conditions rather than leading the fight against them. This is in contrast to the militant traditions of auto workers historically as well as the preparedness to fight seen recently in the successful strikes in at the Slovakian VW-plant winning a pay rise of 13.5% and the Hungarian Audi-plant winning over 18% as well as the 40 day-long GM that shock the USA in 2019.

Struggling for democratic unions that truly represent their workers will be a key component in both the fight against climate change and for a better future for workers in the auto industry.

Ultimately it will be necessary to organize on a political level in fighting workers’ parties, from the local all the way to the international, to build the fight for a better future for us all. Power needs to be taken away from the automotive and energy conglomerates and put in the hands of working people. If we fight for a socialist future, we can win.