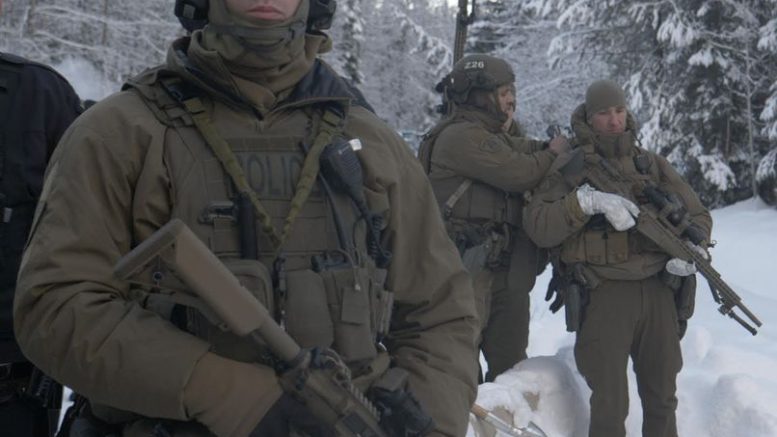 Early on Thursday, February 6, the RCMP (Canada’s police) launched a military style assault on the traditional territory of the Wet’suwet’en in north western British Columbia (BC).

The Wet’suwet’en, led by their traditional chiefs, have set up camps to peacefully claim their control of this territory, land that has never been relinquished by treaty. The hereditary chiefs are a traditional government structured on a matrilineal basis that predates the band council system set up under the Indian Act. They are objecting to a gas pipeline that Coastal GasLink wants to build through their homelands to move fracked natural gas to an export terminal.

The Wet’suwet’en hereditary chiefs and Indigenous and non-Indigenous supporters are under siege.

The RCMP sealed off the area, refusing access to the Wet’suwet’en chiefs, land defenders and media. They used helicopters and bulldozers to impose a court injunction that allows Coastal GasLink access. The situation on the ground is changing by the hour. On the morning of February 8, RCMP officers landed at the gates of Unist’ot’en Village by helicopter. As of February 8, police have arrested at least 20 people and were openly carrying weapons, including assault rifles. Some were wearing masks and had their identification numbers hidden.

Freda Huson, director of the Unist’ot’en Healing Centre spoke on Saturday February 8 in response to the RCMP, “Shame on you Canada. Shame on you Justin Trudeau [Canada’s Prime Minister]. Shame on you John Horgan [BC’s Premier], when you spoke of reconciliation in our feast hall, and you basically spit in my chiefs’ face by refusing to talk to them.”

Unist’ot’en matriarchs and indigenous supporters were in ceremony, refusing to talk to police. They burned the injunction and erected a traditional funeral pyre with a homemade flag on top that read “Reconciliation is Dead.”

All levels of government in Canada have been talking about the importance of “reconciliation” between Indigenous and non-Indigenous people, about building a new relationship of respect.

Despite all of the rhetoric about reconciliation, not much has changed in Canada’s relationship with Indigenous peoples. It is still about the land. The state will go to almost any length to secure access to resources and land for capitalist industry.

“Violence towards Indigenous people, personal, institutional and state-sanctioned, is woven into the very fabric of Canadian life, both its history and its present, says Bruce McIvor, a Métis lawyer who works extensively with First Nations across the country, “With this week’s RCMP raid on the Wet’suwet’en, violence has also become the hallmark of reconciliation.”

Many Canadians were shocked at The Guardian’s recent revelations about the RCMP’s plans in January 2019 to enforce a court injunction and remove the blockade put up by the Wet’suwet’en. However, Marxists understand that the RCMP is an instrument of state oppression and the briefing notes prepared by the RCMP make this clear. Officers were encouraged to “use as much violence toward the gate as you want” and maintained that arrests would be necessary for “sterilizing [the] site.”

According to Shiri Pasternak, research director at Ryerson University’s Yellowhead Institute, “the Canadian government has tightened internal control over the surveillance of Indigenous peoples and more closely integrated industry and security imperatives, which has included sharing classified intelligence across law enforcement agencies and with industry actors.”

An illustration of government hypocrisy towards Indigenous peoples was the BC NDP’s introduction, with great fanfare, of Bill 41, Declaration on the Rights of Indigenous Peoples Act which was passed into law in November 2019. The Article 27 reads: “States shall establish and implement, in conjunction with indigenous peoples concerned, a fair, independent, impartial, open and transparent process, giving due recognition to indigenous peoples’ laws, traditions, customs and land tenure systems, to recognize and adjudicate the rights of indigenous peoples pertaining to their lands, territories and resources, including those which were traditionally owned or otherwise occupied or used. Indigenous peoples shall have the right to participate in this process.”

Yet just two months later, on December 31, the BC Supreme Court granted another injunction allowing Coastal GasLink to access Wet’suwet’en territory, over the objections of the Wet’suwet’en chiefs. The 670-kilometer pipeline, approved by the BC NDP, will extend from northeastern BC to Kitimat, where a $18 billion liquefied natural-gas export plant is under construction.

There is strong support in communities across Canada and internationally for the We’suwet’en. In Canada, government offices have been occupied, a BC Ferries terminal and VIA rail lines blocked and in Vancouver, the Port of Vancouver has been blockaded three days in a row. Rallies have been held across the country and on February 9, there is an International Day of Action #AllEyesOnWetsuweten called for by Idle No More and other organizations. The Wet’suwet’en’s allies include those who oppose more pipelines as well as those who support the rights of Indigenous peoples to self-determination.

A fundamental contradiction exists between Indigenous views of land and those of capitalist industry. For industry, it’s about private property and extracting as much value from the land as possible to make a profit. Governments, as allies of industry, structure the laws and use the police and courts to ensure profits for industry. Indigenous peoples have used the land in a sustainable way for millennia so it, in turn, can sustain future generations. A socialist world would use the land and resources sustainably so that future generations have their needs met without destroying the planet. We stand in solidarity with the Wet’suwet’en and other Indigenous peoples who are struggling for their future and the future of generations to come.

For updates and to send messages of support: http://unistoten.camp/