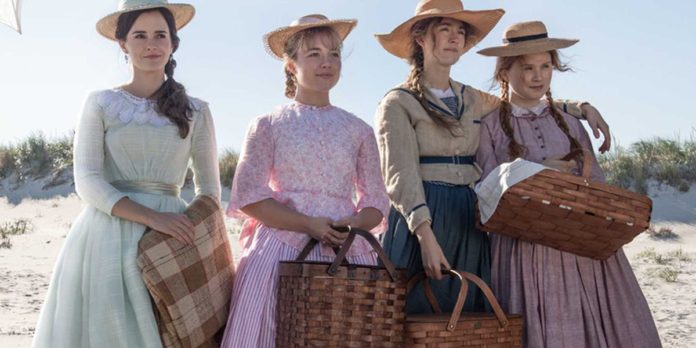 Greta Gerwig’s new adaptation of Little Women has struck a resounding chord with audiences, particularly young women. Why does this book continue to resonate with us one hundred and fifty years later, and what did this latest version bring us?

While a multitude of texts analyze or glorify war, few stories in literature have focused on exploring developments in the lives of the people left at home. Louisa May Alcott’s novel Little Women stands out for its frequent revivals, with numerous film and stage adaptations, and has been continuously in print since its first publication. Louisa May Alcott’s life is being re-explored today thanks to director Greta Gerwig’s recently released, artful, and modern adaptation of Alcott’s famous novel. Little Women is not a feminist guide to action. However, its focus on a group of women during a period of historic social upheaval has gained an enduring echo with the political radicalization of young, working class people today.

“I like good strong words that mean something…” – Louisa May Alcott

Written over ten weeks in May 1868 following the U.S. Civil War, Little Women was instantly popular, perhaps because young women connected to the collective family built by the March sisters. Notably, the story doesn’t feature a dominant male figure. Despite war being a time of austerity, home front stories like Alcott’s are often marked by women experiencing a time of greater independence.

Promoting the movie, director Greta Gerwig notes that, “As a girl, my heroine was Jo… As a woman, it’s Louisa May Alcott.” The picture that Alcott painted in Little Women was far more economically stable than her reality. Alcott came from radical roots and her father, Bronson Alcott, was an early utopian socialist who refused to work for wages and fought for public education for all people. Her family was very poor, with Louisa working as a servant, a seamstress, a laundress, before making money writing pulp fiction under a pseudonym.

Some of the sexism Alcott battled as a writer aren’t far off from the struggles for equality facing women in 2020. Gerwig’s adaption is strikingly relevant to a generation of women standing up to the rape culture bred by capitalism. As a result of capitalism’s global weaknesses since the economic crisis, Millennials and Generation Z – known as zoomers – are becoming the most class conscious generations, galvanized in battles against inequality and more open to socialist ideas.

Unlike other adaptations that have opted for linear retelling, the film’s structure takes a more dialectical approach to Alcott’s story. While a chronological retelling accentuates the character’s loss of girlhood, Gerwig divulges the story of the March sisters based on the emotional impact of the girl’s memories, quietly linking moments so adeptly that the seams are sometimes invisible. The effect of placing the childhood scenes shown in flashback puts the adult Jo (Saoirse Ronan) in the driver’s seat of the story. This allows Gerwig to tell the story of Jo and her sister’s by the struggles that shaped them. As the New York Times put it, “Gerwig’s film is less an update than it is an excavation — a kind of literary investigation of the characters, and their writer, and what they all really wanted.” In this way, the March sisters become multi-dimensional unlike any other adaptation to date: their deep camaraderie and Gerwig’s cinematography helps to trace the evolution of the adult from the child.

In Gerwig’s adaptation, all of the March family characters are rounded-out, highlighting challenges and limitations faced by a section of mainly white women in mid-19th century society. While Meg (Emma Watson) exemplified a sense of duty and social norms of the time, her marriage is challenged by poverty, and isn’t a fairytale; Amy (Pough) is given greater depth than in past adaptations, with more developed dialogue about society, propriety, and the negligible options women faced beyond attempts to marry well (and even the slut-shaming that accompanied trying to marry well); Beth’s dialogue established a more sophisticated but shy wisdom than her character is usually allowed – commonly portrayed as little more than an angelic and sickly shadow of a stunted childhood. Rather than limiting Beth (played by Eliza Scanlen) to martyr-like lines of “I am not afraid to die” and backgrounding her as other versions have, Gerwig’s use of layered dialogue with the four women interacting almost feels unscripted, and gives a vibrancy to Beth as a key player in the family cohort. Even as she grows more ill, her time with Jo is spent on the beach in conversation. The scenes of the family’s grief translated poignantly to the audience, as undoubtedly readers were moved by Beth’s innocent death in Alcott’s post-Civil War world, in which the country was coming to terms with the trauma of losing over one million people over the course of the four-year war.

Alcott was raised in a family that was radicalized by this period of history. She was raised as a feminist and anti-racist who never married and was the first woman registered to vote in Concord, Masachusettes. The Alcott family home was a station on the Underground Railroad. She used her own family experiences to provide depth to her characters.

Marx and Engles believed the American Civil War to be the most important event in the 19th century. In 1860, Karl Marx wrote to Frederick Engels that “the biggest things that are happening in the world today are on the one hand the movement of the slaves in America started by the death of John Brown and, on the other, the movement of the serfs in Russia.” Victor Hugo’s Les Miserables was published in 1862, an early socialistic condemnation of dramatic inequality in France: only 9 years later, the revolutionary Paris Commune ran Paris for 72 days. Movements demanding rights for oppressed people in society, including women and former slaves, played a huge role in pushing forward revolutionary struggles in this period.

Reconstruction was a volatile period. In 1868, the notoriously racist Andrew Johnson became the first U.S. president to be impeached by Congress: in part for not carrying forward the mandates of Reconstruction and showing too much leniency to the southern Confederate elite, doing all possible to waylay improving the material conditions and rights to formerly enslaved people. The Radical Republicans came out of the political polarization that led to the Civil War, as did the diffuse but highly organized abolitionist movement that took on the slave-holding southern plantations. During Reconstruction, there was broad debate on the way forward for northern capitalists in finance and industry, and the wealthy southern slave-owning class. After the consolidation of capitalist rule over the country, Reconstructionist policies were abandoned in favor of the racist and divisive Jim Crow laws.

The ruling class today has fewer tools at its disposal to grant reforms or maintain stability than the post-war period of explosive, unfettered capitalism that began the Gilded Age; however, there are some parallels.

Today, the tech boom of Amazon and Google has created billionaires and revolutionary technology on the one side, but an oligarchy of CEOs like Bill Gates and Jeff Bezos on the other, who fight government regulation, demand public investment and tax breaks to subsidize their profits, and have created modern “company towns” in places like Silicon Valley and Seattle. There’s a growing lack of faith in ruling class institutions: the latest Edelman Trust Barometer found 56% of people surveyed believe that capitalism is “doing more harm than good in its current form”. The political establishment in the U.S. is facing challenges in the form of Trump’s bigoted administration and the racist right that it has emboldened, and from the left in Bernie Sanders’ grassroots political revolution. As a result, we may see splits in either the Democratic Party, the Republican Party – or both – in the coming years.

“I Am Angry Nearly Every Day”

Pivotal to Gerwig’s retelling is the compassionate leadership from Marmee (played by Laura Dern), whose active matriarchal role is central to the 2020 narrative. Marmee’s screen time is a study in enduring gender inequality. She is based on Louisa’s own mother May, an abolitionist, a suffragette and Massachussettes’ first social worker. In her introductory scene, Marmee cries privately after she couldn’t save the Hummel baby from dying in poverty, not unlike the struggle of millions of nurses who daily face the impacts of scarcity and budget cuts. In one vital scene, Marmee tells Jo, “I am angry nearly everyday of my life but I’ve learned not to show it. And I still hope not to feel it.” These lines have been absent in previous adaptations; their inclusion is a statement on Gerwig’s sharp approach, connecting to an audience in a moment of resurging feminist ideas.

Alcott’s journal also reveals that she did not want Jo to marry, and explicitly denied her audience a marriage between Laurie and Jo. Gerwig’s ending acknowledges this dilemma Alcott faced by creating an ending of two paths, the path the book treads and the path the author wanted us to take. In the film, Jo breaks the fourth wall (appearing to take on an Alcott-like narrative role in that moment) and addresses the audience about not wanting to marry off her heroine, as the writer of her sister’s stories in the wake of Beth’s death. This cuts to Jo negotiating with her publisher, perhaps a mirror of Alcott’s experience: because Alcott retained the rights to Little Women, the novel’s success sustained her family for a generation or more. The movie’s ending stays both authentic to the book and authentic to the actual life Alcott lived.

Additionally, the film depicts Jo and Professor Bhaer in a relationship as intellectual equals. Alongside a few pivotal lines of dialogue, this seems like a deliberate attempt to connect this film more explicitly to Alcott’s real life. Some scholars write that Bhaer is based on Alcott’s teacher, the famous New England transcendentalist Ralph Waldo Emerson, who was a friend of her father’s and fan of Goethe (Bhaer is a German teacher identified with Goethe in the book). Gerwig gives Alcott’s reluctance to marry off her heroine added strength by at least pointing toward the equality of their relationship, and at most including dialogue acknowledging that Alcott’s awareness that women were capable of more than being resigned to frustrations and homemaking. After Beth’s death, Jo says “I’d rather be an old spinster and paddle my own canoe,” a line directly from the author’s letters.

Over 150 years later, women are continuously forced to make the case for equal rights under capitalism. Google and McDonalds workers had to walk off the job against sexual harassment in 2017. Women-dominated industries have taken inspired, bold action for equal pay and better working conditions, from educators to nurses to the mostly immigrant workers in Amazon warehouses, as in Minnesota. Women are at the forefront of broader labor movements across the globe.

For millenials like Gerwig, our lives are shaped by the recession, the climate crisis, social movements like #MeToo, Black Lives Matter, the fight for $15 an hour minimum wage, and the resurgence of socialist ideas marked by the Bernie Sanders phenomena. Gerwig’s is the first generation that will be worse off than their parents.

The fight against inequality and capitalism is front and center today, and even the re-telling of a story over 150 years old can reach new audiences by underscoring its themes of feminism and solidarity. Alcott’s work brings focus not only to the historical struggles of women, but to the specific struggles of women artists and authors.

The triumph of Greta Gerwig’s homage to Louisa May Alcott, though not a Marxist or revolutionary work, is in its ability to connect modern viewers to a historical struggle: bringing the past alive by connecting it to the current political and social concerns of today’s viewers.