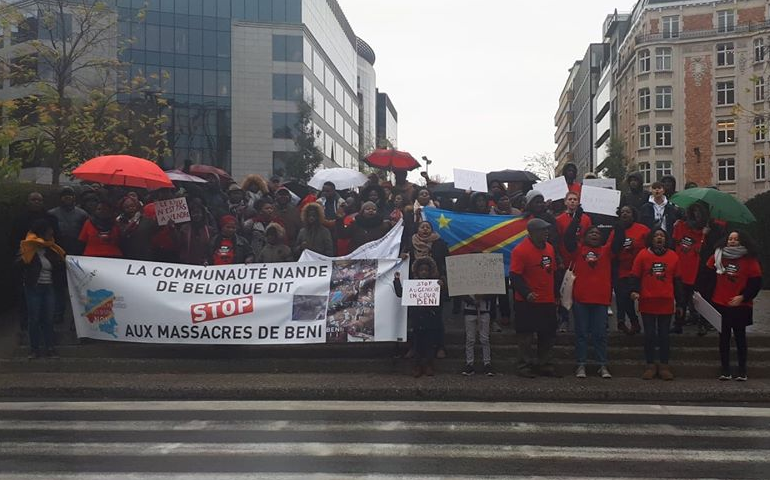 Alain Mandiki is a socialist and trade union activist from Belgium. Originally from North Kivu he has written numerous articles on Africa, including a long series on the 1994 genocide in Rwanda. In the context of a protest in front of the European Parliament against the genocide in Beni, Eastern Congo, we spoke with him.

There are massacres in eastern Congo, but they are hardly mentioned in the international media. Can you explain what is happening?

“For several years now, a series of massacres have been taking place in the East of Congo, particularly in the former Kivu province. In the last few weeks, it is particularly the area around the town of Beni in North Kivu that has been affected, as well as Bunia, in Ituri. A huge number of people have been murdered. It is very serious and far too little has been said about it. The killings are often also accompanied by mass rape, and entire villages are looted or even burned down. Many families have lost relatives and are often forced to flee, creating a problem of waves of refugees throughout the region.

“These massacres are the result of the fact that there are several armed groups in the region fighting for the control of resources and territories. These are the Armed Forces of the DRC (Democratic Republic of Congo), Allied Democratic Forces – National Army for the Liberation of Uganda (originally from Uganda), Democratic Forces for the Liberation of Rwanda, National Council for Renewal and Democracy, Mayi-Mayi, and others. The aim of the killings is the appropriation of resources, i.e. agricultural land, precious wood, mines, oil.

“This has various consequences. There are, of course, consequences on the human level, with these killings and enslavement, as well as population displacements. It is also a destruction of the local economic fabric, because the whole structure of society is redirected towards satisfying the resource needs of large multinational corporations. The population is being exploited in this sense, especially in mining. As a result of this unrest, 25% of the Virunga National Park has been downgraded by the Congolese state for the exploitation of oil reserves.”

How are multinational companies benefiting from the situation?

“In recent years we have seen a boom in the telephony sector with smartphones, but also the development of artificial intelligence. There is competition between major economic powers to develop high-capacity computers. In the background, these developments require minerals such as cobalt and copper, which are found in Katanga, and coltan and tungsten, which are found in eastern Congo. In order to be able to appropriate a part of the revenues from this trade, the armed groups, representing different local economic groups, are in business relations and at the same time in competition with each other.”

What is the attitude of the Congolese state?

“In 2006, when Kabila started his first official mandate, one of his 5 main objectives was stability in the East and the ‘recovery of national sovereignty’. After 12 years of presence in power, this project has completely failed, as did the others. In reality, the problem is complex. Between 2001 and 2006, in order to resolve the armed tensions in the country, there was the formula of one president and four vice-presidents, the merging of the army and the process called DDR: ‘Disarmament, Demobilization and Reintegration’. But the new form of national army thus created inherited the divisions of the 1+4 formula. Each entity works to defend its interests that are at odds with those of the majority of the population.

“For example, in 2009, Global Witness published a report on collusion, in the context of the exploitation of mineral wealth, between certain senior officers of the Congolese Armed Forces and the DFLR, Democratic Forces for the Liberation of Rwanda. This is an armed group which was built up notably on the basis of ex-genocidaires who fled Rwanda after the tragic events of 1994. The Congolese army is not the only one to have collaborated with the FDLR. In the same study, the Kagame regime in Rwanda is accused of having collaborated with them.”

Why is there criticism of the attitude of MONUSCO, the United Nations Organization Stabilization Mission in the Democratic Republic of the Congo? There is a growing demand for its departure?

“Over the past 20 years, MONUSCO has proven its ineffectiveness. Until a few years ago, it was the largest UN operation in the world, both in terms of personnel and budget. One of the explicit missions in its mandate was the protection of the population and the possibility to arrest the perpetrators of the massacres to bring them to justice. Some of the massacres took place near MONUSCO bases that could have responded. MONUSCO has never tried to stop the exploitation of the population, for example of the miners, and has given free rein to the interests of the multinationals in the region. One can therefore rightly conclude that such operations and forces are not useful for defending the interests of the population on the ground.

“Other experiences also showed that we cannot rely on military operations, such as those of imperialist powers such as France. That country has been involved in Operation Serval in Mali since 2013, which subsequently became Barkhane and will tomorrow be Takuba. Despite the deployment of military forces, Mali and the Sahel region are experiencing increasing instability. No military operation can tackle the social problems, land grabbing, mass unemployment, lack of opportunities for youth, lack of access to basic services and care. These problems, combined with imperialist interventions in Libya and previously the civil war in Algeria until 2002, have laid the foundations for the destabilization of Mali and the entire Sahel region. And despite France’s military presence, the massacres continue in the Sahel. The aim of the military operation is not to meet the needs of the population, but to guarantee access to raw materials such as uranium in Niger. It is the French group Orano, formerly Areva, that operates the mines in this country. And finally, it allows attempts to keep the migration under control. We can generalize this reflection to all such interventions, regardless of imperialist power.”

How does the refugee problem arise?

“On the basis of the development of the crisis in recent decades, the refugee issue has become extremely sensitive and is being used as a playing card by the various regimes. In 1994, after the defeat of the Habyarimana regime in Rwanda after the civil war and genocide, a large part of the members of the regime fled to Eastern Congo. They were protected by France and welcomed by the Mobutu regime, which itself played the card of communal tensions in order to maintain its rule. Add to this the opponents of the Museveni dictatorship in Uganda who gained a foothold in the region by organizing guerrilla bands. All this laid the basis for tensions that transcend borders throughout the region. The presence of these groups was the argument used by Kagame and Museveni to intervene militarily in neighboring Congo and, more importantly, to secure access to the raw materials and resources in Congo.

“There are several hundred thousand or even millions of migrants, including some war criminals, who have settled in the region. In the course of the various military operations, none of the parties has addressed this situation. As a result, it is the local population that is affected on a daily basis. And this in a context of shortages and a terrible lack of public services.”

How can this violence and its consequences be brought to an end?

“As part of the fight against Kabila’s third mandate, several groups organized actions. There were demonstrations, sit-ins and calls for ‘dead cities’ (‘villes mortes’). In addition to the demands for Kabila’s departure, there was anger about the lack of progress in the areas of economy and security. These mobilizations were present throughout the country and even in the diaspora. They crossed the borders of provinces and communities. Only by building this kind of movements can there can be a beginning of perspectives for all communities.

“It is often said that money is the motive of war. Struggle and mobilizations must be aimed at taking resources from the hands of the multinationals and the various armed groups: both the raw materials and the labour force that is exploited on a daily basis.

“Movements are an opportunity to discuss how workers in the mining sector can defend themselves against exploitation by armed groups, and how to address the collective social needs that mining in the region could meet. This should not only be done in the mines, but in fact throughout the country and the whole region. The management and control of the produced wealth, and its orientation towards the needs of the vast majority of the population, is what is needed.

“The class struggle determines the course of history. In this struggle we rely on the majority of the population fighting against the oppression by a minority, to respond to the problems and contradictions of capitalism. This approach excludes any sectarian division of society. It proposes a program aimed at the unity of all the exploited and oppressed strata, based on the premise that only the working and poor can build a society in which the needs of the whole population are met. It is for such a democratic socialist society that we are fighting internationally.”