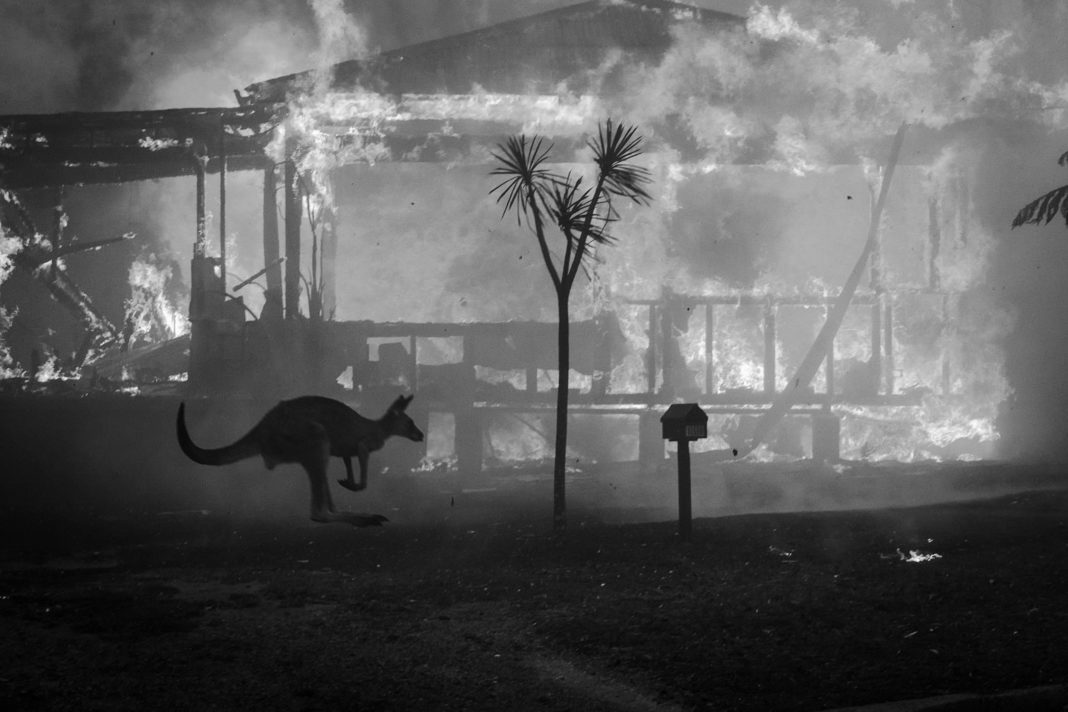 Based on reports by Socialist Action (CWI Australia)

Demonstrations swept Australia in January as tens of thousands turned out against Prime Minister Scott Morrison’s government in the wake of the bushfire crisis.

Since September, the bushfires in Australia have gripped the world’s attention. Record-breaking heat waves and months of drought created the conditions for massive blazes across the country. The scale of the fires is unprecedented, affecting every state on the continent. At the time of writing, almost 25 million acres have burned – over six times the size of the 2019 fires in the Amazon rainforest.

As this disaster unfolds, the Liberal-National coalition government is asleep at the wheel. Like Emperor Nero fiddling while Rome burned, Prime Minister Scott Morrison holidayed in Hawaii during a state of emergency, prompting widespread public condemnation. To many people, Morrison’s holiday summed up the callous attitude of a government that refuses to do anything about global warming even as its effects become undeniable.

At the demonstrations, protesters chanted for Morrison to step down, for an increase in fire service funding, and for drastic action on climate change. National estimates say over 100,000 turned out, a significant attendance relative to Australia’s small population of 25 million.

January 10, was designated a national day of action. In Sydney up to 50,000 took part, more than attended recent climate strikes. Meanwhile in Melbourne somewhere around 30,000 participated despite hours of pouring rain.

Follow up protests of several thousand took place in major capital cities again in the week after. Demonstrators came out in Sydney on Wednesday evening, in Brisbane, Adelaide, and Canberra on Friday evening and in Melbourne and Perth on Saturday.

What We Call For

These mass mobilizations are indicative of the simmering anger in society that must be harnessed to build a serious movement capable of transforming the situation.

In addition to more student strikes, trade unions need to spearhead this movement by stepping up to organize collective workplace action. Walk-outs by construction, maritime, and electrical workers in Sydney have already taken place on health and safety grounds in response to the toxic smoke.

These small-scale work stoppages should be escalated into a national strike of workers and students to demand immediate funding for fire services and action on climate change. A mass strike and protests to shut down the economy for even one day would put immense pressure on the government.

Capitalism is to Blame

Ultimately, dealing with the climate crisis and its disastrous consequences requires a radical restructuring of the economy. It is clear that as long as society’s wealth, resources, and industries are privately owned, corporations will put their own profit interests ahead of the interests of the community.

To even begin tackling this emergency we need public ownership and control of the key parts of the economy. For example, if we brought the big oil, gas, and mining companies into public hands we could begin a planned transition to renewable energy. Instead of cutting jobs, workers in those industries could be retrained and deployed to sustainable jobs elsewhere.

We cannot rely on the private sector to make important decisions about our environment and livelihoods. A democratic socialist plan of production, involving workers in all sectors, is urgently necessary. Climate change poses huge challenges – capitalism cannot meet them.