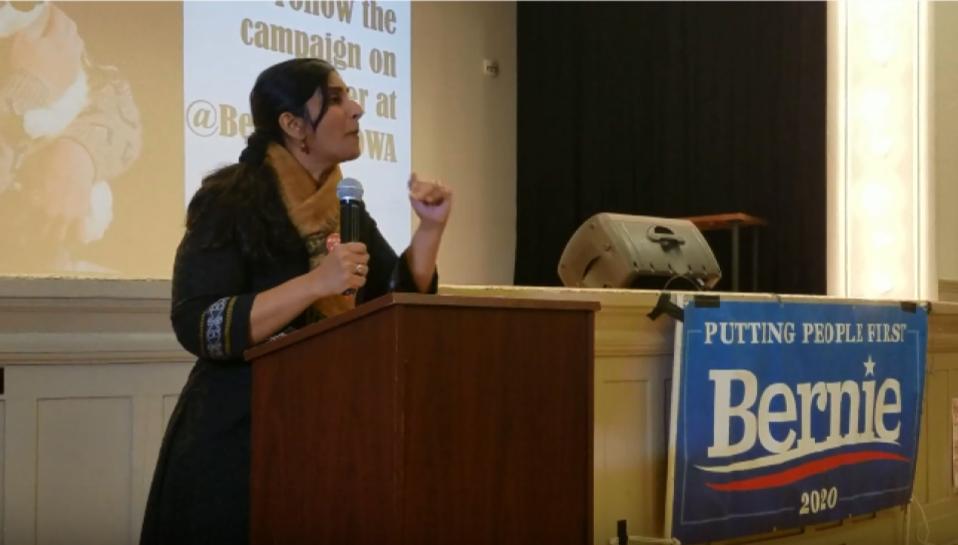 On January 9th, over 400 people turned out to Washington Hall in Seattle for a rally kicking off the Bernie Campaign in Washington State. The energy in the room was electric – attendees arrived decked-out in Bernie gear  with signs calling for Medicare for All and No War in Iran, eager to begin phone banking and door knocking. For many, this is their first time volunteering for a campaign.It’s clear that Sanders’ bold appeals to the needs of ordinary working people have mobilized a new layer into getting directly involved.

Socialist Alternative has already begun mobilizing our membership in cities all over the country for the Sanders campaign- so we were very excited to gather with so many working people in Washington who are inspired to help fight for Sanders’s progressive program! Our members came to the rally with flyers and sign-up sheets announcing our Tax Amazon 2020 campaign and inviting attendees to get involved in the fight. The plan to renew the Seattle fight for an Amazon Tax got an overwhelming response. Bernie supporters agreed wholeheartedly that getting organized to fight for a Sanders presidency also requires  that we get organized and fight for his program, a central plank of which is taxing big business. Furthermore, after November’s extremely contentious City Council elections in which Amazon dropped an unprecedented $1.5 million in corporate PAC money, Bernie supporters in Seattle have first hand experience with how far big business is prepared to go to buy elections and see the necessity of challenging corporate interests head on.

A diverse array of speakers including progressive politicians, youth climate activists, educators, Bernie organizers, rank and file Democrats, and socialists fired up the crowd with impassioned endorsements and calls to action. One of the major themes of the night was that Bernie is the candidate who stands the best chance at defeating Donald Trump. Bernie’s progressive platform of Medicare-for-All, a Green New Deal, and cancelling student debt inspire working people to turn out and vote. Furthermore, speakers like DSA member Shaun Scott and teacher activist Jesse Hagopian emphasized that the Bernie campaign represents more than a single election: it’s t a multi-generational, multi-racial movement from below for lasting systemic change.

Socialist Alternative member and Seattle City Councilmember Kshama Sawant spoke last, summing up the empowered mood of the evening and emphasizing the historic opportunity in the campaign and the tasks ahead. Speaking to the incredible rise in struggle over the last year, Kshama pointed to the mass-movements in Chile, Hong-Kong, Lebanon, Iraq, and Iran as just a few examples of how ordinary working people internationally are rising up against the failure of global capitalism. That process is being mirrored in the United States with the incredible surge of grassroots support for Sanders’ democratic socialist campaign.

Kshama also warned that Bernie supporters must have a sober understanding of the challenges facing the movement. With their media blackout strategy failing, the corporate media are preparing to go on the offensive against Sanders with accusations of being too extreme or divisive and anything else they believe might damage him. In addition, the political representatives of the billionaire class within the Democratic Party are gearing up to use the levers of their party apparatus to undermine Sanders’ however they can. Kshama’s call for the creation of a new party for working people based on the movement of Sanders supporters was greeted with applause, as was her call to join her, along with International President of the Association of Flight Attendants Sarah Nelson, and Socialist Alternative at the launch of the Tax Amazon campaign on January 13th!

The rally concluded with attendees joining together in a chant in preparation to hit the streets and the phones for Bernie in the first round of canvassing this weekend.